Two of Arkansas’ largest metro areas continued to see economic improvements during the second quarter of 2015, with the Fort Smith metro economy falling back slightly because of poor job growth and a decline in building activity. The second quarter follows a first quarter in which all three metro areas posted year-over-year gains. 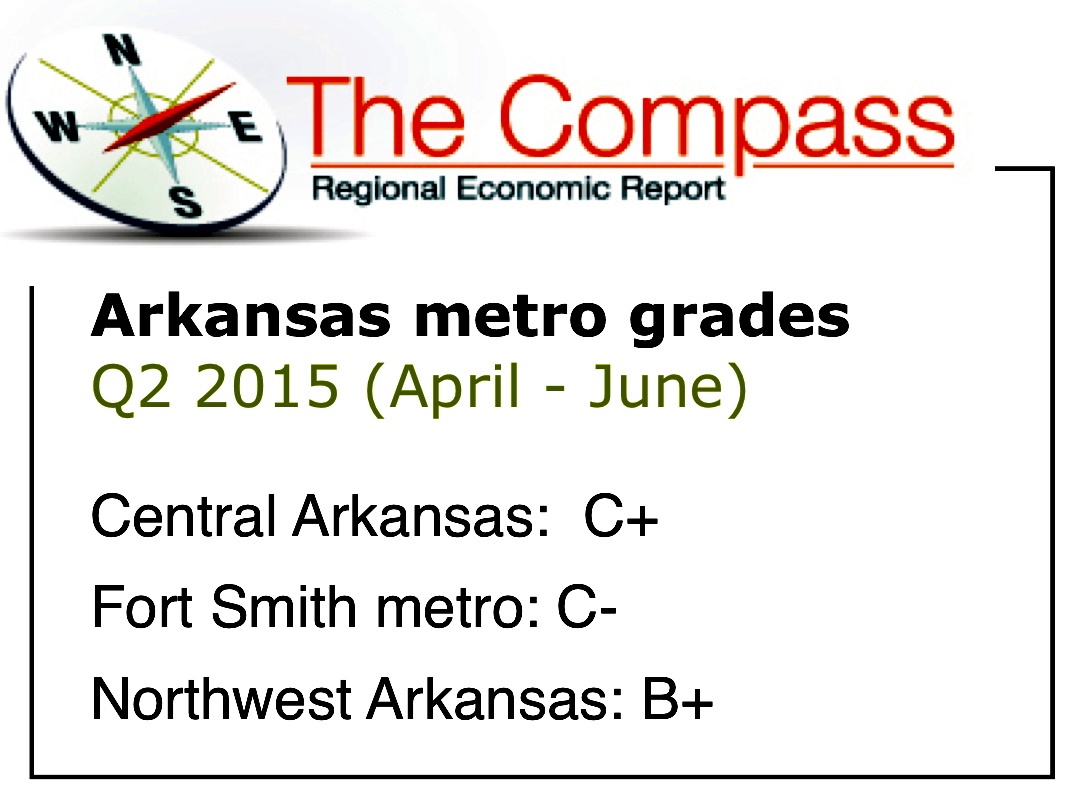 The broader national economy also continues to do well, albeit at a modest pace. The second half of 2015 is likely to see the growth continue thanks to gains in incomes and employment, and positive market conditions for the housing industry, said Jeff Collins, the economist for Talk Business & Politics who gathers the extensive data used in The Compass Report. He also is a former director of the Center for Business and Economic Research at the University of Arkansas.

Of the 387 MSAs (metropolitan areas) in the country, only 5 posted rates above 10% in June and 6 had rates below 3%. No Arkansas MSA had a rate above 8%,” Collins noted in the second quarter report. “Non-farm employment has grown for the last 19 quarters. The economy created roughly 692,000 non-farm jobs in the second quarter after creating 586,000 in the first quarter.”

Collins also said low and declining fuel prices “are like a tax holiday for the consumer.” In addition to lower fuel prices, Collins noted that consumer demand continues to grow, with consumption expenditures up 3.6% in the second quarter compared to a 1.8% gain in the first quarter. 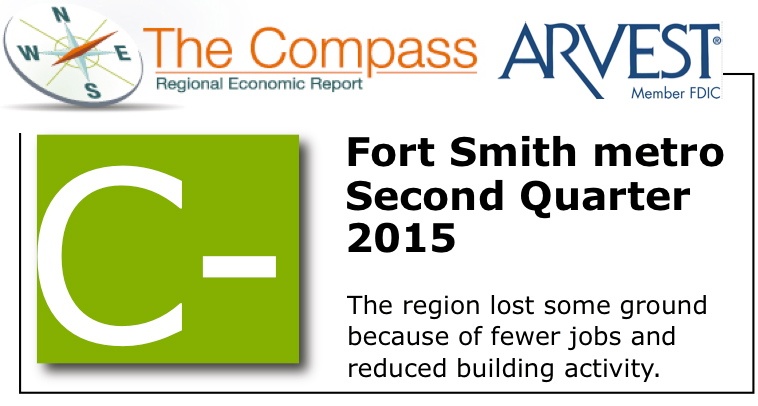 Residential construction as measured by number of permits and value was down significantly quarter-on-quarter – 30% and 39%, respectively. Sales and use tax revenues, reported by the Arkansas Department of Finance and Administration, were down quarter-on-quarter 1% after adjusting for the increased rate in Crawford County.

The Fort Smith region has struggled to regain jobs lost during the Great Recession. The June 2015 report from the federal Bureau of Labor Statistics shows 115,084 jobs in the metro area, down more than 10,000 jobs compared to June 2006 when an estimated 125,426 people had jobs in the area.

“Data for the Fort Smith regional economy had been mixed for some time. The obvious conclusion is that the region has stabilized but there is no obvious source of growth which could change the current trend. Barring some unforeseen factor, look for the metro area economy to languish,” Collins noted in the report.

Mike Jacimore, sales manager for Arvest Bank in Fort Smith and the River Valley Region, said he remains upbeat about the future of the regional economy.

“Despite not being able to maintain some of the gains we as a region made in the first quarter, we are still encouraged by some of the indicators we’re seeing. As we’ve seen this year from the groundbreaking ceremonies by Arkansas Colleges of Health Education and ArcBest Corporation, Fort Smith is moving in a very positive direction which should help drive these indicators upward in the future. We are proud of Fort Smith and look forward to helping our customers and the region as a whole however we can,” Jacimore said.

Sales and use tax collection data indicate that Bentonville, Fayetteville, Springdale, and Rogers have experienced solid growth quarter-on-quarter. In percentage terms, Rogers experienced the strongest growth in collections (8.3%) while Fayetteville collected the most tax dollars of any of the four major municipalities – $10 million in the second quarter.

As he has for the past several quarters, Collins said there is no reason to believe the pace of growth in Northwest Arkansas will slow during the remainder of 2015.

Overall job gains, especially in the construction and tourism sectors, and stability in sales tax revenue helped the region to continue gains from the first quarter. There were 352,800 non-farm jobs in the region in June, ahead of the 346,700 in June 2014.

Comparing the most recent three-month period to the same period in 2014, sales and use tax data indicates that retail activity grew for the metro area by approximately 3.7%. The growth was led by Perry County. Collections were up quarter-on-quarter in all three major metros.

Collins said economic health for the central Arkansas metro is good for the entire state.

“Most recent economic data for Central Arkansas continues to be encouraging. The local economy had struggled to gain momentum, particularly given weak growth in the government sector. The declining unemployment rate and growth in non-farm employment are positive signs the region is returning to trend. Given the size and over-all importance of the metro to state economic performance, a return to trend growth is very positive news for the state,” Collins noted in his analysis.

U.S. ECONOMIC RISKS
Macro economic conditions always have an impact on Arkansas’ economy, and in his report Collins outlined several risks to the national economy. One of the biggest unknowns is consumer behavior.

Other risks include:
• While the unemployment rate has improved, it does not adequately tell the entire story. Reduced labor force participation, high unemployment rates for young and minority workers remain persistent problems.

• Income growth remains modest despite improvements in the labor market.

• The Federal Reserve has significantly reduced monetary stimulus in response to stabilized growth. However many economists are concerned about the impact on inflation of prolonged easy money.

• Low oil prices are like a tax break, but how long will they last?