Alia Borroho always dreamed of a career in the fashion industry or maybe in design. These are the kinds of things that girls dream of, at least that is what she thought. But dreams change.

The daughter of immigrant parents, Borroho navigated a few twists and turns before she ended up on Markham Street in downtown Little Rock, close to where she grew up.

Hers is a story of adversity, victory, friendship, support and thankfulness for the resources of the Arkansas startup ecosystem that helped her redefine her life and career.

Borroho’s parents moved to Arkansas from London. Her Irish mother began working at CHI St. Vincent where she helps educates patients on diabetes care. Her father, who is Morrocan, became an entrepreneur, successfully running A&C Borroho Painting, Inc. for 30 years.

FINDING HER WAY
Borroho’s journey took her to Fayetteville for college, back to Little Rock to finish school, and eventually to Los Angeles before she returned to Arkansas’ capital city. Along the wandering road, this 32-year old young lady struggled to find her place. Upon returning to Little Rock, she became a Certified Nursing Assistant at St. Vincent.

Following her CNA experience, Borroho experienced a traumatic brain injury suffered during a bad accident. She spent several weeks in ICU and struggled to regain her life after losing her ability to communicate. Further, she felt as if she lost her personality, describing the frustration of watching her family suffer while she pushed to regain her speech.

This dark turn complicated her life, but slowly she emerged, with the help of her family. Borroho says she emerged stronger from the adversity, returning to society with an insatiable taste for knowledge.

One day, a childhood friend of hers, brought her to The Venture Center in downtown Little Rock to listen to pitches from students of a pre-accelerator class. Watching the pitches impressed her. She loved the energy, the passion and enthusiasm. She was shocked by their ambition and determination, and intrigued by the startup sub-culture she never knew existed.

DIVING IN WITH BOTH FEET
Borroho found her place when she met the entrepreneur crowd. She became an honorary member at The Venture Center, which facilitates entrepreneurial activity and hosts the popular Wednesday morning 1 Million Cups networking event.

Early on, she met Jeston George, founder of Apptegy, a school-based startup that has developed products to help schools manage and distribute content for students, parents and supporters. George brought Borroho on staff to help with his young startup, which is based in Little Rock and has now outgrown The Venture Center’s startup space.

“Alia has a really good work ethic,” Jeston said. “She is very determined when she decides to go after something.”

While working for Apptegy at The Venture Center, Borroho became acquainted with other developers who share the space. She learned more about what the developers were doing and became interested in learning how she could write code as well.

Gov. Asa Hutchinson has embarked on a new school initiative to have high school students – and eventually younger – learn the basics of coding as a building block for jobs of the future.

Borroho, far past the high school deadline, decided to take code education into her own hands. She met Mary Dunlap, who came by The Venture Center to talk about the new coding school, The Iron Yard, a 12-week immersive coding school that just completed its first three-month intensive session at its downtown Little Rock facilities.

Borroho applied for and was offered a full scholarship by Winrock International for the inaugural class.

“It is the hardest thing I’ve ever done,” Borroho tells Talk Business & Politics. “It really is like a coding bootcamp.”

Later she would re-iterate, “I just thought they were being cute, calling it a ‘bootcamp,’ but it was really, really difficult. Every day, it crosses your mind to just throw in the towel, just give up, but we all arrived early and kept on working.”

While at the Iron Yard, she partnered with Scott Ferguson from the .Net class on their project – an app called Byrth, which is a labor tracker and communications system for expectant mothers.

Ferguson talked about the shared interest which enabled them to work together, “Alia and I worked together on the final project because we shared interest in healthcare management solutions. And I knew with her steel will we could accomplish an aggressive set of features in the short development window.”

Ferguson, a .NET developer, was impressed with the progress made by Borroho, one of three students in the class of a dozen who had no previous coding experience.

“Alia came to the Iron Yard as a true beginner in front-end development, and her progress in three months has been astounding.”

MOVING FORWARD
Now that Borroho has graduated The Iron Yard, she feels unstoppable. Currently, she is putting the finishing touches on the Techtober website and has been contacted by Asana about an opportunity on the West Coast.

Her education at The Iron Yard gave her a newfound amount of confidence.

“When I started, I was unsure, uncertain of my path,” she said, “but since this experience at The Iron Yard, I walk with purpose, I stand tall, my chin raised slightly. ”

It’s that kind of unyielding grit that she is displaying, one that connected her with many mentors and role models.

One of her mentors, Abby Sims has seen a big change in Borroho:

“When I met Alia, she was just considering joining The Iron Yard. She seemed fascinated with the idea of learning to code and changing her career. I recall she had a little negative feedback from peers in the beginning, which just seemed to bolster her desire to learn more. I didn’t know Alia long before she joined the program, but I will say I watched her rise up against societal norms and then endure through lots of challenges.”

Sims witnessed first hand the determination of Borroho, particularly with her desire to introduce coding to girls.

“Alia was an inspiration to the girls at the ‘100 Girls of Code’ workshop,” she recalled. “She is a great example of how someone, especially women, can not even know how fun software development is, how it’s not as hard as they think it is to learn, and how attainable jobs within the field are. On top of that, she helped show these young girls that some of the stereotypes about programmers – such as they are male, nerds, overweight, or introverts – are just that, stereotypes. You can be a woman and be into ‘feminine’ things and be a software developer,” Sims said.

Borroho also recalls the support she received from John Chamberlin, founder of financial tech giant Arkansas Systems, which later merged with Euronet’s worldwide operations. His company revolutionized bank ATM systems. Chamberlin is now a technology investor and serves on the investment committee of the Fund for Arkansas’s Future.

He noted that “it is wonderful to work with people with such energy, enthusiasm and potential” as Borroho, who also considers Jeston George and Ada Hollingsworth among her mentors.

For Borroho, she’s not sure where she’s going next. There’s the job offer out West, the app work with her Iron Yard partner Ferguson, and she’s always held in the back of her mind since she’s discovered her new career path the possibility of a foundation to encourage more females to learn to code.

“I do plan to move forward with this,” she emphasized.

There’s little doubt she will. 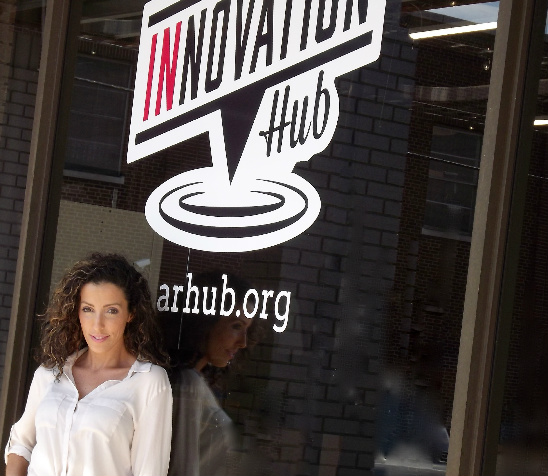