Correnti, 68, was the driving force for the $1.3 billion steel mill superproject, which is being built near Osceola (Mississippi Co.). As a former CEO of rival Nucor Steel, Correnti was a big fan of Arkansas where he once headed Nucor’s operations in the 1990’s.

Throughout his sales pitch in touting the Northeast Arkansas location for Big River Steel, Correnti referred to the region as “Steel Mill Heaven.”

His career in the steel industry began in 1969 with U.S. Steel where he served in construction management activities until 1980. He’s also done stints at the helm of SeverCorr, SteelCorr and Birmingham Steel.

When he was the President of Nucor Corp. from 1991 to 1999 and CEO from 1996 to 1999, he moved to Blytheville in Northeast Arkansas and has maintained a residence there.

In July, Correnti updated Osceola officials on the progress of the superproject, which is slated to open in July 2016. The Arkansas legislature approved a $125 million bond issue in the 2013 session for the project, which is expected to create 525 jobs at the mill. The 1,300-acre site is expected to employ up to 2,000 construction workers through the building phase.

A spokesperson for Big River Steel, Patty Rioux, provide this statement to TB&P regarding Correnti’s death.

“It is with the deepest sadness that we share news of the death of Big River Steel Chairman and Chief Executive Officer John Correnti. John was 68.

“John had a long and highly successful career in the steel industry. As the driving force behind numerous greenfield steel mill projects, John’s efforts led to the creation of thousands of high-paying jobs, an accomplishment that gave him great pride.

“John was recognized as an early adapter of new steelmaking technologies. Over the course of his career, John worked with a number of leading technology companies, including SMS Siemag, to continually improve the efficiency of steelmaking.

“Most recently, John and a group of strategic and financial investors founded Big River Steel to once again propel the industry forward. Big River Steel will be one of many legacies John leaves with us all. John was a visionary, an innovator and a leader who dedicated his career to improving the steel industry and creating opportunities for those that worked within it.

“Big River Steel will continue to be managed by its operating committee.”

“I am saddened to learn of the death of John Correnti. He has been called a ‘steel man’s steel man,’ and indeed his name was synonymous with the steel industry. I know that the team he put in place in Osceola will assure the success of Big River Steel, which will be one of John’s lasting legacies. We are grateful for his commitment to Arkansas and our thoughts and prayers are with his family and his extended family at Big River Steel.”

“We are extremely saddened to learn of the sudden passing of John Correnti. John was a visionary in the steel sector who was proud to call Arkansas home. We enjoyed working very closely with him on the Big River Steel project. He fought hard to make this project a reality for Arkansas. He built a strong management team and board that will be sure his vision for Big River Steel is realized. Our thoughts and prayers are with John’s family along with the entire team at Big River Steel.”

George Hopkins, executive director of the Arkansas Teachers’ Retirement System, which is an investor in Big River Steel, issued the following comment on Correnti’s death.

“It is a sad and difficult time for those of us who have worked with John Correnti to make Big River Steel a major force in Arkansas and the United States. Words cannot begin to describe the ‘bigger than life’ personality of John Correnti. He was affectionately, and sometimes not, called ‘the man of steel.’ He literally remade the steel industry in the United States. John Correnti had and has already put in place the ‘A Team’ of steel mill construction and management teams. The plan is now for the continued success of Big River Steel through construction and operation. The team he assembled will work tirelessly to make the success of Big River Steel one of John Correnti’s final and best legacies. I will be in Osceola tomorrow to help ensure all is calm and continuity is maintained despite this tragic loss. The team that has been assembled and principles of John Correnti will be strong and endure at Big River Steel. The same is true for Blue Oak. I can also assure you that some of the toughest, best, and strongest steel mill employees in the world are unashamedly holding each other and crying right now. Loyalty and love are hallmarks of a John Correnti crew. I know how they feel right now! My heart hurts.”

“For the better part of four years, I tried, unsuccessfully, to convince John Correnti to stop referring to the residents of Mississippi County as ‘farm boys and farm girls,’ but political correctness had no place in John’s approach to life, and he wasn’t having any of it.

“John grew up in a small, farming community. He understood rural America and the people who live there. He believed in them, their values and their work ethic; and time and again, throughout his career, he bet everything he had on them.

“He knew that he could take high school graduates, provide them with great technology and training and create the highest quality steel in the world. The companies that John built have manufactured an untold tonnage of steel over the years. It’s all around us – in buildings, bridges, cars and machines that will all now become part of John’s legacy. But the truest measure of John’s impact on this world lies with the hundreds of Americans who became the first in their family to attend college because Mom or Dad’s job in the steel mill paid for it.

“He always said, ‘if the shareholders get rich, it will be because our steel workers are making more money than they ever dreamed possible.’

“The steel industry took John Correnti out of a farm town, sent him around the world and made him rich. He never forgot it, and he spent his career working to bring those same opportunities to his fellow ‘farm boys and farm girls.'”

Clif Chitwood, executive director of Great River Economic Development Group, said Correnti had the common touch and was at ease with everyone from the business leader to the construction worker.

“He was a great man, his effect on life. I would say that he has had the greatest impact of anyone on Mississippi County since Robert E. Lee Wilson,” Chitwood said, noting Correnti played a role in building two steel mills for Nucor and the Big River Steel project. “The sheer number of jobs in this county, I would say, will be about 10,000 jobs which in this day and time is enormous. He will be missed.”

“At the groundbreaking last year, I referred to him as the ‘Godfather’ as a nickname in jest. His focus was on Mississippi County,” Kennemore said, noting he believes Correnti played a huge role in making Mississippi County the top steel producing county in America. “As a businessman, he wanted the business venture to be successful but he wanted people to be successful as well.” 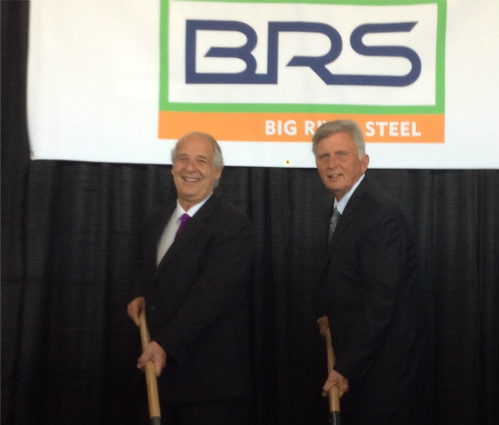