When disaster strikes anywhere in North America, from a train derailment in Quebec to an oil spill in Mayflower, it is more often than not an Arkansas company that is the first disaster response team on the scene.

CTEH, the Center for Toxicology and Environmental Health, is a North Little Rock company that saw a need in the market and filled it. In doing so, it has become a global leader in disaster response consulting and has created a high number of jobs requiring advanced education, according to Dr. Phil Goad, a partner and principal toxicologist at the company.

In all, the company has 140 employees and of those, 14 hold Ph.D.s, one is a medical doctor, two are attorneys, one is a registered nurse, and 15 have master’s degrees. About 84 percent of its workforce holds at least a bachelor’s degree with 27 percent of those having an advanced degree.

Goad said prior to the company’s founding in 1997, the four who would eventually become partners were doing consulting work in toxicology.

“We would deal with issues that would come our way that were related to what are the potential effects of chemicals in the workplace or in the environment,” he said. “And then somewhere around 1990 or so, while we were still with these previous organizations, we began to do emergency response beginning with the railroad industry.”

It was the work in emergency management consulting in the early 1990s that led to the creation of CTEH and its quick growth as a global leader in the field.

According to Goad, one of the services most often provided in disaster response is air quality monitoring, where the company detects chemicals that may have been released in a train derailment or other emergency situation. Air quality determines a disaster’s impact on the area for emergency personnel responding to the situation and provides in-depth analysis and understanding from near the beginning of the disaster until cleanup is complete.

“There was no organization that did that,” Goad said. “And so we were able to come in and begin to learn on the fly if you will, developing what have now really become standards around North America for responding to chemical release emergencies and how to perform the monitoring, how you collect the data and disseminate the data.”

CTEH is able to conduct its air monitoring using a variety of methods without having to put its own staff or others at risk, such as aerial balloons and quad copters that collect the data for analyzing.

And the work is done not just in emergencies, but at major sporting events and other locations where large numbers of people could be gathered, Goad said.

THE UAMS CONNECTION
The company’s founding, while possible in large part due to the educational and professional backgrounds of Goad and the original staff of nine, owes a lot of its ability to getting off the ground and becoming a long-term success to the University of Arkansas for Medical Sciences’ BioVentures business incubator.

According to Christopher Fesel, associate director and intellectual property counsel at UAMS BioVentures, the program is a technology licensing and business incubator that helps create jobs in Arkansas based around skills learned at the medical school and how those can be applied in life-saving ways.

“Basically, our goal is to ensure that the technological advancements that are a result of the research undergone here at the university and the hospitals, the VA hospital and at Arkansas Children’s, are used to the benefit of the public as soon as possible. We’re trying to save lives here,” Fesel said.

“The secondary purpose is trying to encourage the economic development of Little Rock and Arkansas as a whole by creating new companies and creating new job opportunities, as well as bringing some more financial revenue to the state and the region at the same time.”

Goad said the BioVentures program was a tool to help professors and employees “of the state to start businesses that would provide technology, jobs, opportunity and resources to the state of Arkansas.”

Fesel noted that each startup facilitated through BioVentures has a different business establishment with the business incubators, whether it be partial ownership of the companies or profit sharing, which would allow the university to see a return on investment and invest in additional startups that could also have a positive influence on the local economy.

According to Goad, CTEH’s partnership did not cede any ownership to UAMS but instead was based on a profit-sharing model.

“The services they provide to us included being able to rent offices from the campus there – the VA campus there adjacent to UAMS. We had access to the UAMS computer system and our phone system was through UAMS. They provided some assistance in developing business plans and communicating what we were doing. So they were an incubator for a new business that was forming, and we consider that program to have been a vital important part of our success.”

Fesel said what is so unique about the success of CTEH is how quickly the company was able to go from four co-founders and a startup staff of five additional employees to today’s current level of 140. He said much of it has to do with CTEH’s ability to create a service versus some of the biotech startups that have taken far longer to realize profits and establish a foothold in the market.

“Because we almost exclusively work in the biotech space, the timeline between company startup and profitability is longer than in almost any other industry due to the fact that we’re dealing with human health and that obviously means that virtually any activity or product that comes out of this technology has to be vetted and approved by the Food and Drug Administration, the FDA. And that, as you know from any experience in reading the news with regard to pharmaceuticals, for example, just takes quite a long time,” Fesel said.

“CTEH is probably our most successful with regard to employment as well as at this point most likely pure profitability, as well, partly because they’ve really seized the market and also because they’ve had quite a number of years of experience.”

Fesel said while many companies supported by BioVentures have had a difficult time with regulatory hurdles to overcome in attempts to get to market. It is estimated that the business incubator has had between an $80 million to $90 million economic impact on Central Arkansas. As long as companies such as CTEH continue to thrive, the impact would only grow as more well-educated individuals stay in Arkansas, shop in Arkansas and invest in Arkansas, he said.

Grant Tennille, executive director of the Arkansas Economic Development Commission, said CTEH’s success within a relatively short amount of time – 17 years – shows that Arkansas is able to support businesses with a global reach.

“You can succeed here,” Tennille said. “You can become a global leader from Arkansas and obviously we have some enormous examples of that, the two most famous being Wal-Mart and Tyson. But this is an example on a smaller scale where Arkansans, or people who were educated or working here, saw an opportunity and have risen to the top of the profession right here in Central Arkansas.

“This company coming out of BioVentures is an enormous success story.”

WHAT THE FUTURE HOLDS
As for the future of CTEH, Goad said he feels confident that the sky is the limit for the company as it approaches its 20th anniversary in just less than three years. He said the key was having the right people and servicing an industry that is still wildly underserved.

“And to this day, we’re really the only organization in North America that is able to provide the kind of resources we do on a 24/7, 365-day basis. Within two hours of a call, we can be in the air and sending our teams of toxicologists, industrial hygienists, problem specialists, if need be occupational health specialists, information technology specialists to respond to the site and begin collecting the kind of data that’s important for decision-makers in a chemical-release emergency.” 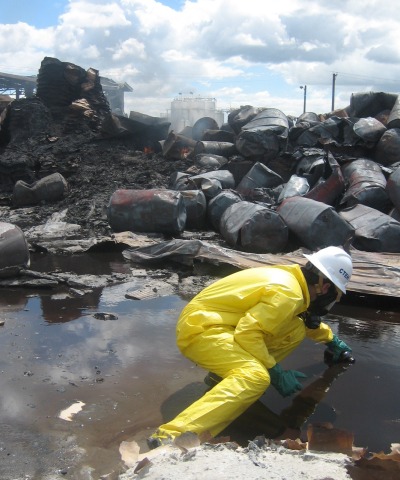