Every Wednesday night at The Joint in the Argenta neighborhood of North Little Rock, Improv Little Rock performs a 90-minute show of side-splitting laughter. What most of the people in audience don’t know is one of the men on stage is the Communications Director for Governor Mike Beebe, Matt DeCample. By contrast, for a long time, most of the people DeCample worked with in the administration didn’t know about his comedic hobby.

“On both sides of my life, people can’t believe the other side exists,” DeCample says. “It’s not the most common combination of day job and hobby.”

But it’s one that makes more sense than first meets the eye. The skill set required for Improv is very similar to the skill set needed to be an effective Communications Director: thinking on your feet, strong recall and the ability to laugh at yourself. A good dose of fearlessness never hurts either.

DeCample began working with Beebe as Communications Director when he was the state Attorney General. He remained on staff in the same capacity after Beebe was elected Governor. 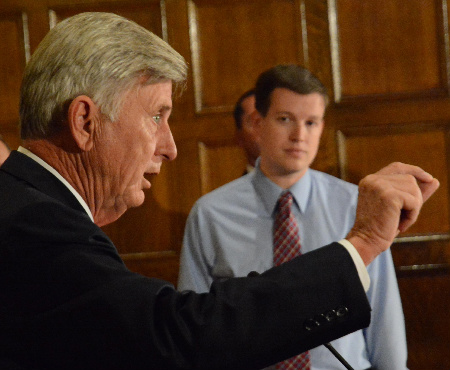 “I don’t remember when I found out that he was doing this,” said Beebe. “It would have been sometime when I was Attorney General. But I remember it didn’t surprise me.”

Beebe says DeCample has both a quick mind and high intelligence. It’s a rare combination that serves him well in all capacities of life.

DeCample began with the Little Rock comedy troupe in 2004 when he answered an ad on a theatre bulletin board. In 2005, the group of five guys and a musician began performing at the Weekend Theatre sporadically. When The Joint opened in Argenta, the group, which had evolved into three men and three women, became the Wednesday night staple.

“Improv is the therapy for the rest of my life,” said DeCample. “No matter what I am or am not on any given day, I can come here and make people laugh. I really believe laughter can save the world.”

Ihler believes the transition from day job to Improv improves both sides of DeCample’s life. “He can be the straight man and set up jokes all night long, or he can let go and be a guitar playing octopus, and bring the house down.”

Making people laugh is not new to DeCample. In the fourth grade, he was the last person on his bus to be dropped off every day after school. There was about 20 minutes each day when he and the bus driver were the only two left. She would hand him the microphone for the PA system and let him talk. He would pretend to be a tour bus operator, and do a running monologue of what was happening around them.

“It was just me and her, and she thought I was funny,” he said. “So I spent every afternoon trying to make her laugh harder than the day before.”

He says he can now look back and see how each step of his life trained him for the next thing, if he realized it or not at the time. When he got out of school, he wanted to be a sports broadcaster because he grew up in Seattle with a beloved sportsman: Dave Niehaus. He took a series of television jobs. At one, a guy in sales and the sports anchor did Improv and invited DeCample to join them, which is where he first learned his way around the craft.

Later he came to Little Rock as a reporter for KATV. In 2003, he was assigned to follow the legislature, where he became better acquainted with Beebe and his staff. It was after he began working for Beebe that he helped form Improv Little Rock.

“You have to be the right kind of damaged to do this,” said DeCample. “You have to be willing to fail and show your vulnerability. More than anything you have to honest.”

He quotes Oscar Wilde, “If you want to tell people the truth, make them laugh, otherwise they’ll kill you.”

Blunt honesty, above anything else, is the key to his success, on and off stage.

“He has a credibility with the press that is not questioned,” said Beebe. “They know when he tells them something, it’s the truth. He’s not afraid to say if he doesn’t know something and get back to them. He’s also not afraid to say he’s not going to answer them when it’s not appropriate to give all the information at that moment. In return, they don’t try to go around him or blow him off. That makes him effective at his job and the best person to represent an administration.”

Beebe, who says he is not personally very funny, saw DeCample on stage once. “It was fine. But I think the work he does here in the office every day to keep us all laughing, while remaining a calm and rational force in the conversation, is much better.” 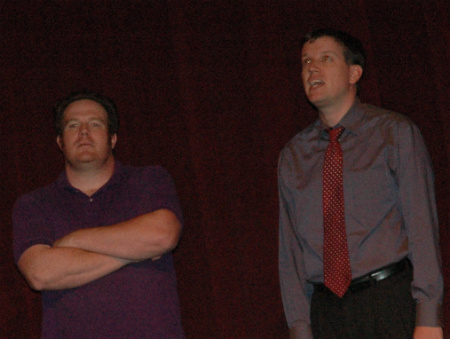