Another day in the U.S. Senate campaign means another day some blog or news website digs through Rep. Tom Cotton’s college writings.

You have to hand it to Cotton’s ability to turn some major copy back in the day.  Today’s installment comes from the left-leaning Slate blog and digs out a review Cotton wrote on a book by Stephan and Abigail Thernstrom called “America in Black and White.”

I have never read the book, published back in 1999, but according to the description on Amazon it “presents important new information about the positive changes that have been achieved and the measurable improvement in the lives of the majority of African-Americans.”

The book that Cotton is reviewing deals with the tricky subject of race relations in America, so it is no surprise that it is easy to lift out some portions to make it appear he is saying something controversial.  I don’t fault a left-leaning blog for such a tactic, but according to them it is not really even coming from Slate.  It is coming from the Pryor campaign itself.

(Disclosure: Sen. Mark Pryor’s campaign passed along the column, asking we not say it was from the Pryor campaign.)

This is quite an interesting note as Roller goes out of her way – at first before backtracking – to emphasize that it is not Slate but the Pryor campaign pushing out the column.  She goes on to highlight what she believes is the “most salient” part of the column, which is one passage where Cotton refers to Jesse Jackson and Al Sharpton as “race-hustling charlatans.”

Cotton goes on to write that the book he is reviewing holds that race relations would “almost certainly improve if we stopped emphasizing race in our public life.”

In full review, which Slate provides a picture of, it is clear that the column is 1) mainly a review of a book and 2) Cotton praises the work of Martin Luther King, Jr. and other leaders during the Civil Rights Era.

Roller goes on to sum up her take on the book…

There really isn’t anything in here you couldn’t hear on Fox and Friends, but it goes to show how much of an uber-conservative Cotton is. People who already support Cotton and read this may even grow to like him more.

So even a left-leaning blogger did not find this book review from Cotton’s college days to be a big deal, but I suppose went ahead and dutifully pushed the column anyway as the Pryor campaign suggested.

“My colleague forwarded a tip that was on background, and I mistakenly attributed it in the story,” said Roller after I asked her why she edited the story.  “I quickly realized my mistake and removed the reference, a professional courtesy I’d extend to any campaign.”

I have asked Roller how this could have been a mistake as she claims as her original post clearly stated that the Pryor campaign sent it to her, but asked her not to say that they did.  I also asked if the Pryor campaign asked her to edit the story after it was published.

She went on to add, “Next time, I’ll just dig through the college newspaper archives myself :)”

The news here really is that according to Slate’s original post the Pryor campaign did find these writings controversial.  So much that they tried to push the review in an effort to play up the race card.  You have to ask what they found so controversial.

I have asked the Pryor campaign about Slate’s claim and if they are trying to make race an issue.  Pryor’s campaign manager Jeff Weaver responded by saying, “I suggest probably contacting the reporters from Slate directly.”

I already had but still would like the Pryor campaign to clarify what exactly they found controversial in a college student’s book review. 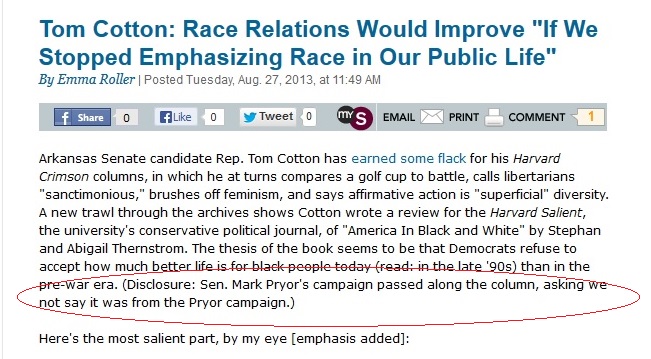