KATV’s Jason Peterson had an excellent report on Friday as part of his “7 on Your Side” series on the non-profit organization run by Republican gubernatorial candidate Curtis Coleman.

The report explains that although the Curtis Coleman Institute for Constitutional Policy claims on its website that in soliciting donations it is tax exempt, it has not yet heard back from the IRS on its application.  From KATV’s report…

Coleman’s attorney explains in an email that he filed for tax-exempt status “…on February 23, 2012.”  He says he has been told that “…the application is approved and that a formal determination letter will be forthcoming.”

He added that “Once that occurs, the form 1023 and all information submitted with the form become public documents.”

As an accountant, the report prompted several questions, so I followed up with Coleman’s attorney John Lessel who was kind enough to promptly get back with me via email on a weekend.  Lessel is also on the board of directors of the Institute.  He insists that the Institute is in compliance with IRS rules, but did admit that it failed to comply with a state regulation on charities.

Delay in Application Submission and Approval

As far as the delay in hearing back from the IRS, Lessel says that the IRS is “extremely backed up in the application process” and pointed me to information from the IRS website that shows agents are currently being assigned to applications received in March 2012.

The Institute applied for its application in February 2012; however, it began accepting donations as early as July 2010, twenty months before the application date.  Lessel holds that this is within IRS rules.

“As I am sure you are aware, the instructions to the Form 1023 specifically state as follows:  ‘If you file Form 1023 within 27 months after the end of the month in which you were legally formed, and we approve the application, the legal date of formation will be the effective date of your exempt status.’  Since the month of organization of the Institute was June 2010, the 27-month requirement was met,” said Lessel.

As for why there was a 20-month delay in applying, Lessel said,  “By having completed at least one fiscal year of 8 full months or more, which was not accomplished until October 1, 2011, the Institute could request a definitive ruling that the Institute is publicly supported and not have to rely upon an advance ruling.”

No Caution To Donors That Application is Pending

The donate page on the website stated the following going back to July 2010 – “The Curtis Coleman Institute for Constitutional Policy is a non-partisan non-profit corporation. Both personal and corporate contributions to The Institute are tax-deductible.”

No caution is given to donors on the website that the application is still pending with the IRS or during the period between 2010 and 2012 that an application had not yet been made.  Many non-profit organizations will include such a caution to donors as if the application is ultimately denied, then donors would be required to amend their personal income tax returns if they took a deduction for the donation which would then be disallowed and additional taxes, interest, and penalties may be owed.

Therefore – per the IRS – “contributors to the organization do not have advance assurance of deductibility.”

“The Institute has complied with all donor reporting requirements,” replied Lessel when asked about this.

In addition to IRS regulations,  charities are required to register with the Arkansas Attorney General’s Consumer Protection Division, which monitors the solicitation of donations as part of its consumer protection mission.  Lessel admits the Institute failed to this.

“The Institute is working with the Attorney General’s office to correct this unintentional oversight.  We anticipate full compliance shortly,” said Lessel.

In addition, the Institute sells a DVD series entitled “Origins of the Constitution“ on its website currently for $39.95; however, it does not collect and remit state sales tax.

“The Institute has been reporting the funds received for the DVD series as donations and has not been collecting sales tax on these transactions,” said Lessel.

Copies of the organization’s annual financial returns (see below) show that it reported $4,101 in “gross sales from inventories” less $32,930 in “cost of goods sold” for the three time periods reported since incorporation.

It is unclear if this includes the sale of the DVDs or some other product, but if it includes the DVDs, it would be inconsistent with Lessel’s answer.  And even if they are considered donations by the Institute, it is unclear if the Arkansas Department of Finance and Administration would view this the same way (See rule GR-39(C)).

IRS rules require tax exempt organizations to file an annual finance report (form 990) even during its application period.  These forms are public record and must be provided upon request.

The forms do reveal a bit about the organization, which listed its mission as “education of US Constitution.”  Most of the $145,570 in revenue came in the most recent annual period ended 9/30/12 when it raised over $153,000 through donations and dues.  This was offset in a nearly $29,000 loss from cost of goods sold greatly exceeding sales. The primary expenditure of the organization is roughly $147,160 in compensation for Curtis Coleman (See Update II below – Coleman defends this saying $124,918 was deferred and will be paid in future periods as cash is available.)

Another question regarding the Institute is the political nature of its activities and its ties to Coleman’s effort to build a grassroots organization and name recognition for his campaign for Governor.  Political activity is specifically prohibited for 501(c)(3) organizations.

Coleman stated in an email to supporters entitled “Decision Made“ sent in August 2011 that he decided he “should significantly expand the activities and public visibility (and hopefully the impact) of The Institute, and that I should plan to run for Governor in 2014.”

“The e-mail you selectively quoted went on to say, ‘The Institute and any future political campaign for office will be completely separate entities.’  This e-mail was not sent to individuals as Institute Directors, nor did it suggest any type of coordinated activity.  There has been no activities by the Institute that are prohibited under its 501(c)(3) purposes.  Mr. Coleman’s personal activities as a potential or declared candidate have been carefully kept separate from the activities of the Institute.  He remains as Chairman of the Institute, but that does not disqualify him from seeking public office,” responded Lessel.

More of this email can be read from a previous story here.

In addition, on the Institute’s form 990-EZ it answers ‘no’ to the question – “Did the organization engage, directly or indirectly, in political campaign activities on behalf of or in opposition to candidates for public office?”

Questions still remain for me, but my opinion is that the management of the non-profit organization by Coleman does not reflect kindly on his candidacy for Governor.

A reader sends along this billboard below paid for by the Institute. The website URL linked to is the Coleman for Governor campaign website.

UPDATE – The Attorney General’s office tells me that they have sent a letter to the Institute regarding their non-compliance.

“It is typical for us to send a letter to charities we believe may not be registered in order to make them aware of the law and give them the opportunity to send us information. We did so in this instance and we are awaiting a response from the charity,” said Aaron Sadler spokesperson for the office of Attorney General.

UPDATE II – Good follow up story from J.R. Davis with KNWA here who interviewed Coleman and asked him about some of these issues.  Two key points from Coleman –  he says the billboard was left up by error and the vender – Max Advertising – sent a letter apologizing for this.  On his salary, he defends it saying he was only paid $22,242 and has $124,918 in deferred compensation which will be paid as the cash comes in. 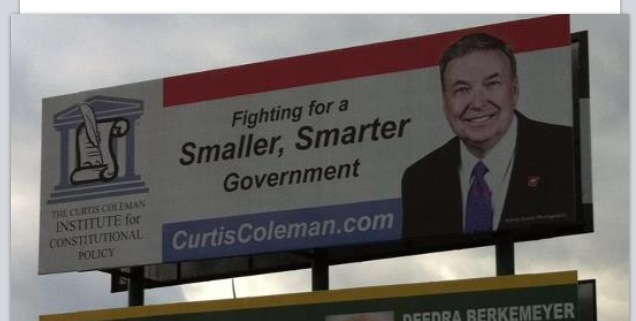