When Stephanie Streett was growing up in Russellville, politics was a part of her daily existence. Her father was the prosecuting attorney, her uncle served in the state Legislature, and her grandfather was a judge.

“I remember very fondly going with (my father) to the Johnson County Peach Festival and to the Mt. Nebo Chicken Fry and all those big events as a little girl,” Streett recalls. “And sometimes he’d let me stand up on the back of a flatbed and introduce him. So I was always interested in campaigning and elections. Again, it was just sort of something in my blood from the very beginning.”

Good thing, because politics also would be her livelihood. After working for President Clinton’s 1992 campaign, she moved to the White House, eventually becoming director of scheduling at the age of 30. Now she’s executive director of the Clinton Foundation. 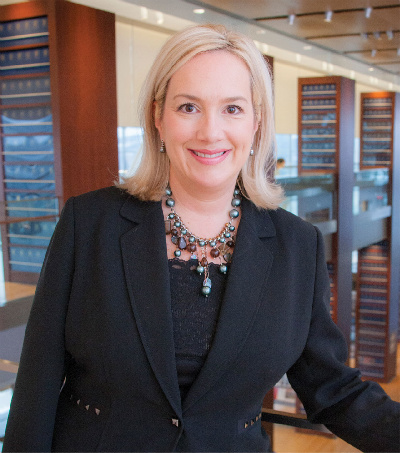 That White House assignment made her “the director of no,” she said. Many people wanted the president’s time, from high-ranking public officials to foreign dignitaries to members of the general public, and she had to balance the needs of those many constituencies with the president’s own. Deciding how Clinton would spend his days was a collaborative process involving many people, including Streett, the chief of staff, the legislative director, the first lady’s staff, and Clinton himself.

Mack McLarty, who served as counselor to the president at the time she became scheduling director, said Streett always carried herself gracefully and never became flustered. She took to the high-pressure job, he said, “like a natural athlete.”

“The Streett family is a political family in Arkansas,” he said. “She kind of came with that in her genes and DNA, and she grew up with it. That political good sense in her fingertips … was just evident, and she just was mature and wise beyond her years.”

The fast-paced life was good preparation for her current job at the Clinton Foundation, which has more than 1,300 staff members and volunteers in 50 countries. She oversees the foundation’s Little Rock operations and its budget of $4.5 million, staff of about 65 people, and more than 300 permanent volunteers. Longtime Clinton associate Bruce Lindsey heads the overall foundation as its CEO.

Streett’s job started less than two weeks after Clinton left office in January 2001. In the early days, her principle responsibility was organizing the foundation and planning what became the William J. Clinton Presidential Center – a job that required the ability to collaborate and, it turned out, a thick skin, two characteristics she had honed working in Washington.

A subject of almost forgotten controversy when it was being planned, the center has become one of Little Rock’s showpieces and attracts more than 300,000 visitors each year. The only federally maintained platinum LEED-certified building, it has been a catalyst for $2.5 billion in economic development and has revitalized a dilapidated part of Little Rock.

“There were critics along the way,” she said. “This was not an easy project. But I think if you look back and look at what this place is today, it’s hard to argue with the impact it’s had on our community.

The Clinton Center is maintained through a partnership between the Clinton Foundation and the National Archives and Streett has a role in its operations. The restaurant staff and catering service is her responsibility, and she helps plan the center’s numerous exhibits. In 2012, it displayed a copy of the Constitution’s 19th Amendment, which guaranteed women the right to vote, in conjunction with an exhibit on the president’s and first lady’s mothers, Virginia Kelley and Dorothy Rodham.

During 2013’s Independence Day celebrations, the center will display George Washington’s copy of the Constitution and the Bill of Rights. Popular non-political displays have included Elvis Presley and Lego exhibits. In 2011, the center finished the $10.5 million renovation of the Rock Island Bridge into a pedestrian walkway across the Arkansas River.

In addition to her work with the Clinton Center, Streett also works with the Clinton School of Public Service, which offers the nation’s first master of public service degree. That includes working with the school to bring in speakers as part of the Kumpuris Distinguished Lecture Series. A parade of dignitaries including Hillary Clinton, former Secretary of State Madeleine Albright, and, coming in February, former Vice President Al Gore have made their way to Little Rock.

The married mother of three also is involved in the array of causes important to the former president, such as the Clinton Global Initiative. The Clinton Center hosted an exhibit on Haiti that highlighted the work the initiative is doing there. She’s working with the Little Rock School District on the Healthy Schools Program organized by the Alliance for a Healthier Generation, a partnership between the Clinton Foundation and the American Heart Association. In 2012, she helped plan and host visiting delegations of ambassadors as well as the Club of Madrid, a group of 40 former heads of state.

Streett’s journey from the Johnson County Peach Festival to this point included an important stop as a student at the University of Arkansas, where she was active in the Young Democrats. She became campus coordinator for Michael Dukakis’ 1988 presidential campaign and worked with the advance team to organize a rally for vice presidential candidate Lloyd Bentsen.

That early introduction into national politics whetted her appetite for more. After a couple of years working in Washington for the Senate Budget Committee, she returned to Fayetteville to finish her degree at the same time Clinton was considering running for president.

Looking for something to do next, she traveled to Little Rock to meet with Lynda Dixon, Clinton’s personal secretary who also had worked as a secretary for Streett’s father for 12 years. Soon Streett became the campaign’s lead volunteer and then one of its earliest employees. She would help new staff members with mundane day-to-day tasks: finding apartments, driving them to and from the airport, picking up their dry-cleaning. She started working full-time as a campaign scheduler when Clinton officially announced his campaign.

After his election, she moved to the White House to work as deputy director of scheduling in the Old Executive Office Building before moving to the West Wing and becoming co-director and, in 1996, director. The hours were long, the pace was fast and the environment not as glamorous as that shown on television. “My office used to be a safe, to give you some perspective,” she said. “No windows.”

She worked in the scheduling office the entire eight years of Clinton’s presidency. It was an all-consuming job that required her to be at the office many days from 7 a.m. until 10 p.m. But she never lost her sense of wonder as she drove up to the White House and parked near her office. Now back in Arkansas, she cherishes the memory.

“It was one of those once in a lifetime opportunities,” she said. “I could have never predicted when I was in high school or when I was in Fayetteville meeting Sen. Bentsen, that four years later I would be in the White House directing the presidential scheduling operation, planning all the president’s foreign trips, domestic trips, daily White House schedules, state dinners, everything from soup to nuts. And it was obviously the greatest professional experience of my life.”