Dr. Todd Shields’ daughter, Savvy, competed in a series of beauty pageants during her youth culminating with her win as Miss Arkansas in 2016. She traveled the state and one place that stood out to her was Jonesboro, her father said.

Savvy validated her statewide win when she was named Miss America in 2017, and Shields told Talk Business & Politics that ever since he is fondly only known as “Savvy’s father.”

Shield’s now has another well-known title in Northeast Arkansas — chancellor at Arkansas State University’s Jonesboro campus. He previously served as the dean of the University of Arkansas’ Fulbright College of Arts and Sciences since 2014. He is slated to make $450,000 annually, ASU President Chuck Welch said when Shields was hired in July. Shields replaced former Chancellor Kelly Damphousse, who left to take the president’s job at Texas State University.

“The financials at Arkansas State University look really good,” he said. “We are in really good shape in that regard.”

A major surprise for him was that A-State’s enrollment in the fall of 2022 was up. Many schools had declines in enrollment, a trend expected to worsen as the decade progresses. The school had 14,109 students enrolled. It’s the first time A-State has passed the 14,000 level since the fall of 2018. Last fall, A-State reported 13,752 students.

“One of the reasons I tell people about why I came to Arkansas State is the community of people who are here on campus and in Northeast Arkansas,” Shields said. “I am very proud of the progress they made this year, and I’m looking ahead to continued improvement in years to come.”

After three years of enrollment decline, the upturn for fall 2022 is highlighted by growth in first-year students on campus, and an increase of more than 100 students living in campus housing. A-State also saw a 5% growth in the number of first-time international students, a 3% increase in students at Campus Queretaro in Mexico, and a more than 10% rise in online students.

The fall 2022 enrollment is the most in five years, and just 35 students short of the all-time mark of 14,144 in fall 2017. This year’s headcount now ranks as the second-highest enrollment at A-State history, exceeding the 14,085 in fall 2016 and 14,058 in fall 2018. Another indicator of enrollment turnaround was A-State having its second-best first-to-second year fall retention rate with 77.6%. 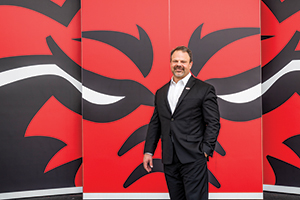 “More than once I’ve had someone tell me that the ‘campus seems busy again’ or ‘events are bigger,’ and it adds up to making A-State a great place to be,” Shields added. “I want this university to be the place where all Arkansans feel welcome, and I know our enrollment management team has a plan to take this improvement and continue to grow.”

Those in higher education know of the looming “cliff” when it comes to student enrollment. The Great Recession began in 2008, and one side-effect was people had fewer children for several years. This drop in population will begin to impact colleges and universities starting in 2025.

To combat this problem, Shields said a goal in his first year on the job will be to create a comprehensive plan to lure and retain students, and train them to work for companies and organizations in the region. Traditional models of higher education will have to change, he said. More “non-traditional” students will seek higher education opportunities. An emphasis for decades was to train students to get to graduate school, and that will change for many, he said.

Online programs continue to grow and that trend will expand in the coming years. Online classes take up less time and are easier to schedule for people who have jobs or family schedules to deal with, he said.

Employers will have trouble with staffing in the coming years, and part of the university’s strategic plan will be to offer degrees that help workers get jobs with local and regional companies.

“The big goal in the next five years is to create a strategic plan of how we are going to train students to be part of your workforce,” Shields recently told a group of NEA business leaders.

The new chancellor brought management experience to A-State. Shields’ academic administrative experience spans from department chair to research centers and from deanships of individual colleges to divisions touching all corners of the university. His two most recent academic appointments, dean of the Graduate School and International Education (GSIE) and dean of the Fulbright College of Arts and Sciences, are key parts of his background.

The Fulbright College is the largest college at UA, and includes some of the institution’s hallmark programs. Managing $80 million in general budget funds plus a research budget of approximately $18 million, Shields oversaw more than 650 full-time faculty and instructors and more than 700 teaching and research assistants as the Fulbright dean.

One of Shields’ contributions to UA was the creation of a School of Art within the college, bolstered by significant endowment gifts to fund construction of a new campus space that serves as a partnership with the city of Fayetteville. A $120 million gift from the Walton Family Charitable Support Foundation established the School of Art. That was followed by $70 million in support from the Windgate Foundation for the 154,600-square-foot Windgate Studio + Design Center to anchor a new art district redevelopment south of the campus core on Dr. Martin Luther King Jr. Boulevard. He also was part of an effort to secure $90 million in software and equipment gifts to programs in the Fulbright College.

Shields was involved in the creation of the Diane D. Blair Center of Southern Politics and Society, serving as the founding director of the interdisciplinary research center. Building upon his previous experience as the associate director of the Fulbright Institute of International Relations, the Blair Center became an established resource for programing, curriculum, research and polling for the state and region. Shields followed his time as department chair and Blair Center director with a year as the associate dean of the President William Jefferson Clinton School of Public Service in Little Rock.

Concurrent with his time at the Clinton School, Shields was first appointed interim dean in 2010-11, then permanent dean of GSIE the following academic year. Along with the graduate school, he also supervised international students and study abroad and sponsored programs on the UA campus.

He is the co-author of three books related to electoral politics. Shields and Angie Maxwell combined for the 2019 “The Long Southern Strategy: How Chasing White Voters in the South Changed American Politics.” His 2008 book with Sunshine Hillygus titled “The Persuadable Voter: Wedge Issues in Presidential Campaigns,” won the 2009 Robert E. Lane Award for the best book in political psychology. His first book, “Money Matters: Campaign Finance Reform and Congressional Elections,” was written with Robert Goidel and Don Gross.

He was also an editor on six other books, published more than 40 articles and made more than 50 presentations in his research area of voters and election strategies.