Lucas Kemper, Baxter Conley and Melissa Maltarich converged in downtown Bentonville amid the global COVID-19 pandemic to launch a new line of men’s hair care products created out of a barbershop owned by Kemper and Conley.

Dandymen hit shelves in more than 700 Walmart stores in 49 states in August. The boutique-quality hair care products were the brainchild of Kemper, who was on a mission to open a barbershop and launch a men’s haircare line of products that retailers could sell at affordable prices.

As a barber and educator, while living in Missouri, Kemper said he became interested in the market gaps for higher-quality haircare products for men at mass retail. He said boutique-quality products sold at more than twice what a mass retailer could do given higher sales volume.

Conley, an information tech salesman from Dallas, met Kemper a few years ago at a local barbershop he was using. Conley moved his family to Bentonville from Dallas in 2017 after traveling back and forth for many years, calling on the retail giant for IT sales.

“When I met Lucas, I was impressed with his vision and what he hoped to accomplish at his young age,” Conley said. “We began to talk, and I wanted to mentor and invest in his plans as I was looking for something new to do myself.”

Kemper, 30, said the conversations began in January 2020 as much of the world was shutting down for COVID. Conley said much of the early-stage planning was already in place, and Kemper needed help with execution.

The partners set out to find a manufacturer who could make boutique-quality hair products that eliminated water-resistant chemicals that tend to build up on the scalp and clog follicles. He said the products provide an excellent hold and thoroughly wash out of the hair with little effort. Kemper said better-for-your-scalp products for men were then not available at mass retailers.

“Women have a wide range of higher-quality hair care products sold at mass retail. But that was not the case for men, and that’s the market Dandymen is targeting,” Kemper said.

Kemper first worked with Ruger, a haircare brand in the United Kingdom, but then sought to look for a U.S.-based manufacturer to reduce shipping lead times amid the supply chain issues the world dealt with during the pandemic and since.

The partners settled on a manufacturer in Carson, Calif., which gave them a U.S.-made label. In 2020, Kemper and Conley also brought in Maltarich, owner of Be Bold Advertising, as a partner in the Dandymen branded products they hoped to sell into Walmart.

Conley said he managed business strategy and execution planning, while Kemper focused on product quality, manufacturing and distribution. Maltarich worked to co-create the brand and work on product marketing and packaging. The three partners co-own the Dandymen brand and said they had invested around $400,000 to bootstrap the entire venture. The business partners also handle ordering the raw materials used to make the product, from hair care ingredients to labels and packing materials. 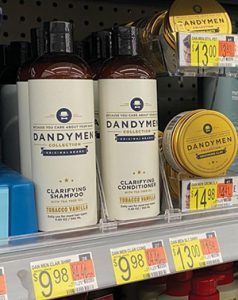 Kemper said Dandymen works with a logistics partner to ship the product to Walmart on a prepaid basis. He said the first shipment made it to all the distribution centers serving the 732 stores where the products landed on time and in full.

“We are happy with the sales recorded in the first month Dandymen has been sold in Walmart. The products are also sold on Walmart.com,” Kemper said.

The company has no plans to sell Dandymen on Amazon or at any other mass retailer because Walmart signed a one-year exclusive deal, Maltarich said. She said that with a staff of three who each also have other jobs, Walmart’s account was plenty to start. However, Kemper continues to look for product expansion opportunities for Dandymen in mass retail.

Kemper’s vision also included his own barbershop, and Conley helped him pull that off during the pandemic. The two partners opened Illume Barber Shop just off the Bentonville Square in March 2020. Located at 100 S.W. Second St., the barbershop has eight chairs and a customer list that includes several Walmart buyers and other execs at the retail giant.

Dandymen products are sold inside the Illume Barber Shop. While Conley called on Walmart for about a decade and had some contacts, the barbershop in downtown Bentonville helped introduce the Dandymen brand to the right people. Kemper said talking with customers about the products and wanting to offer them at mass retail for a more affordable price resonated with one customer who worked for the Hatchery Group, a brokerage firm in Bentonville that represents companies hoping to their products into retail stores. He said that connection helped to get them a meeting down the street at Walmart’s corporate headquarters with the buyer team for men’s hair care and grooming. The first meeting with Walmart occurred in the first week of February.

Conley said the buyers liked that Dandymen filled an untapped market inside mass retail stores for boutique-quality men’s hair care products. The partners said the next few months were a whirlwind of activity. It took them just 25 weeks to go from the initial meeting at Walmart to the Dandymen products reaching retail shelves. After an initial deal is made, it can take up to one year for products to get into stores.

“When I first saw Dandymen on the Walmart shelf, it was surreal. Sometimes we still can’t believe it happened so quickly,” Maltarich said.

Dandymen has four products in stores and five online at Walmart.com. The products range from grooming clay at $13 to styling paste and texturizing sea salt spray, which each sells for $14.98. The premium shampoo and conditioner sell for $9.98 each. Kemper said the Walmart products are priced between 25% and 28% value to boutique prices for the same products.

While Dandymen is seen as a premium hair care product line for men, Kemper said the products are unisex. He said the product launch got into stores when inflation pushed consumers to watch expenditures more closely.

The partners also said birthing a brand during the pandemic was what they wanted to do because they were each bored from the shutdown. From the first conversations between Conley and Kemper in January 2020 to the day the products landed on Walmart shelves in August 2022, Kemper said it’s an amazing journey, and Dandymen is just getting started.