One of Bentonville’s best-kept business success stories is celebrating its 45th birthday in 2022. Its new president says the milestone is an opportunity to regain momentum following the pandemic and position for a promising future.

“There is so much runway and growth potential here,” said Outdoor Cap Co. President Jeanelle Harris. “Though we do feel like we’re just getting started. We’re getting ourselves back in gear.”

From small beginnings in 1977, the privately owned business is now one of the country’s largest headwear suppliers with over 14,000 business customers across multiple distribution channels in the team sports (MLB and MiLB), promotional products, hunting/fishing and retail.

“Anything from the neck up,” Harris said.

Outdoor Cap maintains large distribution centers in Bentonville, Texas and California to satisfy the broad customer base, and Outdoor Cap is licensed to sell and distribute headwear for over 100 organizations. That number is growing, and the company also developed several of its own market-specific brands.

Although Harris did not disclose the company’s revenue, she said the retail segment had produced double-digit year-over-year growth in the past three years.

“We are attacking business differently than we have in the past,” she said.

Outdoor Cap’s employment and community impact in Bentonville is equally as significant. The business has grown to more than 400 employees in Northwest Arkansas, many long-tenured. It takes seriously its responsibility to be a good corporate citizen by supporting dozens of nonprofits in various ways throughout the region.

“In many ways, Outdoor Cap’s business model represents the best of both worlds,” said Ashley Wardlow, the interim CEO of the Greater Bentonville Area Chamber of Commerce. “While they offer apparel product development and design on par with what you’d find in larger metros, they’ve built a team culture that’s community-focused and welcoming.”

Harris said the community-focused culture is how “Mr. Mahan” has always run the company. Mr. Mahan is the company’s founder and chairman, Paul Mahan. He is the unpretentious and low-profile owner who prefers to let his company executives and employees be the face of the business.

“He has a business aptitude that is unmatched,” Harris said. “But the most impactful or memorable lessons have been more on the caring side. He cares about his people. He cares about the health of the business, but he wants to do things with integrity and respect. He wants to ensure we are equally focused, which is one of the reasons I wanted to come and work for him and why I am enjoying it.”

THE PATH TO PRESIDENT
Outdoor Cap named Harris its first female president in January this year. A Gravette native, she graduated from the University of Arkansas in 2005. She began a career in the region’s consumer packaged goods (CPG) industry with California-based consumer products supplier Olivet International.

Harris said she was one of two initial employees at Olivet’s Northwest Arkansas office, established to support its significant client — Walmart Inc.

“We did the luggage business, and over the next 15 years, we grew to 16 different categories,” Harris recalled.

Harris wasn’t pursuing another job when Outdoor Cap recruited her in 2019 for a leadership role in its retail sales division.

“Even being a local, I didn’t know much about Outdoor Cap,” she said. “After researching and meeting the leadership team here, it felt like a good segue to do something different in my career.”

The opportunity nearly did not materialize, but for the company’s reluctance at the initial candidate pool.

“The recruiters only had men in the [job candidate] pool, and the leadership team asked, ‘Where are the women?’ Because that was important,” she explained. “They sent them back. Being a woman in business, that was important to me — to know they wouldn’t be satisfied without an inclusive, well-rounded pool of job candidates.”

Harris’ impact on the business made her a logical choice as his successor.

She joined Outdoor Cap as senior vice president of retail sales, then promoted to chief sales officer in 2021. Her responsibilities included restructuring the sales, supply chain, and customer success departments to increase sales, encourage collaboration, and focus on the customer experience.

“I have always believed that we are interviewing for our next job every day as we go about our work, and Jeanelle has excelled as a leader who gets things done,” Mahan said. “We always strive to promote from within. Jeanelle has proven herself as a thoughtful, strategic and empathetic leader who deeply understands our people, business, customers and culture.

“Outdoor Cap requires new thinking and a deeply committed leader to help us achieve our next level of success. Jeanelle is the right person to lead us into the future.”

Harris said the weight of her new responsibility is not lost on her.

“As you step into that [leadership] role, your care for people has to increase,” she said. “That’s probably been the biggest [change] is from the people side and the transition. Not as much the business side because we’ve got great people who are taking care of that no matter who is sitting in the corner office.”

THE EARLY YEARS
Paul Mahan showed the makings of a successful entrepreneur while attending the University of Arkansas. Born in Conway, he and his family moved to Fayetteville in 1960.

“My dad worked for the Forest Service,” he recalled. “He wanted to move to Fayetteville, so his three boys would have a chance to attend college.”

During his first year of college, Mahan had a summer job selling fireworks. It was profitable, and he enjoyed the business so much that by the time he graduated in 1976, he owned about 25 fireworks stands in Arkansas, Oklahoma and Missouri.

“So instead of using my zoology degree and going to veterinary school, I decided to get a job that I could work around the fireworks business,” Mahan said.

He started working as a manufacturer’s rep for Trophy Sportswear, a screen printer in Fort Smith. Some customers began asking Mahan for caps with patches on them. Trophy focused on screen printing and didn’t want to do that.

With that, Outdoor Cap was born in Mahan’s garage.

“I bought a cap iron, outsourced the patches and started buying caps from a U.S. distributor and applying the patches to the caps,” he said. “The company grew beyond my wildest dreams. I thank the Lord every day that He has blessed us so richly to have a highly successful business to impact so many lives in Northwest Arkansas.”

Mahan said one of the company’s big breaks early on was a business connection that helped Outdoor Cap begin sourcing directly from Asia.

“Once we could buy direct from the factory, our business really began to grow,” he said.

Outdoor Cap’s main business in the early years was promotional products. The company broke into the retail market by getting a license from Zebco and some other fishing tackle manufacturers, doing caps with their brand and selling them to Walmart in the early 1980s.

“We grew enough to build our first warehouse in Bentonville in 1984,” Mahan said. “In 1989, we opened a factory in Miami, Okla., — primarily to build caps for the Walmart’ Buy America’ program. Then in 1994, we were able to buy a company with an MLB license and start supplying Major League Baseball caps to retailers and Little Leagues all over the country.”

In 1994, Outdoor Cap opened a distribution center in Dallas to support the robust promotional products business in Texas. A warehouse in Ontario, Calif., came online in 2001 to service the West Coast market and be a cross-docking facility for products arriving from Asia.

Outdoor Cap has scaled through acquisition in recent years. Kourtney and Beau Barrett launched apparel and manufacturing company Junk Brands in 2011 in Bentonville, then sold the business to Outdoor Cap Co. in 2015.

“At the time, they were mainly focused on the Crossfit market but have since expanded into brand and sports licensing including MLB and NFL,” Mahan said. “Junk headbands are designed and manufactured right here in Bentonville.” 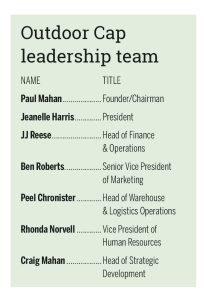 In 2019, Outdoor Cap acquired California-based Legendary Headwear. Legendary is based in San Diego with manufacturing facilities in Tijuana, Mexico.

“We saw an opportunity to purchase an iconic brand in the golf market while expanding our manufacturing capabilities in North America,” Mahan said.

PLANNING FOR THE FUTURE
Mahan said Outdoor Cap has gone through many transitions in its history. What hasn’t changed is that the customer is still the boss.

“We have always been a customer-centric company, and we believe in creating a great customer experience each and every time someone chooses us to take care of their headwear needs,” Mahan said. “We are now building the next level of service, product and innovation to help us be a leader in the markets we serve. We want to be the preferred business-to-business headwear partner across retail, golf, team sports and promotional products.”

Outdoor Cap’s latest transition is focused on digital transformation and enhanced customer expectations to drive the future of the business.

But, that vision always starts with employees.

“We strive to create a vibrant work environment where we can work hard, have fun, grow and create opportunities for our many associates,” Mahan said. “The people of Outdoor Cap have made this company what it is today, and they are also key to our future success.”

One of those people is Mahan’s son. Craig Mahan earned an MBA from the University of Arkansas and worked for an accounting firm for three years before working for Outdoor Cap. Living in California, he was in charge of West Coast sales for a few years and then started helping with the factory in Mexico and various other projects that arose during the pandemic. He recently relocated back to Bentonville and is working on key strategic initiatives to help position the business for the future.

“He is talented and intelligent and has worked his way up here to be able to sit where he is in terms of strategic development,” Harris said. “I am excited that he is back in Bentonville.”

Paul Mahan said his son has been around the business since he was a child and has met many of the company’s suppliers and business partners.

“Being back in Bentonville will allow him to learn all facets of the business and help us figure out how to adapt our business to a fast-changing world and market,” he said.

As for the founder, Mahan still enjoys working but is fortunate to have a strong and committed leadership team that allows him to step back from the business little by little.

“I love the outdoors and traveling and spending time with family and friends,” he said. “I do like to stay connected to the business, our leadership and all the great people at Outdoor Cap who have made this company what it is today. I get energy from our people and seeing the business change, adapt and succeed.”