For now it’s a no-go on an Interstate 49 interchange at U.S. 64 in Alma as part of the interstate’s almost 14-mile extension south toward Barling. While area residents are happy about the extension, some, like former Rep. Ed Thicksten, are pushing for the interchange.

More than 150 people gathered Thursday afternoon in the Alma First Baptist Church family life center for a “listen only” session held by the Arkansas Department of Transportation (ARDOT) about the interstate extension on which construction of the first phase could begin later this year. Several ARDOT employees, with several maps and video presentations, were at the session to answer questions.

With funding from voter-approved Issue 1, ARDOT has dedicated $270 million for the I-40/I-49 interchange at Alma to Highway 22 13.7-mile project that includes a two-lane bridge over the Arkansas River, and another $270 million for the south part of the interstate from Greenwood to Y City. The Y City connection would take I-49 to the Highway 270 route east to Hot Springs.

Arkansas Highway Commissioner Keith Gibson, who lives in the Fort Smith metro, has said the cost to complete 136 miles of I-49 from Fort Smith to the Texas state line is $4.1 billion. There is no funding for that work or a timeline. The nearly 20-mile Bella Vista Bypass, or Missouri-Arkansas Connector, consisted of six projects totaling more than $220 million beginning in February 2011. The completion of the project links 265 miles of interstate from Fort Smith to Kansas City, Mo.

The 13.7 mile section presented Thursday will cost around $710 million, according to ARDOT Spokesman Dave Parker. Of that, about $260 million is for the bridge that will cross the Arkansas River east of Trimble Lock & Dam and the U.S. 59 bridge. Completion of the section is estimated by ARDOT to be near the end of the decade.

“There are no plans to build an interchange at 64,” Parker told Talk Business & Politics. “It’s too close to the I-40 interchange. There’s not enough room there basically to build that full interchange. That’s why it’s not part of it.”

Thicksten, who represented the Alma area in the Arkansas House of Representatives for 23 years and carried legislation in the early 1990s that matched federal dollars for the construction of I-49 between Alma and Fayetteville, said he and others were at the session to push for the 64 interchange. 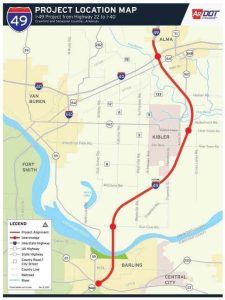 “That’s what we’re trying to do, to make them understand that it’s not fair to leave Alma out of I-49. It’s just not fair. In my legislative career I was one of the ones who pushed it (I-49) so very hard. … And I feel like it’s my baby, and I don’t want see my baby go down the road,” Thicksten said.

He admitted that the interchange will be close to the planned I-40/I-49 interchange expansion, and that building an interchange on the unstable ground in that area will be expensive, but said it’s doable.

“You know, they build interchanges like that (near other interchanges) all over the country. … So it’s not anything that can’t be done,” he said.

Thicksten said business and political leaders in the area have been and will continue to push for the interchange.

Parker said ARDOT will conduct another session “sometime” in the summer with more detailed plans and timelines.