Editor’s note: The author of this article is a regular columnist for the Arkansas Democrat-Gazette. Link here to connect to the State of the State section.

On Monday, Jan. 10, a microcosm of Arkansas politics for 2022 appeared from the hills.

Bob Largent, a retired Air Force colonel who is president of the Harrison Chamber of Commerce – which is approximately the most establishment-conservative identifier imaginable, combining a military career with civic and business promotion in a small hill town – announced he would run in the state Senate Republican primary in the district now represented by Bob Ballinger.

Largent said it was time for “collaborative” conservative representation in Little Rock. He spoke of a need for teamwork. He was surely implying that Ballinger – a conservative, for sure – had not represented the area in a collaborative, team-working way.

You would find agreement on that in the Republican governor’s office and in the Republican legislative caucus. Ballinger – and his main sidekick Trent Garner of El Dorado, who is leaving the Senate – have been widely credited, or blamed, with forcing a combative, resentment-based and destructive culture in the Senate. More pragmatically inclined conservative Republican senators have felt obliged to go along with them for fear of losing primaries to challengers calling them the worst thing, meaning … not liberal, but, even worse, tolerant of liberals and unwedded to the in-your-face style of Trumpism.

That kind of thing was what yesterday’s version of an extreme conservative, Jim Hendren, was talking about months ago when he left the Republican Party. He, moderate now by rightward redefinition, eventually chose not to run again. He formed Common Ground Arkansas to seek pragmatic problem-solving in the Senate rather than what he saw as destructive grandstanding.

What Common Ground said it stood for was precisely what seemed to be emerging as an alternative in Harrison. 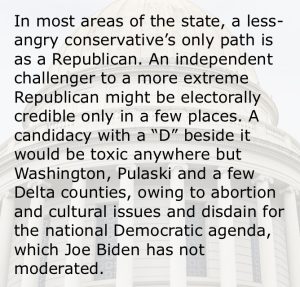 In most areas of the state, a less-angry conservative’s only path is as a Republican. An independent challenger to a more extreme Republican might be electorally credible only in a few places. A candidacy with a “D” beside it would be toxic anywhere but Washington, Pulaski and a few Delta counties, owing to abortion and cultural issues and disdain for the national Democratic agenda, which Joe Biden has not moderated.

Arkansas Democrats are reduced to a smattering of legislative seats from Little Rock, Fayetteville and a couple of strips of the Delta. Statewide, they appear to be locked in at 32% to 38%.

As the theory goes, the Senate – and perhaps the full General Assembly – will be improved by just a few choice exits and replacements, remade into a place entirely conservative, of course, but with fewer bulls crashing the china.

Arkansas Democrats never would have thought, and won’t now quite publicly admit, that, in 2022, their great political interest would be Republican state legislative primaries.

State Sen. Clarke Tucker, D-Little Rock, comes close, saying, “Just as important as how many Republicans there are is who those Republicans are, and which ones are setting the tone and the agenda. With Senators Garner and Rapert [Jason, running for lieutenant governor] both moving on, not to mention some other members who are powerful and not coming back, the personality of the Senate could be quite different.”

Grant Tennille, the former head of economic development for Mike Beebe and now the brave soul taking the daunting job of the state Democratic chairmanship, insists, of course, that Democrats aren’t irrelevant. But he admits he “knew this bed was on fire when I laid down in it.” He outlines his party’s incremental first goal as cutting by at least five seats into the Republicans 79-21 legislative advantage. He wants as a first step for the Republican advantage to be south of 75-25.

Most predictions go the other way.

Tennille says Democrats ought to be able to achieve a legislative representation close to the 37% that Joe Biden got in the presidential race. One factor, though, is that Democrats tend to win widely when they win, in Little Rock and Fayetteville mostly. They use up a lot of that 37 percent in handsome legislative margins in a few seats. Even so, Tennille says he is not buying that Democrats “ought to just wait around hoping that the Republicans will become nicer people.”

For one thing, he says, there’s no “discernible difference” in the voting records of “strident Republicans and what you might call more moderate Republicans.”

Common Ground Arkansas and some in state government say there is a big difference because the strident ones force votes on issues that moderates would not press. For example: Regular Republican legislators agree with the strident ones that the people of Arkansas shouldn’t be mandated by government to get vaccinated or wear masks. But that doesn’t mean they want an openly combative law removing the governor’s authority to use that tool no matter the crisis. Forced to vote by the insistence of the strident ones, though, the regular Republican legislators think they can’t risk being labeled enemies of personal freedom.

The theory is that removing a few right-wing agenda-setters would change the tone and culture entirely.

“Maybe so,” says Tennille of the theory, “but that’s a pretty thin reed for me to stand on.”

So, he says, Democrats need to go deep to the ground level, door to door, to see the people and address real needs, explaining that – in the face of these needs, not to mention a pandemic – “the Republican Legislature decided its priority was to cut taxes for rich people.”

He says Arkansas is “not a red state and not a blue state; it’s a non-voting state.” That’s a standard modern Democratic refrain – that they’ll win when everyone starts voting. Mike Ross would have been elected governor in 2014 if the first Democratic assertions of long-untapped but newly emerging votes had been so.

But Democrats have to find hope, and Tennille finds it there. And the state’s liberal matriarch, term-limited Sen. Joyce Elliott, is there with him. She says the idea that the state is, from the Democratic perspective, hopelessly gone-red and that the best to be hoped for is a less-conservative conservative “is a conventional wisdom in which I don’t have the privilege of indulging. As a person of color and as woman, I can’t concede to that.”

She, too, says there are 400,000 people out there not registered to vote and you can’t reach them if you’ve given up.

Gov. Asa Hutchinson, embarking on his eighth and final year as governor and third with the challenges of an epidemic, takes a few seconds—as is sometimes his wont—when asked if he agrees that the essence of political competition in Arkansas in 2022 will be Republican primaries pitting regular conservatives of his sort against fierier ones of the Garner-Ballinger-Rapert sort. He finally ventures to answer, “I’d say that’s an element, yes.”

Asked for his assessment of how he came in the last couple of years to be at such odds with a Legislature of his own party—and how this internal Republican battleground came to be—Hutchinson hastens to argue things are better now. He says there is wide conservative agreement on his agenda for 2022—improving workforce training, emphasizing infrastructure with the new federal money including broadband expansion, and generally preparing Arkansas to compete better in the new economy.

Indeed, none of that is as divisive as a mask mandate or a gun-sovereignty law or a hate-crimes bill or unilateral executive powers exercised due to an emergency.

But, as to how his bad legislative relations came to be within his own party, Hutchinson explains this way: “Historically, and going back to my days in Congress, conservatism has meant restraint in government – that government doesn’t need to address every problem. And that’s the kind of conservatism I’ve practiced and believe in. But today there is a new brand that doesn’t believe in restraint in government. It sees a problem and says, ‘We’ve got to address that with a law.’ And I’ve consistently held the position that we shouldn’t always do that.”

For probably the best example: The new-brand conservative legislators, offended by the governor’s ordering a statewide mask mandate as an infringement on individual liberty, insisted on a law that effectively put state government in the big centralized role of telling local school boards that they were forbidden from exercising local discretion. And the law got overturned in Pulaski circuit court as a violation of the separation of powers constitutional principle delineating and reserving executive and legislative powers. 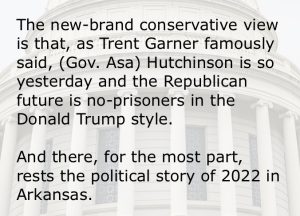 Over the years, Hutchinson has differed with such extreme-conservative legislative priorities as enacting gender laws for bathrooms, forbidding state law enforcement officers from working with federal agencies to enforce federal gun laws and copying a Texas anti-abortion scheme that is tied up in federal court even as a more basic anti-abortion law is pending before the U.S. Supreme Court.

The rhetorical difference attending that debate goes as follows:

• Hutchinson’s pragmatic view, probably more widely shared among Republican legislators than is evident, is that of course he doesn’t want biological males in girls’ bathrooms, or gun control, or abortion, but that these new-brand conservative fixes presume to address problems that don’t exist or address them in ways that are ineffective, counterproductive or, in fact, non-conservative – hamstringing police investigations or locking bathroom doors to people not in them.

• The new-brand conservative view is that, as Trent Garner famously said, Hutchinson is so yesterday and the Republican future is no-prisoners in the Donald Trump style.

And there, for the most part, rests the political story of 2022 in Arkansas.

“Well,” he says, “I didn’t endorse anyone when there was a competitive primary. But with others dropping out, it became obvious that Sarah had won and proven herself to be the choice of Arkansans.”

“She’s a good conservative Republican. She speaks and communicates well,” he says. “And, in terms of the agenda I’ve outlined for this year, she’s fully in line with it and is already out there talking about advancing those principles.”

So, the story of 2022 seems to be transitional. It’s deciding between restrained conservatism and the new-brand’s fiery activism. Its role is to set the table for what Sanders will have in store beginning in 2023.