Bitten by the entrepreneur bug, Caitie Gehlhausen of Indianapolis always wanted to run her own company. She wasn’t sure what that would be or where the journey would take her. In 2017, Gehlhausen left for High Point University in North Carolina on a golf scholarship. During her second semester, she took an entrepreneur class and declared that her major.

Soon after, she began looking for a phone gadget to hold her student ID, credit cards and also support a phone grip.

“I began looking on Google for one product that accomplished both goals: holding my cards and supporting a grip,” she recalled. “There was nothing available. That’s when it hit me to try and come up with a solution.”

She came up with the design, applied for and received a utility patent, and began looking for a plastic manufacturer. Because she planned to return to Indiana after graduation, Gehlhausen looked close to central Indiana. With the help of her mom and business partner, Carrie Gehlhausen, she found Progressive Plastics in Elwood, Ind., which is about 25 miles from her home.

“We met with Progressive Plastics, and they were so nice to me, even though I just needed to start with a small run of 500 items,” Caitie Gehlhausen said. “They provided great service and treated me with respect long before I had proof of market demand.”

In 2019, Gehlhausen launched Socket Lock-It and began making promotional sales with businesses looking to spend advertising budgets on phone gadgets for giveaways. She also began selling the patented phone gadget on her website and outfitting her friends and their friends and family.

After graduating early from college, Gehlhausen returned to Indianapolis and decided to pitch to Walmart during the 2020 virtual Open Call held in October. That was her first time to pitch into big retail, but Gehlhausen said she took a shot given she had nothing to lose.

“I was blessed with pitching the Socket Lock-It to Johnny Merrill, a merchant director at Walmart,” she said. “He loved the product and gave us an immediate ‘yes’ at Open Call, and he put us in nearly 2,000 stores. From there, it’s been a whirlwind.”

Up to that point, Gehlhausen said she and her family had bootstrapped the business, but it was going to take substantially more capital to fulfill Walmart’s big order.

“We took our purchase order to our local bank and got a small-business loan that helped us fund the manufacturing, packaging and shipping costs to service Walmart. So far, so good,” she said.

Because Gehlhausen needed to ship to multiple fulfillment and distribution centers in Walmart’s supply chain network, she also enlisted the help of third-party logistics provider and co-packer MSL COPACK + ECOMM in Indianapolis. MSL does the packing and case counts and ships to Walmart on behalf of Socket Lock-it. 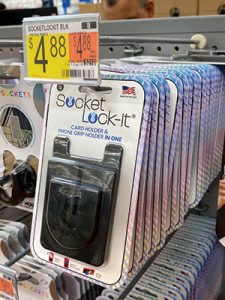 “My manufacturer got me in touch with MSL,” she said. “Our first big shipment to Walmart that included the items in shelf-ready cases was sent and received in full and on time. We learned all about the importance of that. It got into stores in April, and sales are going well.”

Merrill put the items in just under 2,000 stores, and during the recent Open Call opening session, Merrill touted Socket Lock-it as one of his favorite items to get into stores from the previous year. He said at $4.88, the item is priced so just about everyone can afford it. Gehlhausen said that because of the large shipment and manufacturing run, she could lower her raw materials’ cost and pass the savings on to Walmart. Socket Lock-It sells for about $1 higher on Amazon.com and the company’s website.

“Walmart ordered two different colors of the Socket Lock-it for stores,” she said. “They chose black and aqua. The items are sold in the electronics department near the phone cases and other phone gadgets. It was so surreal to walk in a Walmart store and see a product you dreamed up actually sitting on the shelf. Sometimes I still can’t believe it.”

When she stops to think about what her startup accomplished amid the pandemic, Gehlhausen said she can hardly believe it.

“My mom has been a huge help, and our manufacturer and co-packer treated us like pros,” she said. “I am so glad they were located near our home base in Indianapolis as the pandemic worsened in 2020. It could have been hard to pull off if they had been out-of-state or out of the country.”

Gehlhausen said she knew she wanted to have the products made in the U.S., and Socket Lock-it is just the beginning. She dreams of bringing other products to market, items that help solve problems or make consumers’ lives a little easier.

“My dad owns his own business, and I always knew I wanted to do the same,” she said. “I have lots of ideas for other products, and getting into Walmart with my first idea has been huge. The buyer team and everyone at Walmart has been great as there is so much to learn about selling big-box box retail. We are just now able to take our first trip to Bentonville to meet Johnny and the buyer team in person.”

The biggest lesson Gehlhausen learned in the past 10 months since getting her “yes” from Walmart is that she didn’t take enough supply chain and logistics classes while in college.

“Also, I will say the importance of relationships when starting and growing a business is huge,” she said. “I have learned that it takes a village to make it work. From my lender to Walmart, my manufacturer and co-packer shipper and packaging firm, building relationships has been key to the success of pulling off the first order in near-record time.”

Walmart has said it generally takes an entire year or more to get products on store shelves, especially if there is no proven market data for the item.

Merrill said Socket Lock-it was fast-tracked because Walmart wanted to be the first retailer to offer it at scale. She said the deal with Walmart was made official in early November 2020 after getting the “yes” at Open Call the month prior. The product had to be delivered into Walmart’s supply chain in February and out in stores by April.

“That was insanely fast, and it did take a village to pull it off,” she said.