Arkansas is ready to change its sculptures in the National Statuary Hall Collection in the U.S. Capitol, and sculptors have been selected. The two statues in the Hall, those of U.M. Rose and James P. Clarke, will be replaced with civil rights icon Daisy Gatson Bates and hall-of-fame musician Johnny Cash.

Thurston reviewed and accepted the committee’s recommendations and will begin contractual negotiations with the selected respondents, he said. A timetable for completing the statues was not released. More than $500,000 was raised for the statue work, Gov. Asa Hutchinson said in November.

Cash will be the first musician in the Hall. His statue will be placed in the Hall Visitor Center, National Statuary Hall Steering Committee Chairman Shane Broadway said. Bates will be placed next to a statue of Confederate President Jefferson Davis and adjacent to another civil rights icon Rosa Parks. The committee has worked for about a year with the families and officials with the Hall to place and construct the statues. 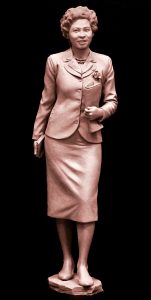 Bates is considered a pillar in the Arkansas civil rights movement. She, along with her husband, Lucious Christopher (L.C.) Bates, started the weekly newspaper, the Arkansas State Press, in 1941. It would become the largest African-American newspaper in the state and focused on journalism related issues. It had a statewide reach, distributing in cities such as Little Rock, Pine Bluff, Texarkana, Helena, Forrest City, and Jonesboro.

The U.S. Congress authorized the creation of the Hall in 1864 and each state is allowed two statues. Up to 5 million people from around the world visit the Hall each year.

U.M Rose (1834-1913) was an attorney who founded the Arkansas Bar Association and Rose Law Firm. He was appointed to serve as an ambassador during the Second Hague Peace Conference in 1907 by then President Theodore Roosevelt. James P. Clarke (1854-1916) was a former governor and a defender of white supremacy during his time as a public figure.