University of Arkansas at Fort Smith students engaged in an upper level leadership class that works to develop community improvement didn’t just come up with ideas to benefit the region, they worked to implement plans that will make their ideas reality in Fort Smith.

The Community Leadership class, offered through the business department, has taken a nontraditional approach to learning for the past 12 years. Taught in the past by Fred Williams and Rusty Myers, the class is now led by Jerry Peerbolte, assistant professor of marketing.

Students in the class work in teams to research needs in the region and develop and complete a project. The class presented its final presentations Tuesday morning (May 4) at the Bakery District in downtown Fort Smith, where the UAFS economic development hub will be located in fall 2021.

Cristina Recinos, Randall Bieker and Holiday Hall presented on Alleyways, a program to create a safe and unique experience that will enhance the downtown Fort Smith business district and leverage other attractions. The group worked with Talicia Richardson, 64.6 Downtown executive director, and other Fort Smith business leaders for their project.

Hall said the group had the idea to complete an alleyway installment and looked at similar ideas in Austin and Dallas, Oklahoma City and Denver. With Richardson’s help, the group identified the alley from 911 to 914 Garrison Avenue as the best location for their light installation and got started on design ideas and funding. Though they encountered some hurdles, the group has been successful in obtaining funding for their idea and the installation should be completed and open to the public by the end of May or first of June, Hall said.

The group opted for a design that combines some of the elements seen in alley light installations in Austin and Denver but are making it unique to Fort Smith, Recinos said. It incorporates string lights, spheres and tube lights in colors and white. 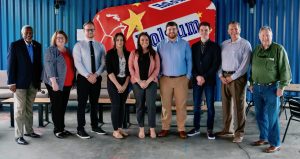 “It’s not just going to be white lights. There will be other colors. And with those colors comes more of the experience that we are hoping to achieve,” Recinos said.

The group originally budgeted for about $15,000, but the total cost is coming in closer to $16,500, Hall said. The group met with potential investors and was able to secure funding through private and corporate donors as well as some donated labor.

The lights for the project are expected to be delivered by Friday (May 7). Once the work is scheduled, it should only take three to four days to complete the installation, and the group hopes to be able to host a ribbon cutting ceremony towards the end of May or first of June.

“We are hoping for more of an event than just lighting,” Hall said.

“Since there are food trucks around there, we are really hoping to bring people downtown because that really is part of our mission,” Recinos added.

A sponsor will cover the electric costs of the student’s project, Richardson said.

The group hopes their work will inspire others to continue the alleyway art installations. Hall said when they were discussing the idea with other community leaders, one said there was another installation on the drawing board. Richardson said 64.6 Downtown has some key alleyways identified in the downtown corridor for future installations, but funding sources for the installation and for the electricity and maintenance still has to be identified. There also needs to be property owner buy-in, she said.

“We are working out the kinks, always knowing that this can be a work in progress, meaning you can install, but also add on. You can change out, make it more of a true representation of an art installation,” Richardson said.

Taking things in a different direction Derek Loyd and Hutchon Montgomery presented a potential UAFS program that will connect UAFS students with the Fort Smith business community in a forum that will encourage entrepreneurism, collaboration and experience sharing. Montgomery said the duo originally hoped to develop an idea for coworking space, which are essentially shared workspaces that allow multiple businesses to share not only the space for work and business but to the expenses of utilities, internet and rent as well. Shared workspaces often offer a suite of office-like amenities such as desks, private meeting rooms, kitchens, coffee and more.

When the group met with Bill Hanna about potential coworking space at the Bakery District downtown, they were already planning for such a project. The Bakery District, at 63 S. Sixth St. in what was the 1920s-era Shipley Baking Co., is owned by Hanna and celebrated its grand opening in June 2020. The historic baking facility still has its original brick and mortar walls but has been retrofitted with updated sound, lighting, and HVAC systems. The interior has been redesigned to host a coffee lounge/roastery, a catering kitchen, a beer garden with a bocce-ball court as well as indoor/outdoor event space, the company’s website said.

Hanna said in August that phase four of the Bakery District will transform another building attached to the baker, Parker Plaza, into The District Market. Phase three, which is in progress now, is the UAFS space at the Bakery District, which will be completed by Nov. 1. The District Market is in the design phase, said Tom Hanna. The co lab will be located on the second floor and is hoped to be completed in the fall, he said.

“So we had to make a decision. Were we going to abandon what we wanted or are we somehow going to integrate into something they are already doing,” Loyd said.

The two decided on the UAFS Co Lab, a program dedicated to providing students the opportunity to engage in cross-disciplinary activities as well as network with real professionals and community leaders, Montgomery said.

“We want UAFS students in that. We want them to get the benefits of that building,” he said.

The idea is that students can share in the benefits of the lab outside of the classroom, similar to the student ambassador program, Loyd said. The program would pay for membership of 12 students, giving them the opportunity to work with business owners and community leaders of Fort Smith. It would cost about $200 a month per student. At 12 students, that would be about $9,000 a semester.

“Obviously that sounds like a lot, but based on what can come out of it, it would pay huge dividends. It would help students stay here, starting new businesses, living here, working here and giving back to the community,” Loyd said.

The program will target students who desire unique opportunities to learn and build relationships outside the classroom, future pillars of the community, students more active and go above and beyond the classroom. It only will be offered to students in the Community Leadership class and those in the Dr. Kristin Tardif’s Collaborative Capstone Class as well as those nominated by faculty. Students who apply would then be interviewed by a panel made up of professors and community leaders and narrowed to 12 students. The ideal would be to have students from different majors working together in the space.

Groups would come up with business ideas or community projects and present a pitch that would include mock-ups, marketing plans and products, business plans, prototypes etc. The students were told that if the program is to receive funding, there would have to be a deliverable at the end of the program. The business idea or community project would be that deliverable, the duo said. Peerbolte said the exciting thing about this year’s projects is that each of them were going to happen.

“That’s really the great thing. I’m so proud of these students,” he said.