The 330 acres the city of Fort Smith purchased from Kansas City Railroad to develop into soft surface trails more than 2 years ago might go a little higher, more than six feet higher, and include the longest canopy trail in the United States.

“Soft surface trails utilize the natural surface of the land as opposed to a paved trail. These trails are inexpensive and can be developed much faster than a paved trail,” Doug Reinert, Fort Smith director of parks and recreation, said at the time of the purchase.

The land was purchased for $104,000 with city funds coming from the Trails and Greenways allocation for FY 2019 within the 1/8% Sales and Use Tax Program.

The city contracted with Bobby Aldridge and Frontier Engineering to develop a master plan to develop the trail system on the acreage. Following an announcement in April that he planned to present a concept plan to the Fort Smith Parks and Recreation Commission at their meeting in May, Aldridge said he was approached by Bill Hanna, president and CEO of Hanna Oil and Gas and Fort Smith Central Business Improvement District board chair. Hanna told Aldridge to “think outside the box” and see what grand idea he could design.

Prior to that discussion, Aldridge said they had come up with a plan for about five miles of cross-country flow trails on the property that would have a development cost of around $500,000. With the challenge to come up with something more creative, Frontier Engineering created a plan for an approximate 0.85-mile canopy trail to join the soft-surface trails.

Aldridge presented the concept plan to the Fort Smith Parks and Recreation Commission at its regular meeting Wednesday (May 12). 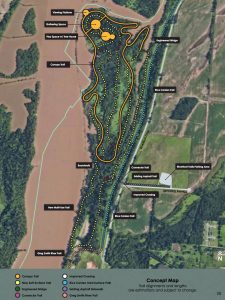 The concept plan was made to “provide guidance regarding the alignment of the trails and the required infrastructure. Fort Smith’s Canopy and Soft-Surface trails will enhance the opportunities for recreation for residents and tourists. Along the Arkansas Riverfront, these trails will serve as a downtown recreation spot off the easily accessible greenway,” Aldridge said in his presentation.

The project would expand recreational opportunities in the region and create trails that will serve users of all interests, ages, and skillsets.

“We believe trails are a tool for growth on individual and community-wide levels. These multi-use trails will be ideal for mountain biking, hiking, trail running, bird watching, education, and more,” Aldridge said.

The design by Frontier Engineering and Rogue Trails will be sustainable while elevating “the natural environment to enhance the user’s experience,” the presentation said. The trail combination will also create economic growth and can be a tool for drawing in more tourism, Aldridge said.

The Walton Family Foundation and PeopleForBikes studied the economic benefits of trail development in Northwest Arkansas. They concluded that bike tourism is a significant economic driver for the region. Tourists spent $27 million while visiting while locals pumped $21 million into bicycle goods and events. The studies indicated a total economic benefit for the region of $137 million in 2017, he said in the presentation.

The five-mile soft-surface trail will be a multi-use, two-way trail constructed via lift-and-tilt techniques that goes in and removes vegetation down to the soil level and then use soil stabilizers, which could include the addition of concrete to the soil, to keep the trails from eroding, Aldridge said. The cost of constructing the trails with the lift-and-tilt technique is estimated at $181,250 with the soil work costing an additional $75,000. Nine boardwalks ranging from 20 feet to 100 feet long will keep the trails durable and less susceptible to closure in wet weather. The estimated cost for the boardwalks is $51,000.

The trail also has an existing culvert crossing that was built many years ago when the property was a cotton farm. That structure would need to be renovated to make it acceptable for pedestrian crossing, or a new 65-foot long bridge would need to be built. The bridge could be wooden or metal or a combination of both. The bridge is estimated to cost $156,000. Renovating the existing structure would be less expensive, Aldridge said.

No bridle path can be included in the project because of the land and soil. Anything that can be constructed, even with soil stabilization, would not hold up over any length of time with the added weight of horses, Aldridge said.

It will be “guaranteed to evoke curiosity and wonder in both children and adults,” Aldridge said in the presentation. The majority of the trail will be around six feet off the ground, but a viewing platform around 20 feet high will overlook the Arkansas River with a clear view toward the Garrison Avenue Bridge, he said. The viewing platform will have a social space with an outdoor classroom area and treehouse play space, he added.

Aldridge said there would be several naming opportunities in the project, which could help raise private funds to make the overall project a private/public collaboration.

In order to make the viewing platform and public gathering space on the canopy trail most easily accessible to anyone wanting to use it, Aldridge suggested looking at the purchase of land across Riverfront Drive closest to that area of the trail to be used as a parking lot. With the trailhead connecting closer to the existing Riverfront Trails parking area, users would have about a half-mile walk to the viewing platform.

“Adding a closer parking area would mean more schoolchildren and those with disabilities would more readily utilize the area,” Aldridge said.