Due partly to the COVID-19 pandemic, the University of Arkansas athletic department reported a double-digit decline in revenue for the 2019-20 fiscal year. Still, the department came within  $500,000 of breaking even.

According to the university’s revenue and expense report submitted in January to the NCAA, Fort Smith-based Landmark PLC’s annual audit shows the department’s total revenue to be $123.35 million for the fiscal year. The 12-month period started July 1, 2019, and ended June 30, 2020. That’s down 10.2% from $137.49 million the previous fiscal year, giving some perspective on how the pandemic’s onset impacted the Razorbacks’ bottom line.

The department’s sharpest year-over-year revenue decline was the NCAA distribution. The NCAA canceled its highly lucrative men’s basketball tournament last year. That one event meant revenue distribution to its member schools was down almost 60%, USA Today reported in January. Arkansas’ portion was down 62%, from $3.22 million to $1.22 million.

The football program accounted for $70.28 million of the department’s total revenue or nearly 57%. That’s down from $75.75 million from the previous fiscal year. Men’s basketball brought in $18.72 million, down from $21.34 million.

The audited figures illustrate the specific financial hit absorbed by the department’s third revenue sport — baseball. The NCAA canceled the spring sports season once the pandemic took hold in March 2020.

Arkansas had $6.71 million in baseball revenue in fiscal year 2019, with expenses of $5.87 million, leaving the program with something that’s rather exclusive in NCAA Division I baseball — a profit. In fiscal year 2020, baseball program revenue was down 42% to $3.86 million, against $4.69 million in expenses. 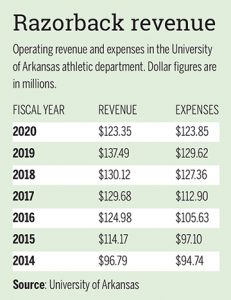 Ticket revenue saw a dramatic drop since the NCAA canceled most of the season, and the Razorbacks are among the top baseball programs each year in home attendance. The Razorbacks took in $1.17 million in baseball ticket revenue during the shortened 2020 season. The previous year, that number was $2.91 million.

This year, football and basketball games allowed a much smaller capacity — 16,500 fans for football and 4,000 for basketball — to adhere to Arkansas Department of Health guidelines. Speaking to the media in January, athletics director Hunter Yurachek said the revenue shortfall this fiscal year could reach $30 million.

Arkansas’ athletic department is self-sustaining and takes no student fees or taxpayer support.