Halff Associates of Little Rock has developed an alternate downtown Fort Smith truck route with an estimated cost of $4.5 million. The plan will be presented the Fort Smith Board of Directors at a Tuesday (Dec. 6) study session at the Fort Smith Convention Center.

James Arbuckle, vice president with Halff Associates, reported to the Fort Smith Board of Directors from a downtown traffic and truck study conducted throughout 2019 in February, offering “seven truck routing scenarios to reduce the negative impacts of large trucks traveling through downtown and to mitigate delays caused by conflicts between trucks and other travel movements.” Of those, two alternatives plus a no-build alternative were evaluated based on how well they addressed the project goals, objectives and performance measures, Arbuckle said.

Arbuckle, project manager of the Fort Smith Downtown Traffic and Truck Study, and his team spent most of 2019 meeting with key players, looking at survey results and reviewing traffic studies in order to come up with viable solutions to the downtown traffic.

The Fort Smith Board of Directors passed a resolution in November 2018 that authorized an engineering services agreement with Halff Associates of Little Rock for the Fort Smith Downtown Traffic and Truck Study. The study, not to cost more than $151,986, is based on recommendations from the Propelling Downtown Forward Plan, which was adopted by the board in August 2017 as “a master plan addressing specific development and revitalization issues in the downtown and Central Business Improvement District (CBID) areas,” information on the study states.

During the latter part of the study, an alternative truck route alignment was proposed by Phil White, downtown business owner and member of the Central Business Improvement District board of commissioners. White’s proposed route limits the stops and number of turns for trucks on Garrison Ave. It starts at the west end of the avenue at the intersection of Second Street. The Phil White Route (PWR) would depart from Garrison Avenue and the Second Street intersection at a skew and head northeast to B Street, east to Fifth Street, then south to Garrison Avenue, continuing southward until it merges with Wheeler Ave. 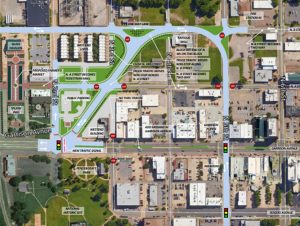 The plan would also call for Garrison Avenue to go from a four-lane street to two lanes with medians down the middle of the avenue. It provides free flowing traffic to move between Second and Garrison and Fifth and Garrison intersections. The route would be “tree lined and look nice,” states the Halff study that will be presented at the 6 p.m. study session.

“According to Mr. White, the purpose of the PWR is to remove trucks from Garrison (Avenue) through downtown. The PWR would become the truck route and trucks would be restricted from using Garrison (Avenue) east of (Second) Street,” the report states.

Truck access to the north would be along Fourth Street, and trucks traveling south would travel along Fifth Street to Wheeler Avenue.

“One of the more problematic moves would be truck traffic wishing to travel east to Rogers (Avenue). This traffic would have to travel on the PWR south along (Fifth/Wheeler) to Zero Street, then to I-540, then north to Rogers,” the study states.

The route has a $4.5 million price tag, according to the study.

Halff associates also met with the Arkansas Department of Transportation (ArDot) about the route. Their discussions showed ArDOT’s main concerns were skewed signalized intersection at Second Street near the base of the bridge, driver confusion and safety. There would need to be a stoplight at the intersection of Second Street and Garrison Avenue to allow for trucks to turn left. ArDOT representatives were concerned a signalized intersection at the base of the bridge could create stop conditions and back up traffic on the river bridge, the report states.

“Additionally, wayfinding challenges lead to safety problems, in that confused motorists are more likely to make unexpected maneuvers,” it states.