According to the latest summary of deposits report released in September by the Federal Deposit Insurance Corp. (FDIC), 39 banks operating 305 branches in the six-county area of Northwest Arkansas held $18.7 billion in deposits as of June 30. The six counties included are Benton, Carroll, Crawford, Madison, Sebastian and Washington counties. For a six-county market share breakdown, click here for a PDF.

The increase is likely only temporary due to the federal government’s extraordinary stimulus measures earlier this year and a cautious attitude from consumers toward spending and other activities during the pandemic.

“An increase in the overall liquidity of the banking system, which is reflected in an increase in bank deposits, can be attributed to a combination of government stimulus provided under the CARES Act, specifically through the PPP [Paycheck Protection Program] small business program and the individual stimulus checks as well as a general flight to safety that the banking system provides,” said Jon Harrell, CEO and board chairman of Rogers-based Generations Bank, and chairman of the Arkansas Bankers Association. “In regard to the PPP program, it is apparent that some small businesses are hesitant to spend the money until their loan has been forgiven and paid off.  Once that process begins in earnest, we may see some of the deposits decrease as these funds are utilized.”

The summary of deposits data is recorded by the FDIC at the close of business on June 30 each year and serves as a snapshot for financial data.

The top three banks in terms of market share were unchanged from a year ago. Fayetteville-chartered Arvest Bank, owned by the Walton family members, continues to have the most extensive deposit base with $7.09 billion in 62 offices throughout the six-county region. Despite growing deposits by more than 20% from $5.88 billion a year ago, Arvest’s market share is essentially the same at 37.9%. 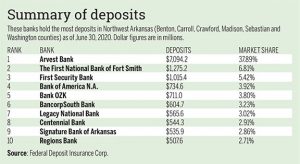 The First National Bank of Fort Smith is No. 2 in deposits with $1.27 billion (6.81% market share) in its 17 bank locations. Those totals include the bank’s local division, First National Bank of NWA, which has six branches in Benton and Washington counties: Rogers (2), Bentonville, Centerton, Lowell and Fayetteville.

Searcy-chartered First Security Bank topped the $1 billion mark in Northwest Arkansas deposits for the first time and is No. 3 in terms of market share. The company grew deposits by almost 20% in the past year to $1.01 billion (5.42% market share).