Marijuana has gotten plenty of attention in Arkansas since November 2016 when the state’s voters passed Amendment 98, which legalized medical marijuana.

But marijuana’s more sober cousin, cannabidiol (CBD), derived from the hemp plant, is making significant waves in the health and wellness category. And a group of “buds” in Washington County is at the forefront of the industry’s advancement in the state.

Around the office, they call themselves buds. It’s a synonym for the flower of a maturing plant. Like, for example, a marijuana plant. Besides that, the women are friends.

Brents (operations bud), Davoulas (business bud/general counsel) and Phillips (creative bud) started the venture in 2017 to offer branding and consulting services to the hemp and medical cannabis industry. Their initial conversations began in early 2016 when Arkansas’ medical marijuana amendment was readying for a vote later that fall.

“I had a previous background in cannabis in California,” said Brents, a Fayetteville native. “So I thought it was a perfect time, before anybody starts turning their wheels, to start thinking about brands and how we can bring those brands to life.”

Scott (formulations bud) joined the group later as a partner. According to Phillips, who owns a multidisciplinary graphic design studio in Fayetteville, Scott is the brains behind the science of the operation. Their company, which now has six workers, eventually developed, designed and brought to market CBD & Me, Shake Brands’ first organic product line of full-spectrum hemp oil-infused products. It’s a collection of 14 topicals, drops and pet formulas all made in Northwest Arkansas and sold directly to consumers through the website shopcbdandme.com. Consumers can also buy the products at more than a dozen specialty retailers throughout Arkansas, Missouri, Oklahoma and Texas.

CBD & Me, a registered trademark with the United States Patent and Trademark Office, is also U.S. Department of Agriculture certified. Shake Brands is one of just four companies in the South that is a USDA certified organic producer. It’s the only company in Arkansas that’s USDA certified for processing hemp self-care products.

“In short, we simply could not find local, quality self-care formulas in the marketplace that we would want to use every day,” Phillips said, referring to the creation of CBD & Me. “So, we decided to make our own.”

Since starting their business, Shake Brands has a portfolio of trademarked assets, has started a hemp grow in Georgia and has doubled its revenue each year. The company is on track to hit that milestone again this year, even with the setbacks of COVID-19.

The company also recently announced a partnership with NCPA (National Community Pharmacists Association) CBD Source, an online resource for community pharmacies looking for CBD product information. NCPA, which expects the CBD marketplace to hit $22 billion by 2024, says the goal of the online resource is to help community pharmacies make educated decisions about the growing CBD marketplace.

Davoulas is a Georgia native who’s a licensed attorney with a legal master’s degree specializing in intellectual property and marketing communications. She said a health-focused consumer base, the development of unique formulations and a chemical-free processing facility are driving Shake Brands’ growth.

“There’s such a big trend right now for organic products,” she said. “We knew we wanted to have products that were not only inspirational and functional from a health perspective, but we didn’t want to have a drop of chemicals in our entire lab from start to finish.”

HEMP HISTORY
Hemp and marijuana are varieties of the same cannabis plant, but hemp contains less than 0.3% of tetrahydrocannabinol (THC), marijuana’s psychoactive component. In other words, when used as directed, an individual isn’t likely to get high on hemp.

Hemp was previously considered a controlled substance under federal law, and its ties to marijuana meant it could not be produced legally in the United States. In 2014, that changed when Congress authorized state-licensed pilot projects for the cultivation of industrial hemp. 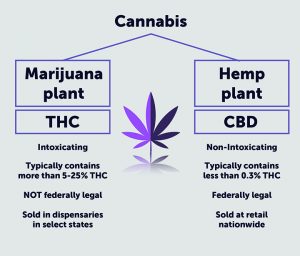 “Arkansas was one of the only states with a medical cannabis program coming out of the ground while an industrial hemp program was coming online,” Davoulas recalled. “Literally within a few weeks of each other. Cannabis licenses were announced, and [the 2018 farm bill] came right after that. It was sort of an afterthought for a lot of people. But that allowed us to get involved on the hemp side of the business and go after a processing license. At the time, everyone was distracted with all the litigation and hoopla going on in the cannabis business.”

ON THE HORIZON
Because CBD’s legal landscape is complex, the Shake Brands buds always have their eyes trained on any legislative movement that could impact the industry. They say there is an issue on the horizon in Arkansas that’s cause for concern.

“As the number is not addressed in the amendment, whether the [commission] would have the authority to limit them would’ve been a key concern had there been an effort [within the commission] to specify the total licenses available,” Hardin said.

Shake Brands anticipates applying for a cannabis processing license this fall, so it could make the same hemp-infused products it makes now, only with cannabis, then sell those to dispensaries around the state.

Regardless of the company’s stake in the process, Davoulas said there could be a significant risk to the industry if there are no limits placed on the number of processor licenses.

“I like a good Western movie as much as the next gal,” she said. “But given today’s climate, we’ve had our fill of the Wild West. And that’s what Arkansas would become with no caps in place.”

Brents said a healthy amount of regulation and compliance will make all the players in the market space better.

“We’re looking for reasonable restrictions that allow the [Arkansas] market to grow by prioritizing a limited number of manufacturers who are proven to be professional, Arkansas-based producers, and small business that are thoroughly vetted and focused on safety first,” she said.