In 2018, Major League Baseball star Bryce Harper, then an outfielder for the Washington Nationals, thrilled the hometown crowd at Nationals Park in Washington, D.C., by winning the MLB Home Run Derby during All-Star Week.

A Bentonville apparel and manufacturing company was along for the ride.

Harper, whose flowing hairstyle garners almost as much attention as the player himself, wore a D.C. flag headband that night manufactured by Junk Brands. A few days before the event, one of Harper’s representatives contacted the company through social media to say Harper liked its headbands and was interested in acquiring some to perhaps wear during the derby.

When the contest was over, fans who had watched on national television immediately wanted to know where they could find the apparel item. Many of them eventually found their way to Junk Brands, which at that point was especially popular among CrossFit athletes.

“Internally, I don’t think there were any expectations on our part,” Craig Lile, Junk Brands president and general manager, told The Washington Post a few days after the contest. “We thought there would probably be a restriction somewhere, that someone would tell him he couldn’t wear it, or he would forget them at his house, or he would change his mind and decide to wear a hat. There was no contract or promises made. It was an awesome happening that kind of came out of nowhere.

“We were just fortunate to piggyback on that.”

The Bryce Harper story is one of several highlight moments in the short history of Junk Brands. In just a few weeks, the fast-growing company embarks on another. On Aug. 18, Bentonville city planners approved a development plan for a 34,600-square-foot building at the corner of Southwest I Street and Melissa Drive.

When it’s completed, Junk Brands will be the sole tenant. The company’s existing headquarters is a 13,000-square-foot space at 1004 N.W. 11th St., off South Walton Boulevard near the Tiger Boulevard intersection.

Kourtney and Beau Barrett own that building. They launched Junk Brands in 2011, then sold the business to headwear apparel company Outdoor Cap Co. in 2017 for an undisclosed amount.

Junk Brands’ new building will bring the business in closer proximity to its parent company. Outdoor Cap, founded in the 1970s by Paul Mahan, is headquartered in multiple buildings on Melissa Drive. 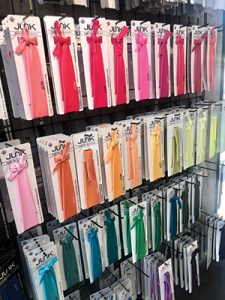 In a recent interview, Lile said the building will have warehousing, manufacturing and office space and should be move-in ready by 2021, sometime during the summer. Clinard Construction Management of Bentonville is the builder.

“Thinking about being in a building of that size is cool. It’s space that we need,” said Lile, a former University of Arkansas golfer who previously worked for e-commerce startup Country Outfitter/Acumen Brands in Fayetteville. He’s been president and general manager of Junk Brands since 2017. “We’ve been growing like weeds for a while.”

Lile said the company renovated its existing headquarters during the first half of last year, hoping that some added space would get the company through the next couple of years before looking for a larger headquarters.

“We knew [expansion] was coming,” he said. “We just didn’t think it would come this soon. It was probably early [in 2020] when it became a real topic.”

PANDEMIC PERFORMANCE
From a business perspective, Lile said Junk Brands has fared well during the pandemic. He said it’s not necessarily a point of pride, considering other businesses across several industries are not as fortunate.

“It’s a tough thing to talk about, but we have been doing well during this time,” he said, referring to the pandemic. Junk Brands has hired 30 full-time employees since March to keep up with online demand, Lile said. Most of those employees work in production, and the business now employs around 80 people.

Junk Brands has grown to include different kinds of apparel, including T-shirts, socks and neck gaiters. The company is still known, though, for its headbands, available in various styles and patterns. The design, production and distribution of those units are done in-house, Lile said, and the company turns out between 5,000 and 6,000 headbands per day.

Besides its e-commerce business, numerous specialty retailers sell Junk Brands headbands, and the company is licensed to sell products with Major League Baseball and NCAA logos.

“Major League Baseball continues to be a massive market for us,” Lile said. “We’re having conversations with some pretty well-known players whom I can’t divulge. It’s grown to a point where we can have these conversations with these athletes who are getting paid an exorbitant amount of money to figure out partnerships with them. They love and wear our stuff.”

Lile didn’t disclose specific revenue figures for the company. However, he did reference the Inc. 5000 list, the annual list of the 5,000 fastest-growing privately held companies in the country. It’s based on the percentage growth of a company’s revenue over a three-year period. Inclusion on the list is open to any private company in the country that wants to apply and disclose revenue figures. New York-based Inc. magazine compiles the rankings.

Lile said if Junk Brands were to register, the business would easily have been inside the top 1,000 firms on the list. Imalogix, a Pennsylvania software company, is ranked No. 1,000, with revenue growth of 462% in the past three years.