Pomrenke, the general manager of the Embassy Suites-Red Wolf Convention Center on the Arkansas State University campus, experienced construction delays due to unusually wet weather after the project’s groundbreaking in 2018.

Then, just months after the 203-room hotel and attached convention center opened to the public in December, the COVID-19 virus which became a worldwide pandemic made its presence felt on the hospitality industry in a large way in Arkansas and around the United States, forcing cancellations, delays or rescheduling of travel and conventions. “The convention center” side of the facility “has been dark for the most part.”

“We have had events of less than 100 people using distancing and have been successful at it,” Pomrenke said.

The facility has experienced the postponement of a number of group travel bookings and conventions because of concerns regarding the virus. However, most conferences and associations have re-booked for a future date, Pomrenke said. Fans of college football teams scheduled to visit Centennial Bank Stadium when their teams play the Red Wolves haven’t canceled yet, but there have been no increase in those bookings.

Pomrenke said the hotel staff and management have been able to cope with the situation in large part due to “a patient owner,” O’Reilly Hospitality Management of Springfield, Mo. O’Reilly executives promote the idea that “We’re all in this together,” he said.

During the period between Feb. 15 and March 10, the facility had hired between 50 and 60 new employees, only to have to reduce the workforce when COVID-19 restrictions were put in place.

“The core staff we opened with of approximately 56 people are still employed,” Pomrenke said. “I’m doing things daily that I might not ordinarily have done, but I’m a plug-and-play guy. We never shut our doors. Never thought about it. We made the adjustments necessary to keep the hotel operating.” 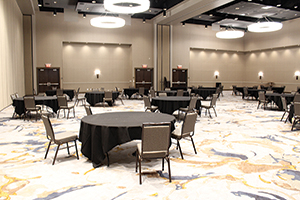 One initial adjustment was the creation of two teams of employees, Pomrenke said. Not knowing what the requirements might be for quarantining at home all members of a team if one team member fell ill from the virus, Pomrenke prepared the teams to be ready if that occurred.

“It has allowed my [entire] team to form a little closer,” he said.

“We built the hotel for the demand in Jonesboro,” Pomrenke said, and business on the hotel side of the facility is still strong. The hotel continues to host business travelers and what he calls “day-of” bookings have been strong.

“That has been a pleasant surprise,” Pomrenke said.

Some of that may be due to the Embassy Suites being one of the brands that is under the Hilton flag.

“This brand does very well. This model [of a full-service hotel and connected convention center] works,” he said. “In fact, we probably under-built on the guest side.”

In some instances, Pomrenke said they are pushing rooms out to other hotels in the community.

“This is a great example of how a convention center can help,” he said.

U.S. hotel performance data from industry analyst STR indicates that the week ending July 18 showed slightly higher occupancy and room rates from the previous week. From its low point of 22% in the week ending April 11, the national hotel occupancy rate rose to 47.5%. In the comparable week in 2019, occupancy was greater than 80%.

Among the adjustments made during the pandemic, Pomrenke said, is the adoption of the Hilton Clean Stay program, which calls for rooms to be cleaned as normal, then sanitized by the housekeeping staff. Following that, an inspector visits the just-cleaned rooms and both inspect the room and re-sanitize high-touch areas before affixing a door seal decal on the door upon exiting. Guests also will find a supply of Lysol-brand products in their rooms for their own use.

Pomrenke said he and the staff can’t wait to get through the COVID-related reduction in business.

“I feel very confident that when normalcy — however that is defined in the future — returns, so too will group travel and convention bookings. People are itching to travel, itching to get together,” Pomrenke said. “We’re going to be very busy.”