Updated COVID-19 modeling from the University of Arkansas for Medical Sciences (UAMS) shows fewer cases and deaths than expected a few weeks ago, but warns that the state could soon lose the “ability to effectively contact trace” without timelier test results.

Not only do the number of deaths, new cases and hospitalizations decline in the new “eSIR” model, but the peak for the categories is pushed from late October to mid and late November. The eSIR model predicts total infections, including asymptomatic infections, the number of active cases, the demand for hospital beds, ICU beds, and ventilators at the peak of the epidemic in Arkansas. (Link here for a PDF of the updated modeling.)

“Figures for the worst case scenario are, of course, higher and are provided for comparison. The worst-case model is outside the 85% confidence zone and has a less than 5% chance of being the actual estimate for that time period,” UAMS noted in its updated modeling report.

The updated UAMS report also picks up on a concern about the lack of nationwide testing capacity expressed in recent weeks by Gov. Asa Hutchinson. The governor has said demand on commercial labs from rising cases in Arizona, California, Florida, Texas and other states has reduced the number of commercial lab test results in Arkansas. The lack of capacity will likely result in the state missing its goal of 200,000 tests results in July. The ADH said July 14 it is working to double its testing capacity by acquiring two “high thru-put instruments.”

“We are at a time period in Arkansas in which we will learn whether we can gain some type of control over the COVID-19 epidemic in the state,” UAMS noted. “It was clear from earlier and current projections Arkansas is on the verge of losing the ability to effectively contact trace because of high numbers of daily cases. To be effective, test results must be reported and cases notified and contacts traced within 24 to 48 hours.” 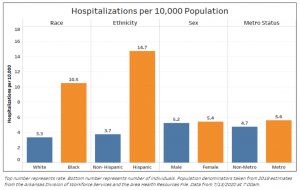