This is year eight in Walmart’s decade-long commitment to source an additional $250 billion in products made in the U.S., but COVID-19 prompted the retail giant to postpone this year’s Open Call. A new date has not been announced.

Open Call is a two-day event for Walmart buyers to meet face-to-face with entrepreneurs with one goal in mind: Buy more American products.

While the meeting rooms at Walmart’s home office have been empty since mid-March under work-from-home orders, the company said buyers continue to speak with suppliers and seek out new products from entrepreneurs and expand business with other suppliers.

Earlier this year, Walmart began using a digital platform called RangeMe that allows suppliers to load their items onto a website for buyers to review. Other retailers from Albertson’s to Target also use RangeMe to help discover new products.

Walmart said prospective suppliers can set up the free account at RangeMe.com and begin building a supplier profile. Completing information on the RangeMe site will streamline the required steps once the next Open Call process begins. Walmart also recommends that prospective suppliers consider generating sales history by applying to be a Walmart eCommerce supplier.

Walmart declined to say whether it has added products from the RangeMe platform or gauge how many suppliers might have attended Open Call if it had been held in mid-June. In past years, Walmart has seen more than 500 suppliers pitch products during Open Call, with approximately 100 getting the green light to proceed.

“Now in its eighth year, Walmart’s $250 billion commitment to investing in American products and helping create jobs is on track to meeting its 2023 goal,” said Scott McCall, chief merchandising officer for Walmart U.S. “We look forward to partnering with suppliers across the country to bring great products to our customers. Additionally, we will continue looking for opportunities with minority-, woman- and veteran-owned companies, as we believe success within these core groups can help strengthen economies within the communities we serve.”

Walmart said that since 2013, it has brought on dozens of new suppliers and expanded existing relationships with long-term suppliers. That said, Open Call is just one way buyers find new products. Walmart buyers also attend supplier expos and trade shows and work with brokers to look for new and innovative products in their respective categories.

Walmart said the 10-year commitment has been a journey making a tangible impact on communities across America.

“We’ve seen factories opened, jobs created and new products added to our shelves in stores and online,” said Charles Crowson, Walmart spokesman. “Based on data from Boston Consulting Group, an estimated 1 million new U.S. jobs could be created through this initiative, including direct manufacturing job growth of approximately 250,000 and indirect job growth of approximately 750,000 in the support and service sectors.”

Walmart also said items made, assembled, sourced or grown in the U.S. account for about two-thirds of what is sold in stores, much of which is food and other consumables.

STARTING SMALL
Joe and Maranda Dowell, owners of Atlanta-based Joe’s Gourmet Fish Fry attended Open Call in June 2017. Maranda Dowell said on a whim she went to Walmart’s website to learn what it took to be a supplier. The couple had their breading/seasoning mix in Publix, H-E-B, Winn-Dixie and Meijer grocery stores. Dowell signed up for the Walmart newsletter and when the Open Call announcement was made, she applied.

She said the couple bootstrapped their business by selling their original recipe. They held fish fry events and sold prepared fish at fairs and various occasions when consumers wanted to buy the breading/seasoning mix to take home. 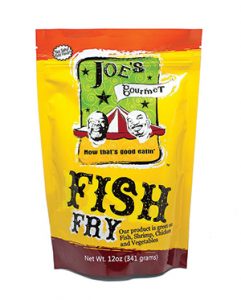 “We began making the product in our kitchen, but when Walmart gave us 200 stores to start with, we had to scale up quickly,” she said. “We got the product in Walmart in 2018 and also got a deal on ‘Shark Tank,’ and our online sales grew immensely after that.”

Dowell said Walmart has been great to work with. In the past year, the couple approached the retailer about leasing restaurant space in a Walmart store in a nearby Atlanta suburb.

“We leased the space that was formerly occupied by McDonald’s and opened our fried fish for eat-in and takeout,” she said. “We opened two months before COVID-19 hit, which was scary. But it ended up being OK because it turned out the Walmart was one of the few places to stay open. We sold takeout, and we saw our sales start to rebound. This is a great model for us because it feeds itself. People try the finished product and want to buy the seasoning sold in the store.”

Joe’s Gourmet Fish Fry is now in 700 Walmart stores, including most of central and eastern Arkansas. Dowell said Walmart has helped the business grow, but cautioned prospective suppliers to invest in learning the systems at Walmart and dive in 100%.

“It can be costly if you don’t,” she said. “Also, think about the sell-through. It’s great to get the product in the stores, but some promotion will likely be necessary to get consumers to try it.”

The company used national promotions, looked for every opportunity to pitch their product on television and held store demonstrations. The owners said tasting the product was key in getting people to buy it for the first time.