Effective communication is a critical part of any attempt to persuade others. Martine Pollard has built a career in that field.

For the past nearly 10 years, she has worked for Mercy Northwest Arkansas in Rogers. She is the healthcare provider’s executive director of community and public relations.

During the public health crisis of the past few months, Mercy, like other healthcare providers, has shifted its messaging and marketing strategy because of COVID-19, the illness caused by the new coronavirus. Pollard’s job has become something of a unique role, too. In addition to representing Mercy, she’s representing the interests of the entire regional healthcare community through a Northwest Arkansas-focused public service announcement (PSA) campaign.

To help stem the impact of the deadly virus, Northwest Arkansas healthcare providers — in collaboration with the Northwest Arkansas Council, other community officials and regional leaders — launched a campaign called “Safe and Strong.” The core message is to persuade people that social distancing, surface cleanliness, personal hygiene and wearing a face covering can prevent further community spread of the virus and keep hospital capacity from becoming strained.

Pollard’s role with the campaign is the liaison between the healthcare providers — Washington Regional, Northwest Health, Arkansas Children’s Northwest, Veterans Health Care System of the Ozarks, the University of Arkansas for Medical Sciences, and Community Clinic NWA. They, along with the Whole Health Institute in Bentonville, are part of the Northwest Arkansas Council’s healthcare transformation division, established in July 2019 to implement recommendations of a study that demonstrated that the region was losing nearly $1 billion per year due to the outmigration of high-level specialty care.

Pollard said the origin of developing a unified public awareness message evolved from those discussions.

“That’s where [the conversations] started,” Pollard said in a recent interview. “Anecdotally, probably in early May, we started seeing that people weren’t necessarily adhering to the [recommended] social practices. Of course, there are several models we hone in on. But knowing that we were likely looking at a surge coming at some point, we felt like it was important to get a PSA out there.” 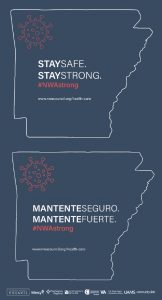 Mercy has, in essence, lent Pollard’s voice to the campaign to help organize the PSA messaging on behalf of all providers involved. While there is a uniqueness to each of them, she said the things they do have in common are providing exceptional care and sharing credible information.

The work, she said, is different from anything she’s experienced in her career.

“People that know me know I am very passionate about our community,” she said. “The thing I think about every day is recognizing that this will be unlike any other moment, I suspect, in my lifetime. We are keeping the focus on what we are doing, what is best, during the pandemic, not just for the region but the country. Putting our communities at the center of what we do — I can’t think that there is more important work than that.”

CRITICAL MESSAGING
In a Zoom webinar on June 24, speaking with members of the Elevate CEO Forum in Fayetteville, Dr. Joe Thompson, Arkansas Center for Health Improvement president and CEO and a former state surgeon general, underscored the importance of effective communication during the pandemic.

“Our single biggest weapon right now is the percentage of people we can convince that this [COVID-19] is a real issue, and who will start to be more compliant with the guidance of face masks,” Thompson said.

“We’re losing control of it [the virus] here in Arkansas,” he said. “We don’t want to be a hot spot for a [extended] period, and at least three states in the northeast have labeled us that now.”

Dr. Pearl McElfish, vice chancellor of the UAMS Northwest Campus in Fayetteville, says the campaign is part of a more significant collaborative effort to reach all people with messages about prevention and testing, specifically the Latino and Marshallese populations, which are seeing a rapid community spread.

Riklon is a researcher at UAMS in Fayetteville and part of a task force formed to educate Marshallese migrants about the COVID-19 pandemic.

Kelvin Parks, medical center director of the Veterans Health Care System of the Ozarks (VHSO) in Fayetteville, said the campaign has worked hard to reach the minority population. He described the effort as “ongoing” to meet changing needs and to address issues as they become known.

He praised UAMS’ Office of Community Health and Research for producing materials in Spanish and Marshallese languages, making it easy for each healthcare system to distribute broadly. He also noted the work of Larry Bottin, the VA’s minority veteran coordinator. It’s a full-time role, and Bottin’s job is to work with minority veterans to ensure they have readily available access to their healthcare to include COVID-19 information and testing.

Parks said the “Safe and Strong” message is getting through, but there is still work to be done to ensure everyone receives the campaign information.

“The [healthcare] partners throughout this community have been diligent with their assistance to provide support,” he said. “However, we know our region is large and encompasses a substantial rural geographic area. For those reasons, we must continue to make this a daily, combined effort to ensure all in the Northwest Arkansas region have access to the most current information and resources provided through the campaign.”

WHAT’S NEXT?
The full scope of the “Safe and Strong” PSA campaign continues to take shape. The regional healthcare community launched COVID-19 daily briefings via email on June 29, in English and Spanish, and shared them with the media and other community partners. A formal briefing tailored specifically to Northwest Arkansas — similar to Gov. Asa Hutchinson’s daily briefing — also is being discussed.

“It probably won’t be daily, but it will be frequent,” Pollard said.

Nelson Peacock, CEO of the Northwest Arkansas Council, said the next phase of the campaign will start in July and include a paid media blitz to promote the messages to the entire region and hard-to-reach populations — Latino and Marshallese communities.

“Working with state and regional public health officials, [healthcare transformation] division members have been working hard to communicate the seriousness of COVID-19,” Peacock said. “Despite those best efforts, there have been increases in cases across the state and here in Northwest Arkansas. We are working to increase testing, increase contact tracing, and get the word out that everyone should follow public health officials’ guidance to reduce the spread of COVID-19.”

Peacock said it is clear more work needs to be done to get the message out from leadership at the federal, state and local levels.

“For the council, we are hopeful that this multichannel outreach campaign coupled with trusted navigators conducting on-the-ground outreach in hard-to-reach populations will help flatten the curve,” he said.

Previous post
Trucking economist: Recovery could be a Nike ‘swoosh,’ or a ‘W’
Next post
Jonesboro city officials to recommend masks in public