After being leery of earlier dire predictions about COVID-19 infections in the state, Gov. Asa Hutchinson on Tuesday (June 23) said Arkansans should take serious the modeling that shows the state could face more than 133,000 known cases and 3,326 hospitalizations by Sept. 30.

The governor, speaking from Arkansas State University at Mountain Home during his daily COVID briefing, said it is up to state health officials and citizens – especially citizens – to change the trajectory of modeling from the University of Arkansas for Medical Sciences (UAMS). The modeling, first reported June 13 by Talk Business & Politics, predicts 133,056 total infections, 3,326 hospitalizations, 997 ICU beds needed, and 698 ventilators needed by Sept. 30.

Both predictions would exceed the state’s hospital capacity. According to the Arkansas Department of Health (ADH) figures provided Monday, there are 8,917 hospital beds in the state, with 2,552 beds available, and 970 ICU beds with 222 available. ADH figures also show the state’s medical facilities have 894 ventilators with 583 available.

Also alarming, the COVID-19 cases as of Tuesday exceed the number predicted by the UAMS model. Gov. Hutchinson said the state’s increased focus on testing, contact tracing, and constant reminders to citizens to practice social distancing and wear masks are the ways he hopes the reality comes in lower than the UAMS predictions.

“Our goal is to change the trajectory. How do you change the trajectory? You do it by what the Department of Health is doing so well, which is going in, along with the CDC [U.S. Centers for Disease Control and Prevention], and doing massive amounts of testing, we do our contact tracing, and then we do our isolation. And we break up those strains of transmission. That is the objective and that is what we have to do,” he said. 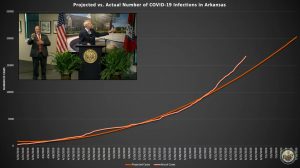 When asked about the UAMS numbers exceeding capacity in terms of hospital beds, ICU beds and ventilators, Gov. Hutchinson expressed confidence that the state’s hospitals would work together to shift resources. He also said the state continues to build its inventory of ventilators and now has orders pending for more ventilators.

“We’re preparing, even if it’s a worst-case scenario, although we certainly hope that that will be avoided,” he said.

Cases in correctional facilities were largely from the Benton County Jail with 188 cases among inmates and 13 with staff, and 128 cases in the Arkansas Department of Correction’s Ouachita River Unit in Malvern.

Gov. Hutchinson and Arkansas Secretary of Health Dr. Nate Smith were asked about concerns that July 4 celebrations would be similar to several Memorial Day events in which large crowds were gathered without masks and not practicing social distancing. Arkansas COVID cases are up 167% since Memorial Day. Gov. Hutchinson said citizens and communities “need to be mindful around July 4th, as to how we conduct our celebrations.” He said he hopes to not hear about a block party resulting in a large number of cases.

Smith said post-July 4 outcomes will depend largely on lessons learned from Memorial Day.

“If we have learned absolutely nothing from Memorial Day then probably we will see the same thing. I think we collectively, as a nation, as a state, have seen what can happen, and we don’t want that to repeat. I think we all know the things that we need to do to protect each other. So I hope that we don’t do the same things and have the same results,” Smith said.