The property, dubbed by the land trust Blackburn Bluffs Preserve, is adjacent to Rotten Bluff Hollow, a privately owned 725-acre tract the land trust protected working with Fayetteville residents Tina and Paul Green and a conservation easement agreement in late 2019.

Together, the properties establish a 1,025-acre protected corridor for the movement of wildlife under the interstate.

Permanent conservation of the two properties protects 2.5 miles of Blackburn Creek, a tributary in the Lee Creek Watershed that supplies drinking water for more than 200,000 people in the Fort Smith metro area.

In the past five years, much of the land in the area has sold for timber interests, subdivided and rezoned in anticipation of future development. The conservation of Blackburn Bluffs Preserve alongside Rotten Bluff Hollow forms an anchor for continued conservation efforts to the east and west.

The land trust seeks to work with willing landowners in the proposed corridor to place voluntary conservation easements on private lands and willing sellers who support the effort.

The outcome will create a landscape-scale network of public and private conservation lands, linking the two tracts of Ozark National Forest. 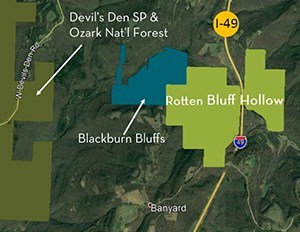 “Just as roads and bridges link people to towns and cities, wildlife corridors link habitats for plants and animals across a landscape,” said Marson Nance, director of land protection and stewardship for the land trust. “As growth continues in Northwest Arkansas, habitats are increasingly being fragmented by roads, neighborhoods, and shopping centers. While these amenities are fantastic for growing our vibrant communities, they can have lasting harmful effects for local populations of wildlife.”

The Blackburn Bluffs Preserve purchase is the first fee-simple acquisition in the 17-year history of the land trust, according to the spokeswoman Lauren Embree.

The land trust is seeking financial support to raise $500,000 toward their purchase of Blackburn Bluffs Preserve and to enable further acquisitions.

“Donors make this work possible,” executive director Terri Lane said. “The sooner we can reach our $500,000 goal, the sooner we move on to save other critical natural areas before it is too late. We appreciate everyone who helps us save land for the future of our growing region.”

The Northwest Arkansas Land Trust manages nearly 4,500 acres from approximately 25 properties throughout a service area that includes 13 counties in Northwest Arkansas. Some of the lands protected are in conservation easements, in which the landowner retains rights to the land, and the land trust owns the easement.