Northwest Arkansas was the 13th fastest-growing metro area in the United States between 2010 and 2019 and the 24th fastest growing metro from 2018 to 2019, according to the U.S. Census Bureau.

The Census Bureau released Thursday (March 26) updated population estimates as of July 1, 2019, for 3,142 counties and 384 metropolitan statistical areas in the United States. This will be the last set of estimates the agency releases for the counties and metro areas before the 2020 Census, from which data is expected to be released starting later this year and into 2021.

“Northwest Arkansas is just booming in population and economic growth,” said Michael Pakko, chief economist and state economic forecaster for the Arkansas Economic Development Institute (AEDI) at the University of Arkansas at Little Rock. “That’s part of the makeup of the state’s economy. That’s where we are seeing a large share of the growth in the economy and the population.” 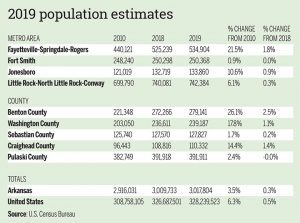 Pakko explained the connection between population growth and economic growth holds for both Northwest Arkansas and Northeast Arkansas, which includes the Jonesboro metro area.

“What we’re seeing is population growth and economic growth going hand in hand,” he said. “Those are two parts of the state that are showing the highest growth rates in employment, so there’s kind of a feedback relationship there. People are migrating to where the jobs are. That creates more economic activity and more jobs. There’s really these pockets of growth in the state.

“Central Arkansas is also growing but at a much more modest pace,” he added. “Then, you’ll find all around the rest of the state much slower growth rate of both population and economic growth.”

Pakko said a long-term trend has been for population growth in metro areas, especially as the economy shifts to a service economy. Most metro areas are doing better than rural parts of the state. In the Little Rock metro, there’s not a lot of new developments and growth, but the state capital has a diverse economy and continues to grow as the largest metro area in the state, he said. And it’s benefitting from the central position within the economy.

Regarding the Fort Smith metro, he said the population trends have reflected the economic trends there. The growth rate in Fort Smith has been low as a result of setbacks with the loss of manufacturing jobs dating back to the Great Recession, Pakko said, adding that he wasn’t surprised to see the low population growth.

COMPONENTS OF CHANGE
AEDI demographer Diego Caraballo said he was surprised at the level of international migration coming to the Northwest Arkansas metro, at nearly 11,000 over the past decade while the Little Rock metro had almost 8,000. Northwest Arkansas also had the highest net migration in the state from 2018 to 2019, at more than 6,000 in total net migration, compared to about 150 in the Little Rock metro and almost 750 in the Jonesboro metro.

The Fort Smith metro lost population as a result of migration, Caraballo said, noting that more people are moving from the area than moving in. It had a negative net migration of nearly 500 from 2018 to 2019. With regard to the Jonesboro metro, domestic migration accounted for most of the net migration there.

“You’ll see the largest percentage increases of population there, and that contributes to the overall population of the metropolitan area but less growth within the central county,” he said.