Dallas-based developer Cawley Partners announced Tuesday (March 10) construction has started on a new 150,000-square-foot building along Interstate 49 in Rogers. The new building will serve as a regional operations center for Transplace, one of the country’s largest providers of third-party logistics services.

“We couldn’t be happier about partnering with Transplace on this project,” Bill Cawley, chairman and CEO of Cawley Partners, said in a statement. “This is a company that’s leading the way in logistics services and we have the opportunity to work with them to develop an innovative operations center that supports their growth initiatives. We’re looking forward to kicking off development and providing an exceptional new office for Transplace.”

In Northwest Arkansas, Transplace is now based at 509 Enterprise Drive, just off Interstate 49 in Lowell, where it employs about 600 workers in approximately 80,000 square feet of office space. The move to Rogers — into what the company refers to internally as a Center of Excellence (COE) — is expected to increase the number of workers in Northwest Arkansas to between 1,100 and 1,200, with an estimated $60 million in payroll.

Cawley Partners said the building is on schedule to be completed in May 2021.

The approximately 15-acre site is south of the Cedar Brook neighborhood on the recently built Magnolia Street, a new east-west artery that now crosses over Interstate 49 and connects to South 52nd St.

When the project is finished, Cawley Partners will own the building. Robbie Baty, Bill McClung and Marshall Saviers of Cushman & Wakefield represented Transplace in the deal, and will lease the entire building upon completion.

A ceremonial groundbreaking for the building that included the governor, the mayor and other state and local economic development officials took place in March 2019. HCH Consulting, led by Rogers developer Hunter Haynes, was the original developer. HCH later conveyed the land and development rights for the project to Cawley Partners, a major player in the Dallas-Fort Worth development scene. 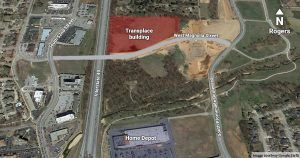 Cawley Partners said the three-story hybrid tiltwall is the first of its kind in Northwest Arkansas. The new development will feature courtyards, lighted pedestrian walkways, a retention pond and more than 1,000 parking spaces.

“We envision this new building as being a showcase of our competitive advantage, heightening our ability to attract and retain the best and brightest talent that Northwest Arkansas has to offer,” Frank McGuigan, CEO of Transplace, said in a statement.

Crossland is the general contractor. Corgan is the building designer.

In March 2019, the Rogers City Council unanimously voted to issue $46 million in industrial revenue bonds to the original building developer.

At its Jan. 14 meeting, the council voted to increase the amount of industrial revenue bonds for the new developer to $55 million.