The number of COVID-19 cases has risen from 16 to 22 between Sunday and Monday, with a “significant increase” in the number of cases expected to rise as more testing is conducted, Gov. Asa Hutchinson said Monday (March 16).

As of Monday, the Arkansas Department of Health reported 22 positive COVID-19 cases in Arkansas, 14 persons under investigation, and 258 people who are being monitored “with daily check-in and guidance because of an identified risk.”

The U.S. Centers for Disease Control and Prevention (CDC) has said the ongoing pandemic outbreak of respiratory disease is caused by a novel (new) coronavirus that was first detected in China and which has now been detected in more than 100 locations internationally, including in the United States.

Speaking at a press conference held at Washington Regional Medical Center in Fayetteville, the governor said testing “will be dramatically increasing in Arkansas in the next week.” State officials have previously said that the Arkansas Department of Health, in conjunction with the University of Arkansas for Medical Sciences, is working to acquire a new testing machine to boost testing capacity from 20 a day to 160 a day. 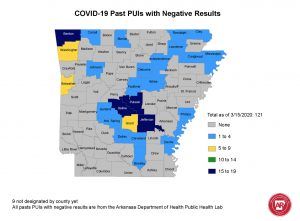 Of the six new cases, two are from Cleburne County and are tied to travel to an out-of-state conference, according to Arkansas Secretary of Health Dr. Nate Smith.

“This is not a time to travel to large conferences or large gatherings,” Smith said.

Gov. Hutchinson noted that updated guidelines from the CDC recommend limiting indoor events to no more than 50 people. He said that does not apply to 50 or more people being in a restaurant, grocery store, or workplace.