From 2013-2017, Northwest Arkansas saw one of the biggest contrasts between inbound migration and outbound migration in a snapshot of Midwestern communities.

A new graphic released by the Federal Reserve Bank of St. Louis highlights net migration trends for several prominent metropolitan statistical areas in the sprawling Eighth District. Most of Arkansas, including Benton and Washington counties and the Fayetteville MSA, is included in the St. Louis Fed’s region.

29,768 more residents moved into the region during the four-year time span than moved out. In other words, Northwest Arkansas averaged 7,442 net in migration annually from 2013-2017.

That gap underscores the rapid net population growth the region has witnessed, according to Mervin Jebaraj, economist with the Sam M. Walton College of Business at the University of Arkansas. 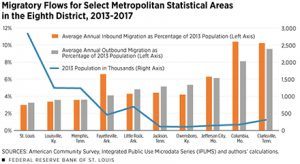 “The chart that the St. Louis Fed put out confirms what we already see in Northwest Arkansas. More than any other region in Arkansas, and most of the Eighth Fed district, Northwest Arkansas’ growth comes from people moving into the area,” he said.

The Fayetteville MSA and the Columbia, Mo. MSA were the two strongest net migration regions in the Fed snapshot.

From 2017 to 2018, Benton County saw its labor force grow by another 1.3%, while Washington County grew by 1.4%. Arkansas’ overall labor force growth was just 0.8% and the national average was 1.5% during this time span.

Last month, data from the U.S. Labor Department’s Bureau of Labor Statistics (BLS) showed that Benton County had the largest second-quarter yearly wage gain among the nation’s 355 largest counties at a robust 16.3% gain. Job opportunities and wage growth are attractive in drawing new residents to metropolitan areas, but other factors can also be influential, Jebaraj said.

“It’s a testament to not just the businesses in the area that are expanding and hiring, but also to the community leaders who invested significantly in building a mix of amenities that is attractive to people from all around the country,” Jebaraj added.