In the mid-1970s, Walker was a loan officer in Bentonville with the Federal Land Bank System, established by Congress to provide mortgage loans to farmers and ranchers. It’s known today as Farm Credit System.

Walker was servicing what was at that time a significant part of Benton and Washington counties’ economy: poultry and agriculture.

“There were more poultry companies here than vendors and retailers,” he recalled.

Early in 1978, Walker got a telephone call from Burt Stacy, a friend of his who had just been hired as president of The Bank of Bentonville. At the time, it was the largest of a three-bank network in Benton County owned by the Walton family, along with Bank of Pea Ridge and First National Bank & Trust Co. in Rogers. The company, still controlled by the Waltons, is known today as Arvest Bank Group Inc.

Stacy wanted to know if Walker would be interested in a job as a loan officer with the Bentonville lender.

“I need someone who understands agriculture,” Stacy told Walker. “But I need you to meet with Mr. Walton. He hires all the officers.”

Mr. Walton meant, of course, Sam Walton, a respected retail businessman in Bentonville. He and his wife, Helen, purchased The Bank of Bentonville for about $300,000 in 1961, one year before the launch of Walmart Inc.

“Could you meet with Mr. Walton for an interview tomorrow at 5:30?” Stacy asked.

“No, no,” Stacy said. “5:30 tomorrow morning. At the Holiday Inn. Mr. Walton will be having breakfast before he goes to work at Walmart, and he’d like to interview you for the job.”

Walker agreed to the early-morning meeting, and by the end of the day he had a job offer. He accepted, and for the next four decades he helped build Arvest into one of the state’s leading business success stories.

In Walker’s tenure, Arvest has grown from 100 employees and eight Arkansas branches to roughly 6,400 employees and 280 offices in Arkansas, Kansas, Missouri and Oklahoma.

Total assets now exceed $19.2 billion, and Arvest is the largest bank in Arkansas in terms of deposit market share.

Through it all, Walker’s leadership has been significant.

“[Walker] has been involved in every major strategic decision at Arvest Bank for decades,” Arvest Bank President and CEO Kevin Sabin said. “Including coming up with the name Arvest. And if you looked back on his career, if you talked to all the people that worked with or for Don, every one of them would say they consider him a friend. That doesn’t always happen.”

Early next year, Walker, 68, will retire. He will step down from his job as a regional executive on Jan. 31, ending five years in that role and winding up a 42-year career with Arvest.

A regional executive has oversight of multiple markets in the Arvest footprint. Although all Arvest markets are technically part of the same Fayetteville charter, the company currently maintains 14 separate community banking markets in Arkansas, Kansas, Missouri and Oklahoma. Each has its own executive team and advisory board.

Arvest has two regional executives. Walker and his Oklahoma counterpart, Brad Krieger, each have oversight of seven markets.

During a recent interview at his Fayetteville office, Walker said it was time to move on to the next phase of his life.

PIVOT FROM POULTRY
Walker had a career goal as a young man to work in the C-Suite. But it wasn’t in the banking industry. It was poultry.

Walker grew up on a cattle and poultry farm in Washington County. He graduated from Farmington High School in a class of 35 students in 1969, then earned a poultry science degree from the University of Arkansas in 1974.

“My dream job was going to [work in] the executive wing with Tyson Foods,” he said. “Growing up on a commercial broiler and turkey farm, that was my experience. That’s why I minored in business. I was ready to leave the farm and get into the financial aspect of the industry.”

Walker did work for Tyson Foods briefly before pivoting to finance with the Federal Land Bank. He called the job a terrific training ground for a young agri lender in the two-county area.

When he started work for The Bank of Bentonville, agri lending dominated the bank’s loan portfolio. It later became a large real estate lender, thanks in part to the residential construction boom going on in nearby Bella Vista.

“That was a real opportunity for the bank,” Walker recalled. “We started making home loans because there weren’t a lot of [lending] options for retirees moving to Bella Vista.”

“Mr. Walton always said — and Jim followed this too — that the home loan for our customers is their largest investment, and we want to be a part of that,” Walker said. “If we can help them with their home loan, we’ll always be able to help them with all their business.”

That attention to real estate lending led to the formation in 1981 of Arvest Mortgage Co., which has originated more than $1 billion in mortgage loans for 17 consecutive years.

“That all started at The Bank of Bentonville,” Walker said.

FROM ARKANSAS TO TULSA
Walker spent the first 20 years of his Arvest career in Benton County. When the holding company — then known as Northwest Arkansas Bancshares — expanded to western Benton County in 1984 through the acquisition of First National Bank of Siloam Springs, the company tapped Walker as that bank’s CEO.

“I had the most experience of anyone inside the company, and as we have always done, we give our people the first opportunity,” Walker said. 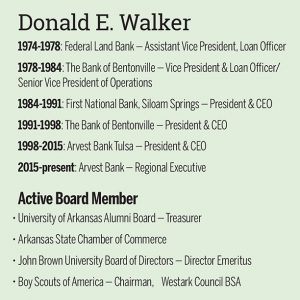 “That was a large market, and that’s why I chose to take a chance and move my family to Tulsa,” Walker said. “It was not [a decision] that was easy. But I felt if the company was going to move into larger markets, I needed to understand those markets and help carry our culture there.”

During his 17 years in Oklahoma, the Arvest Tulsa market grew from $450 million in assets to roughly $2.5 billion. It is the most profitable of the company’s 14 markets.

The 1984 acquisition of First National Bank of Siloam Springs started a significant expansion phase for the company. In 1986, it purchased McIlroy Bank & Trust in Fayetteville, the company’s first venture outside Benton County. During the next two decades, the bank expanded its presence within its home state and in neighboring states through acquisitions in Arkansas, Missouri and Oklahoma.

With growth came challenges. Walker said the company decided by the late 1980s to collapse all the holding company’s banks under one new name.

It was not an easy process.

Through an internal contest, more than 500 employees each submitted an idea for what the new name should be. The winning entry — worth $2,000 to the employee who submitted it — was Heartland Bank Group.

“We had no more than announced that and started down the path of being called Heartland Bank Group when we realized our one failure: We didn’t register the name,” Walker said.

When the company did begin that process, they learned there was a failed savings and loan institution in Kansas with the name Heartland Financial.

“They told us we could not use that name,” Walker said.

Back at square one, a brainstorming session in Springdale led by Walker, Jim Walton and a few others zeroed in on Rvest — without the “A.”

“My thinking at the time was, we’ll be a financial services company in a few years, more than simply a bank,” Walker said. “We were already in the discount brokerage business, already in the mortgage business. We liked the investment division, so playing off that word, we took ‘vest’ off of the word ‘investments’ and said let’s put something with that.

“Jim said if we put a single consonant in front of it, it’ll be locked up as a unique name. And he said, how about Rvest?”

But in a giant nod to the principles of retail business, it was determined an “A” should be added to make the company appear at the top of the listings in the telephone book.

“So that’s what we did, and we’re generally the first name in the phone book … as if phone books matter these days,” Walker joked.

For a few years after the Arvest name was adopted and the charters were merged, the company’s banks retained their titles and operated as “a member of the Arvest Bank Group.”

“It was a tagline,” Walker said.

Ultimately, company leaders did decide to tie all the banks together under the Arvest name in 2000.

BACK TO ARKANSAS
In December 2014, Scott Grigsby retired from Arvest Bank as a regional executive. After 17 years in Tulsa, Walker’s reaction was immediate.

“I told Kevin [Sabin] that was the job I wanted,” he recalled. “I did not want to leave Tulsa at the time, but this was the best thing I could have ever done.”

Family reasons were the primary factor. Walker’s family and his wife’s family live in Northwest Arkansas. He is also living in the same city as his daughter, her husband and their son, who is now 8.

In Walker’s Fayetteville office are numerous photos, handwritten notes and drawings that underscore he’s the most doting grandfather any kid could want.

“The thought of getting to spend more time with him during his formative years made this [job] impossible to pass up,” Walker said.

“Don is one of the best at being a community banker and he helped set the stage for community banking within our bank,” he said. “This was a very small organization when he came here, and he has been front and center to help shape and define our culture for many years.”

Sabin, who has worked for Arvest since late 1998 and been president and CEO for the past seven years, said it would be impossible to replace Walker’s institutional knowledge.

“He has shaped and impacted so many people at Arvest, including me,” he said. “He has passed on that culture that Sam [Walton] created at Walmart and Bank of Bentonville. I’m sure I’m going to be quoting Don Walker for many years in the future, just like he has done with Sam.”

For his part, Walker said he expects Arvest to expand its footprint in the future, but not at the pace of the past 20 years. He said the combination of young leaders and seasoned veterans has the company well-positioned to do so.

He also recalled the man who hired him at Arvest. Walker said Sam Walton would be proud of the company’s evolution from a small bank making home mortgages and farm loans to a diversified financial services company.

“We’ve built an extraordinarily successful company; a large company,” he said. “I am so proud of the people who are leading it, and I will enjoy watching them continue to develop this company. That’s what I will reminisce about and be proud of.”