Northwest Arkansas residents view the region as a “great place to live” with 95% of residents being “very or fairly happy” with the region’s amenities, according to the latest Quality of Life Survey commissioned by the Walton Family Foundation. This is the third expansive report by the foundation, which also examines affordability and infrastructure trends that could limit access to key amenities that residents associate with an enriched quality of life.

“The survey allows us to understand how the initiatives we support in Northwest Arkansas enrich lives and help the region retain its unique identity,” said Karen Minkel, Walton Family Foundation Home Region Program Director. “The findings also bring attention to emerging issues that could compromise access to opportunity as the region continues to grow, partly because of its national reputation as a great place to live.”

The survey tracked progress over the past seven years in the foundation’s efforts to provide educational opportunities, cultural experiences, access to nature, better mobility and support for entrepreneurs in Benton and Washington counties. Highlights from the quality of life report include greater use of cultural amenities.

Residents reported significant increases in attendance across key arts and culture amenities. That started with Crystal Bridges Museum of American Art, with 71% of residents reporting visiting the museum over the past 12 months, up from 63% in 2015. The foundation said since 2012, the museum has experienced a substantial increase in reported attendance rates for all races. The report also found residents have attended more events at the Walmart Arkansas Music Pavilion (AMP) in Rogers at 53%, with the Jones Center for Families in Springdale seeing a 43% increase in patrons and the Scott Family Amazeum in Bentonville reported a 36% increase in patrons over the past year.

The region also continues to get high market for quality education program options with 76% of respondents viewing the region’s elementary school through higher education options to be “good or very good quality.” The report found 49% said daycare offerings were also high quality. One area of concern was the lack of affordability in quality daycare by a majority of respondents. 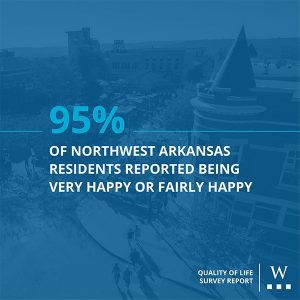 The region is also known to have one of the best trail systems in the country for biking, walking and hiking. Residents reported trails as the third most-used amenity behind parks and Crystal Bridges. Bentonville residents reported the highest trail use at 74%, down from a high of 81% in 2015. Fayetteville was not significantly different from 2015. Rogers and Springdale followed at 68% and 66%, respectively, representing a significant increase for both cities since 2015. Rough 81% of residents used parks.

The downtown areas across the region are also popular with residents as 36% of respondents reported visiting the region’s downtown areas more frequently over the past year while 49% reported no change, according to the report. Residents were most likely to go to downtowns to dine, shop or visit farmers’ markets. Respondents did not view crime as a problem in downtowns or elsewhere in the region, the report states.

While the report indicates residents are happy to live in Northwest Arkansas, there were also some areas of concern. Having limited mass transportation options was the most significant. More than half (51%) said Northwest Arkansas Regional Airport (XNA) provided flights at convenient times and 42% said the airport also provided adequate routes. Additional routes from low-cost carriers of Allegiant and Frontier did have some deflationary price impacts on fares by United and American this past summer out of XNA. The report found 28% of residents considered flights out of XNA affordable.

Other concerns by respondents include affordability. While this report did not specifically name housing affordability, Mervin Jebaraj, executive director for the Center for Business and Economic Research at the University of Arkansas, has said rising land and home prices are a growing concern for affordability. He cited specifically rapidly rising prices in downtown Bentonville.

The Quality of Life report found rising healthcare costs also continue to be a concern from roughly one in five respondents. The report said that compared to about one in three in 2012. That said, lower-income residents continued to report concerns about healthcare affordability, access and quality at higher rates than wealthier individuals.

The survey also measured diversity and inclusion. The report found 87% of residents said they felt accepted by people in the local community. However, African Americans reported a higher non-acceptance rate at 26% than whites at 4% and Hispanics at 3%. A vast majority of residents (64%) said they appreciated the exposure to different lifestyles and cultures which was slightly higher than 60% in 2015 and 59% in 2012.