A new web site, a gig on Fox News, attending high-powered fundraisers and moving her voter registration – it would appear Sarah Huckabee Sanders is settling right back into political life in Arkansas.

A rumored candidate for Arkansas Governor in 2022, Sanders is staying mum on the subject for now. She’s not publicly said she is or isn’t interested in a future run for governor, or any other office, but odds are her latest moves will increase speculation.

On Monday (Aug. 26), she unveiled a new website, SarahHuckabeeSanders.com, to keep up with her activities and to solicit speaking engagements. Last week, Sanders formally moved her voter registration to Little Rock and signed a deal with Fox News as a contributor.

“Sanders will provide political commentary and analysis across all of FOX News Media, including FOX News Channel (FNC), FOX Business Network (FBN), FOX News Digital, FOX Nation and the radio/podcast division. She will make her debut on FOX & Friends during its next live audience show on September 6th,” the network touted. 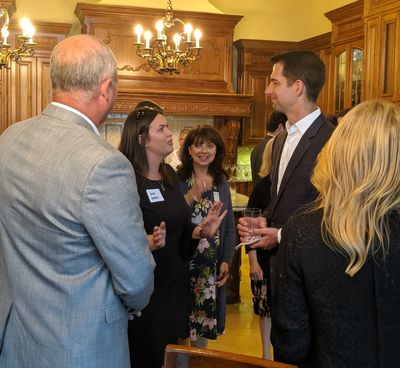 She was also seen last week at a high-dollar fundraiser for Sen. Tom Cotton, R-Ark., at the home of Bank OZK Chairman and CEO George Gleason. It never hurts to rub elbows with campaign contributors if you have future political ambition.

“You’re joking, but I can reveal to you that several months ago, I met with the Danish ambassador and I proposed that they sell Greenland to us.” Cotton proceeded to lay out his arguments for the move. He’s penned an op-ed in the New York Times further discussing the possibility. 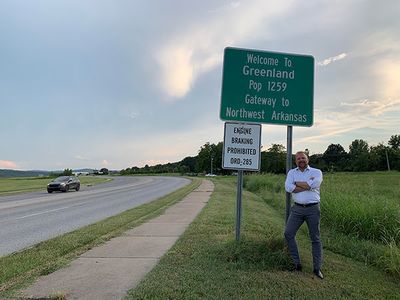 Cotton’s challenger Mahony has been using the issue to fundraise. Over the weekend, he kicked out an email that read:

“Did you hear, team? Tom Cotton has apparently been moonlighting as a real estate agent for Greenland.

“Here’s the thing: The only Greenland we need to be concerned with is Greenland, Arkansas.”

The email has a photo of Mahony standing next to a sign welcoming travelers to Greenland, Arkansas.

THE CANDIDATE FACTORY
Lt. Gov. Tim Griffin’s office appears to be a breeding ground for political candidates. Two staffers – Ben Gilmore and David Ray – say they’ll be candidates for the Arkansas Legislature in 2020.

David Ray, communications director for Griffin, also announced for the legislature. He is planning to run for the Arkansas House in District 40, currently held by Rep. Doug House, R-North Little Rock. No word yet on if House will seek re-election.

Speaking of candidates, Talk Business & Politics 2020 Arkansas candidate list will be up on the website later this week, just in time for Labor Day, the unofficial kick-off of the political season.