Presiding co-chairman Nick Hobbs, an executive with J.B. Hunt Transport, said the addition of low-cost air carrier Frontier into the market drastically cut the cost of a direct flight to Denver. Hobbs said his grandchildren live in Denver and the cost of flights from Northwest Arkansas Regional to Denver on United have been cut in half since Frontier entered the market.

He said the Bella Vista Bypass funding finally came together with much help from the Council, namely CEO Nelson Peacock, who worked to get Missouri excited about the completion on their end. Hobbs said the bypass around Bella Vista is expected to be completed by 2022 and will provide a direct Interstate 49 route to Kansas City.

Since January, the Council has focused on the goal of making Northwest Arkansas a healthcare destination by 2040. At the winter meeting in January, the Council outlined a plan to tackle four large goals that will help expand healthcare in the region. The Council said $950 million leaves the region annually as residents travel to hospitals and physicians in other regions for the services they need.

The Council’s health agenda involved getting all the major medical providers to work together to help the region become a destination for healthcare. The Council announced it would form a healthcare division within its organization to oversee this work. Susan Barrett, retired president of Mercy Health System, was the point person to work with the six major healthcare providers in the region to sign a memorandum of understanding to help the Council achieve the goals announced at the winter meeting. 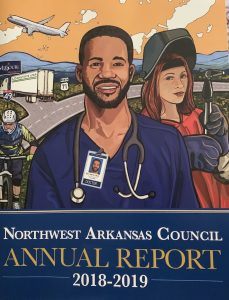 The first step was to establish the Northwest Arkansas Council Healthcare Transformation Division and hire a full-time director that will be funded by the six partners — Arkansas Children’s NW, Northwest Health, Mercy NW, Washington Regional, the University of Arkansas for Medical Sciences and the University of Arkansas. The MOU was signed by all the parties and Barrett said the director for the new healthcare division at the Council will be hired by Jan. 1 and will coordinate activities of this new division.

Barrett said the Council was able to get most of the first step completed in the past six months, and work has begun on Step 2 which increases the number of slots for medical residency within Northwest Arkansas to 200 over the next decade.

Pearl McElfish, vice chancellor for UAMS Northwest campus, is overseeing the coordination of Step 2. McElfish said getting healthcare providers on the same page was an important first step. Now that they signed a commitment, she is working with each of the parties to hammer out a plan to increase the number of residency slots. They will be woven together to fit the region’s overall goal.

“At this time there are just 60 residency slots in Northwest Arkansas and the goal is to have 200 slots within 10 years. It won’t take long to start seeing benefits once the hospitals can begin expanding their plans,” McElfish told Talk Business & Politics.

McElfish said it takes about 18 months to get a new residency program up and running and it takes three years for that program to reach its full potential. For instance, the Mercy residency plan added a couple of years ago had 11 residents in year one, added 11 more in year two and by year three the residency capped out at 33 slots.

McElfish said by year four there should be a significant expansion in the region for medical residencies. The other hurdle for accomplishing this goal is funding. She said private donations, hospital’s self-funding and public fundraising campaigns are some funding options. She said it will likely take all of the funding methods to get the regional goal met within 10 years.

Barrett said Step 2 is critical in the mission for the region to become a healthcare destination. She said every year the region sees most of its brightest medical students move out of state to take medical residencies wherever they can find them. Mercy executive Dr. Steve Goss has said part of the reason Mercy sought to expand its residency program was to keep more doctors in the region. He said doctors often begin practices in the cities where they do their residencies. Goss said having more slots in the region would be a plus for recruiting doctors for years to come. McElfish said she expects to have each provider’s plan for residency expansion nailed down by year-end, so a presentation can be made to Council in December.

Step 3 in the Council’s health goals is to work toward a collaborative research institute that would combine the expertise of the University of Arkansas for Medical Sciences, the University of Arkansas, regional health providers, regional industries to advance health services. Barrett said this is a longer-term goal but work to understand interdisciplinary research is already underway. She said Step 4 entails expanding medical education opportunities for the long-term and work toward the development of a medical school in Northwest Arkansas. She said there’s a lot of work to do before a medical school can be entertained, but said having this as a long-term goal is a critical element for the region becoming a healthcare destination.

The Council said 300 medical students will graduate within 70 miles of Northwest Arkansas by 2022 at programs in Joplin, Mo., Fort Smith and Tahlequah, Okla. Each of the regions is smaller than Northwest Arkansas.

The Council estimates $3.4 billion would be added to the region’s annual healthcare economy by 2040 if all four of the goals are achieved. This includes the addition of 6,000 jobs in healthcare. In 2018, there were 22,450 healthcare-related jobs in Northwest Arkansas. Roughly 7% of the region’s jobs are in healthcare, which is below that of peer regions such as Madison, Wis., at 9%.

At the end of Wednesday’s meeting, Hobbs handed the leadership gavel to Todd Simmons, CEO of Simmons Foods, who will be the co-presiding chairman for the next year. Simmons said he was honored to serve in this role that so many other great leaders have held, including his dad, Mark Simmons. He is the 14th person to lead the Council as co-presiding chair. Past presiding co-chairs have included former Walmart executive Lee Scott, former Sam’s Club CEO Rosalind Brewer, Arvest Bank Chairman Jim Walton, late Congressman John Paul Hammerschmidt, philanthropist Alice Walton, J.B. Hunt Chairman Kirk Thompson, and Tyson Foods Chairman John Tyson.