Incumbent State Sen. John Cooper, R-Jonesboro, will seek another term as the District 21 state senator. The district is made up of portions of Craighead County, including the cities of Brookland, Bono, Cash, Egypt, Jonesboro, and Lake City.

Cooper was first elected to the seat after former State Sen. Paul Bookout, D-Jonesboro, was forced to resign in 2014 when it was learned he had misused about $200,000 from his campaign accounts.

“In my first election, I pledged to never wavier from my conservative principles,” Cooper said. “Holding true to that, I’ve continued to fight for lower taxes, improved access to healthcare, more educational opportunity, and less government involvement in our lives.”

A member of State Senate leadership, Cooper serves as assistant Pro-Tem of the Senate and chairman of the Agriculture, Forestry, and Economic Development and Joint Budget Personnel committees. Additionally, he is a member of the Judiciary, Children and Youth, Joint Performance Review, and Joint Audit committees.

Through his five years in the Senate, Cooper has worked closely with Gov. Asa Hutchinson to lower taxes and reform state government, he said. He has voted for multiple income tax cuts, including the recent lowering of the highest state tax rate to 5.9%. 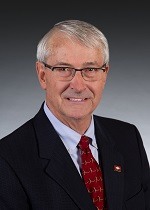 “More can be done to continue the economic growth and prosperity we are seeing in Craighead County,” Cooper said. “If a resident of our area has an idea to help accomplish that, I want to work with them to turn it into reality.”

Leading up to the 2019 legislative session, Cooper served as Senate chairman of the Red Tape Reduction Task Force, which resulted in over 30 pieces of legislation to reduce so-called “job-killing” bureaucracy. This included a bill sponsored by Cooper to improve career opportunities for people who have been convicted of a crime but are trying to improve their lives.

“If someone is trying to make a better life and they meet certain criteria, they should be allowed to have a career,” Cooper said.

No challengers have publicly declared their opposition to Cooper, but State Rep. Dan Sullivan, R-Jonesboro, is making plans to run for the seat, according to supporters.