Two new parking lots are in the works near the Walmart Arkansas Music Pavilion (AMP) in Rogers’ Pinnacle Hills area that planners say should alleviate any concerns of a parking crunch caused by two nearby construction projects on the horizon.

A paved parking lot with 280 spaces will be built, and a natural surface lot with about 1,350 spaces will be prepared on land west of South J.B. Hunt Drive and owned by Hunt Ventures, the Rogers development company owned by businesswoman and philanthropist Johnelle Hunt.

Both are expected to be open by April, in time for the first concert of the 2019 season at the AMP, which has a seating capacity of about 10,000.

“We are committed to making sure the AMP has got plenty of parking, just as we always have been,” said Tom Allen, executive vice president of Cushman & Wakefield/Sage Partners of Rogers, the commercial real estate firm representing Hunt Ventures.

The new lots will be across South J.B. Hunt Drive from similar parking lots that have been used by patrons attending events and concerts at the AMP since it opened in June 2014 — the paved lot for preferred, or permit, parking, and the larger grass lot for public parking. The grass lot — known locally as the Chuy’s lot because of its proximity to the nearby restaurant on Pauline Whitaker Parkway — is not the sole option for free parking in the AMP vicinity, but it is the closest and one of the largest.

The preferred parking lot and the Chuy’s grass lot make up most of the footprint of the construction site for Dallas-based Topgolf. The golf entertainment company announced its plans earlier this year to lease the

land from Hunt Ventures and develop the 11-acre site as its first location in Arkansas. A groundbreaking is scheduled in the spring, with an opening planned for 2020.

Allen said the two new parking lots will have as many, if not more, parking spaces as the two lots they are replacing. There will be a slight incline to access the natural surface lot from South J.B. Hunt Drive, but the appropriate work will be done to make it easy to get to.

“We will make sure it’s graded correctly and easily accessible for standard cars,” he said. “There will not be any issues for cars getting in or out of that parking area.”

Allen said the paved lot will be available for a minimum of five years. Hunt Ventures will allow patrons of the AMP to use the natural surface parking lot on dates of AMP events. There is no timeline for how long it will remain available as a parking option.

Allen said the cost and funding source to build both new lots is still being finalized.

PARKING NARRATIVE NOT NEW
Meanwhile, the imminent start of a separate construction project will ultimately yield more parking in the area.

Hunt Ventures will begin work soon on Northgate Plaza — two office buildings and a parking deck — on a paved parking lot it owns on West J.B. Hunt Drive, across from the 10-story Hunt Tower office building. The lot contains about 340 spaces that will be lost for the 2019 season at the AMP. But once construction is completed, the surface parking (120 spaces) and parking deck (420 spaces) will actually be a net gain of about 200 parking spaces once the 2020 season begins.

“There are a lot of moving parts with our projects, but we will end up with more parking in the long run,” Allen said. 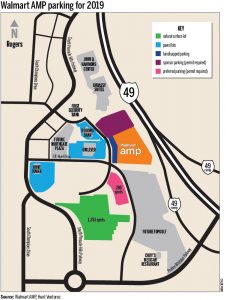 Brian Crowne, who oversees the Walmart AMP, said the parking narrative isn’t something new and didn’t just come about when Topgolf announced its Rogers plans.

“It [parking] has been top of mind for us since before we broke ground on the [AMP],” he said. “And it continues to be top of mind. Our patron experience is not just when they are inside the property. It’s [also] about how they come to us and how they get parked.”

Crowne said AMP officials meet throughout the year with Pinnacle Hills-area developers, Rogers Police Department officials and others for conversations about traffic, parking plans and shared parking options with commercial buildings in the vicinity.

“We try to stay proactively engaged with every player or agency that impacts how our patrons come to, park at and exit our events,” he said.

Those discussions now include the AMP’s $13.9 million expansion plan. The seven-month project will start in November 2019 and will, among other things, bring even more people to the area for AMP events. The project will increase the venue’s capacity to 11,000.

Crowne said he believes there will be just as many convenient parking options for patrons in 2020 as there are now. Looking even further down the road, Crowne noted a planned Interstate 49 overpass expected to be built in two to three years just north of the AMP, extending from Northgate Road east toward the Pinnacle Hills Promenade.

“I haven’t measured it myself, but I have been told it’d be the same distance to walk from the Dillard’s parking lot [to the AMP] across that overpass as it is to walk from Chuy’s,” Crowne said. “I think as we get more development, it’s going to continue to make it easier to find places to park and how to come to [the AMP].”