EDITOR’S NOTE: The following story appeared in the Oct. 29 issue of the Northwest Arkansas Business Journal. “Then & Now” is a profile of a past member of the Business Journal’s  Forty Under 40 class.

Considering the diversity of her career, that’s for the best.

Sparks Diebold caught the attention of the Northwest Arkansas Business Journal in 2006 when she was chosen as a member of that year’s Forty Under 40 class. She had just taken a job working for Panasonic, overseeing North American sales involving Walmart and Sam’s Club.

It was the latest step in her upwardly mobile professional career in the region’s consumer packaged goods arena. In 1998, three years after earning marketing and management degrees from the University of Arkansas, Sparks Diebold became category manager for Bristol-Myers Squibb. Two years later, she opened a sales office in Bentonville for PepsiCo. From 2002 to 2006, she worked as senior global category development manager for gum company Wrigley at its Lowell office. While there, Wrigley won Walmart’s Supplier of the Year award three years in a row.

Her career still involves the supplier community, to some extent. But Sparks Diebold’s resume over the past few years reads like that of an entrepreneur and economic developer, if there have to be titles.

“If you had to put a term on it, I’d say I am a strategist,” she said. “From a business standpoint, my role is to maximize return and minimize risk.”

For the past six years, the vehicle to execute that viewpoint has been a diversified holding company called SSD Holdings. Sparks Diebold has various partners in different entities that make up the company’s portfolio, but she is the sole owner.

Sparks Diebold says she has between 25 and 50 deals that come across her desk in a given year. Investments range from commercial real estate, automotive, manufacturing, retail and agriculture.

“It’s a pretty wide gamut of things,” she said. “I am extremely passionate about small business and entrepreneurship and we are working on some really exciting projects. I am the most excited I have been in a while about what’s ahead.”

Sparks Diebold keeps her primary office at her Fayetteville home, the same place it’s been for 15 years. She said as a single mother, that has offered her a certain level of flexibility.

“Being a mother is first and foremost, and there is no typical day,” she said. 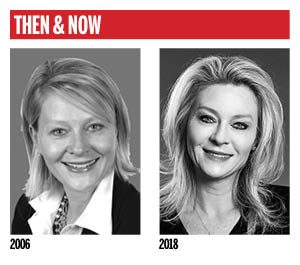 Besides the professional moments that have been critical to her career the past 12 years, Sparks Diebold said one event in her personal life helped define a large part of her community involvement.

She and her 14-year-old son Barrett, nicknamed “Bear,” are ambassadors for Arkansas Children’s, the Little Rock-based healthcare organization that opened its multimillion-dollar campus in Springdale earlier this year. Their relationship with Arkansas Children’s goes back more than a decade when Bear was diagnosed at the age of 3 with a serious disorder in which tissue similar to the lining of the intestine replaces the tissue lining in the esophagus. Without surgery to repair the damage, doctors projected he would end up on a feeding tube within five years and develop esophageal cancer by age 16.

Doctors took part of Bear’s stomach to make a new esophagus, and several months later it was clear the surgery had worked.

“Bringing world-class pediatric healthcare to Northwest Arkansas has a strong meaning for me from a personal standpoint and an economic development standpoint,” Sparks Diebold said. “It’s bringing pediatric healthcare close to home and creating high-paying, quality jobs, both of which further enhance our region.”

Sparks Diebold serves on the board for the Color of Hope Gala, Arkansas Childrens’ major fundraising event held each summer in Rogers. A strong advocate of the region’s cultural amenities, she is also a board member for the Walton Arts Center Foundation and active in the Dickson Street Merchants Association.

She is also a board member for S.A.K.E. (Students Acquiring Knowledge through Enterprise). It’s an entrepreneurship program of the UA’s Sam M. Walton College of Business, where Sparks Diebold has also been an adjunct instructor for five years.

There is a “three-by-three” strategy Sparks Diebold said she lives her life by, and she’s currently writing a book on the topic.

“Whether it’s business or in your personal life, you evaluate cost, competition and the consumer, and you make your choices using character, courage and compassion,” she said. “That’s how I approach everything.”