EDITOR’S NOTE: The following story appeared in the Nov. 12 issue of the Northwest Arkansas Business Journal. “Then & Now” is a profile of a past member of the Business Journal’s  Forty Under 40 class.

Less than a year after being named to the Northwest Arkansas Business Journal’s Forty Under 40 class in 2005, Elizabeth Shackelford thought she would try something different.

She left the American Heart Association in 2006 to work as a marketing specialist for Romance Diamond Co. Jewelers in Fayetteville. But she soon found she missed nonprofit work. While working for the jeweler, she had the opportunity to volunteer for nonprofit organizations, and in 2007, she joined Big Brothers Big Sisters as development director.

“Nonprofit has my heart,” Shackelford said.

Her office was adjacent to her existing office at the Children’s Safety Center in downtown Springdale, and about a year later, she became the development director for the organization. In 2008, she established what would become the center’s biggest fundraiser: Small Hands Big Dreams. The event has since been renamed the Dream Big Charity Gala, and the 11th annual event in July raised more than $150,000.

Shackelford, who was promoted to executive director in 2009, gives credit for the fundraiser’s success to development director Emily Rappé Fisher, who was named to the Business Journal’s Forty Under 40 class in 2016.

As executive director, Shackelford, 44, oversees daily operations, grants and grant applications. Nearly 50% of the center’s funding comes from grants, and the other half comes from fundraisers. The center has raised more than $680,000 so far this year, up from $644,760 in 2017.

“It’s been a whirlwind,” she said. “I still feel like I learn something every day, especially in the child abuse field. You’re constantly learning, but I love it.” 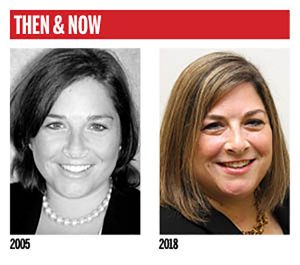 The ability to conduct the interviews and exams at the center help to reduce the number of times victims must talk about the abuse, Shackelford said. The center has a full-time therapist, and in 2017, 87 children received 687 therapy sessions. The center’s four full-time advocates work with the children and their families from the initial report, they follow up throughout the case and are with the children in court. The center’s services are free and help meet the children’s needs such as clothing and diapers, as well as assist families with expenses such as gas. Before they leave, children put a handprint on any wall of the 4,495-square-foot center, excluding the interview and exam rooms, and since 1997, children have put more than 9,000 handprints on the walls.

On Dec. 1, the center will host the 15th annual Children’s Christmas Train, which includes a 40-minute train ride on the Arkansas & Missouri Railroad from Springdale to Johnson and back. The event raised $20,000 in 2017. Shackelford explained the events not only raise the money needed to operate the center, but they also raise awareness of it and the issue of child abuse in the area. Outreach and prevention are key aspects of the center, and in 2017, it launched a program providing a curriculum for body safety education for schools throughout Washington County.

A goal she has for the center is for it to move into a stand-alone facility, possibly in a more central location within the county. She also would like to expand the therapy department.

She and her husband Scott will celebrate their 10th anniversary this year. Shackelford is the co-personnel adviser for the Chi Omega sorority at the University of Arkansas and is on the teen leadership committee for the Fayetteville Chamber of Commerce. She’s also a board member for the Children’s Advocacy Centers of Arkansas.