With more than 4,600 U.S. store locations, Walmart continues to seek opportunities to use its massive footprint in unique ways such as anchoring “town centers” to improve consumer experiences.

L.B. Johnson, vice president of realty operations at Walmart U.S., spoke recently to a group of real estate developers in Atlanta about the company’s concept to reimagine space around stores. The “town center” concept outlined by Walmart allows for development in parking lots, empty fields and other space adjacent to select Supercenters and Neighborhood Market locations, including the store  at 5000 W. Pauline Whitaker Parkway in Rogers.

“We are very early in the conceptual planning process. We’ve identified locations where there is potential opportunity for a reimagined Walmart project, ut the process ultimately depends on identifying the right developer partners and communities that welcome the type of innovative development we envision,” Walmart spokeswoman Delia Garcia told Talk Business & Politics. 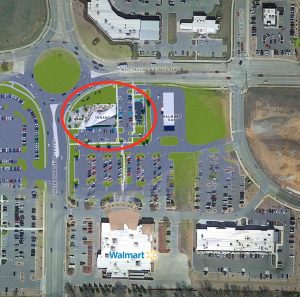 Garcia said given it’s merely a concept, it is too early to confirm what businesses might locate within the proposed space in Rogers. She said the earliest of the concept plans could take more shape next year or even longer in some areas.

“Innovation is at the center of how we run our business and how we think about the future – from the omnichannel customer experience to the way associates do their work,” Garcia said. “The Walmart Town Center concept is an exciting approach to how we serve our customers by moving beyond the store’s four walls and reimagining how we use our unique assets — our existing stores and the surrounding land — to transform how customers experience Walmart.”

The vision also is about offering a more robust and dynamic shopping experience that combines entertainment venues, local food vendors, health and fitness services and recreational opportunities in a way that connects and engages the community, she added.

Garcia said Walmart is looking for developers who have a long-term vision and are eager to partner with the retailer in reimagining the customer experience.

The concept site in Rogers is positioned within a hotbed of ongoing development with easy access to Interstate 49 and within a few yards of the Razorback Regional Greenway for pedestrian or bicycle traffic. Already announced in the immediate area is the development of Pinnacle Village, an urban lifestyle project valued at more than $200 million. Pinnacle Village will be a mixed-use, walkable urban neighborhood in the heart of Rogers’ shopping and entertainment district.

Topgolf also plans to build in the immediate area. The Dallas-based company filed its preliminary site plan with the city of Rogers on Oct. 19. The site plan rendering shows the climate-controlled hitting bays in the two-story building will be facing north, with patrons hitting golf balls toward the Walmart AMP. The building will also include a restaurant, bar and private event space The design shows a parking lot with 370 spaces and bike racks for 20 bicycles. The planning commission could review and approve the Topgolf development before the end of the year if there are no major revisions required.

Walmart serves more than 140 million customers a week in its U.S. stores, tremendous foot traffic the retailer can leverage. Analysts have said retail traffic is crucial to the success of brick-and-mortar stores. But now that most anything can be purchased online, consumers need a reason to shop physical stores.

Nii Ahene, the chief operating officer at CPC Strategy in San Diego, recently said retailers who generate excitement and unexpected experiences will be the big winners this holiday and beyond. He said pop-up stores within Macy’s in a partnership with Facebook is an example of a legacy retailer working to enhance shopper experiences.

The Macy’s launch of The Market @ Macy’s will offer 150 e-commerce brands on a two-week rotation in pop-up stores within nine Macy’s stores this holiday season. Ahene also said Walmart could benefit from re-imagining some of its brick and mortar spaces, perhaps with some of the niche, online brands it’s acquired in recent years.