EDITOR’S NOTE: The following story appeared in the Sept. 17 issue of the Northwest Arkansas Business Journal. “Then & Now” is a profile of a past member of the Business Journal’s  Forty Under 40 class.

A south Arkansas native and 1997 graduate of the University of Arkansas with history and Spanish degrees, Cromwell and her husband returned to Northwest Arkansas in 2004 from Nashville, Tenn. Her first two jobs were with NorthWest Arkansas Community College and the Bentonville/Bella Vista Chamber of Commerce before joining Bentonville’s convention and visitors bureau — now known as Visit Bentonville — in 2006.

During the next decade, Cromwell wore a variety of hats while promoting the city as a destination — first as a place to primarily host youth sporting events or corporate meetings and later as a tourist spot for art lovers, thanks to the 2011 opening of Crystal Bridges Museum of American Art.

“I think your face lights up when you’re pitching something like Crystal Bridges,” Cromwell said in 2012 when she was recognized as a member of the Northwest Arkansas Business Journal’s Forty Under 40 class. “Then, as people hear what you have to say, their jaws are dropping wider and wider.”

Cromwell has since left the bureau, where she rose to become vice president of communications. She is still in the business of promoting. It’s just a different product, one largely responsible for putting Bentonville on the destination map to begin with.

In May 2016, Cromwell took a job with the corporate affairs team at Walmart Inc. She was looking for a new challenge, she said, but didn’t want to leave Bentonville.

“I wanted to grow my career, and within the tourism market, the next level up from me was [Visit Bentonville Executive Director] Kalene [Griffith]. And we certainly don’t want her to go anywhere. I don’t think anybody does. She is very good at what she does. I decided to see what Walmart had available in the area of communications.”

Cromwell is a senior manager with the global responsibility communications team. She focuses her work on publicizing the company’s good works. Specifically, her topics include work the company does for veterans, women’s empowerment and diversity and inclusion.

Cromwell said the learning curve in the vast Walmart universe is a long one — about 18 months. To gain expertise in the subjects she was promoting, she said she listened intently and essentially became a student again. It’s helped her arrive at a point where she is ready to advance her career with the world’s largest retailer.

“I have listened and learned for quite a while,” she said. “And now I’m able to go and do. And to me, that is vital in
being successful.”

Cromwell said many of the skills she used at Visit Bentonville remain important in her job with Walmart — writing, research, storytelling and communicating. 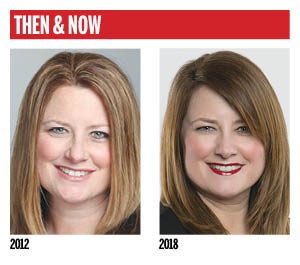 “It’s also given me an opportunity to hone skills you don’t even realize you need until you dip your toe into a different type of water, so to speak,” she said. “I am thrilled to be where I am and excited about the opportunities professionally that are available to me at Walmart.”

The most significant project Cromwell contributes to is Walmart’s Global Responsibility Report (GRR), a yearly snapshot of the company’s progress and accomplishments to increase economic opportunity, enhance sustainability of supply chains and strengthen local communities.

The most recent version was released in August, a 232-page report that Cromwell says took about nine months to complete.

Aside from her work at Walmart, Cromwell maintains a tie to the city by volunteering to host the monthly “Play Bentonville Podcast,” which is produced by Bentonville Parks & Recreation.

Though not as closely involved any longer, Cromwell said she enjoys being a spectator of the region’s burgeoning tourism industry. “I never imagined that it could be what it is today,” she said. “Seeing the things that have come to fruition makes me even more excited about what’s to come.”

Over the past six years, Cromwell’s family life has also changed in that she doesn’t have babies at home anymore. The youngest of her and her husband’s three daughters is now in kindergarten. The oldest is in fifth grade.

“I no longer have to pay for day care, which is nice,” she joked.

Cromwell said she also stays busy as a member of the vestry of St. Theodore’s Episcopal Church in Bella Vista.