The FlowBelow Tractor AeroKit includes quick-release aerodynamic wheel covers and a pair of center and rear fairings installed around the truck’s rear wheels to reduce turbulence and drag, according to the manufacturer’s website. The company also has an aerodynamic system for trailers, and about half of all the metal brackets for the systems are made by Defiance Metal Products in Heber Springs, said FlowBelow President Josh Butler, adding that 10 Arkansas carriers have at least 4,000 of the systems installed on their trucks.

The retail price for the FlowBelow Tractor AeroKit is $1,800, and when purchased through a truck manufacturer, a fleet might be able to purchase them “in the $1,500 range” including installation, he said. Most of the trucks P.A.M. ordered with the systems have been delivered to the carrier.

In 2017, P.A.M. completed a test of FlowBelow products with five trucks, followed by a test with 200 trucks. In the 200-truck test, 100 of P.A.M.’s new Peterbilt 579 trucks had the FlowBelow system factory-installed, and the other 100 didn’t have the system. After nearly a year of testing, the 100 trucks with the system had a 2.2% average fuel savings, compared to those without the system. The FlowBelow advertised fuel savings is 2.23%. 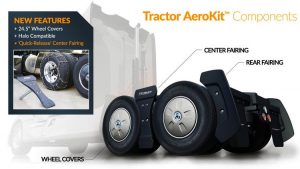 “For any fuel-saving technology that we consider, we first look to see what the OEMs are doing,” Pettit said. “A demo truck that we received with the FlowBelow system performed extremely well and piqued our interest. We then tested five FlowBelow units as an initial pilot. That was followed by a more serious 50-50 test on 200 trucks, and we confirmed the savings as well as the durability. After validating the product, we requested it through our dealer, The Larson Group (TLG), for new truck orders. TLG has since began delivering our trucks with the product already installed, thereby saving us time and money.”

The systems require no maintenance, and the carrier has had little mechanical failures or issues with them wearing out. When they are replaced, it’s usually as a result of an accident, Pettit said.

“We believe that our pursuit of fuel efficiency is a necessity and that reducing costs is always a priority,” said P.A.M. CEO Dan Cushman. “We have a program called ‘Mission MPG’ which has helped us save an estimated $3.5 million in fuel. In bonuses and prizes we give almost three-quarters of a million dollars back to our drivers every year.”

In the second half of 2018, the carrier expects to purchase 510 new trucks and 560 new trailers, while selling or trading older equipment, resulting in net capital expenditures of about $63 million, according to the company’s Aug. 3 filing with the U.S. Securities and Exchange Commission. At the end of the first half of 2018, the carrier had 1,324 company trucks, and a trailer-to-truck ratio of about 3 to 1. P.A.M. has yet to purchase the systems for its trailers.

FlowBelow started to develop aerodynamic products in 2009, and the business was incorporated in 2012. Established by aerospace and mechanical engineers, it started to grow slowly, and by 2014, growth accelerated as truck manufacturers became customers. “We’re shipping high volume to the truck OEMs,” Butler said.