Ample technology expertise ranging from middle skills of industrial mechanics to cutting edge blockchain applications is one of the missing pieces in Northwest Arkansas’ economic success, according to the Northwest Arkansas Council’s 2018 Blueprint Strategic Plan.

The plan was unveiled Tuesday (July 10) by the Council at the organization’s annual meeting in Fayetteville.

Ted Abernathy, managing partner of Raleigh, N.C.-based Economic Leadership, told Council members and guests the region is tracking fourth in its peer group of seven that includes much larger and mature areas such as Raleigh, Austin, Texas, and Provo, Utah — who each rank ahead of Northwest Arkansas. But, he said the region has already outperformed Des Moines, Iowa, and Madison, Wisc., its peer cities since 2015.

“If you are going to be a leader into the future it’s important to set loftier goals,” Abernathy said. “The region is already proving it can run with the leaders in several areas such as economic strength, business climate and future inertia, but two areas where the region is lagging its peer groups are talent development, and innovation and entrepreneurship.”

He said a majority of the stakeholders in the region agree a focus for the Council will continue to be working on workforce readiness, fostering leaders for the future, and talent recruitment that incorporates diversity and inclusion.

While the Council’s new plan outlined 54 goals, much of the meeting included the need to grow under-utilized assets such as the University of Arkansas and the Northwest Arkansas Technical Institute, and technology collaboration among the region’s top three corporate employers: Tyson Foods, J.B. Hunt and Walmart.

“I have been in Silicon Valley for the past three years and for me coming home to Arkansas and Tyson Foods it’s about trying to recruit technology talent to this region,” he said. “I have been able to recruit 16 technology professionals to Tyson Foods in the past few months and continue looking for more as we grow our tech hub in downtown Springdale.”

Spradley said Tyson Foods has been in conversations with J.B. Hunt and Walmart to work together on a consortium that would draw technology talent from around the country to work on applications for blockchain that could be used in their respective businesses. While at Intel, Spradley said, he did that sort of collaboration between corporate partners and academia and hopes to continue it here.

“Right now when I speak at events to students and tech businesses about Tyson’s transformation in technology they are quite surprised to see we are applying technology across all of our business,” Spradley said. “Many tell me they are not at that level. We plan to build out our technology hub here and I continue to recruit talent from all over the country. When I first accepted the job at Tyson my phone started ringing from my contacts everywhere wanting to know about this area. I told them all you have to do is come out and stay for three days and bring your significant other. I am finding when they come and stay three days they want to be here working.”

He said technology talent he has recruited are contacting their friends trying to recruit them to the area. He said Tyson Foods plans to add about 75 new technology jobs in downtown Springdale by the time the company’s new building opens next year. There are already about 300 information technology workers employed in Tyson’s newest building on Emma Street at the site of the company’s original headquarters.

“There is a finite number of people available locally and I have been in contact with J.B. Hunt execs to discuss the possibility of us going to hotels in large cities like Austin, San Diego or Raleigh or Boston and we start laying out technology road maps to draw in professionals who want a part in Northwest Arkansas’ growth,” Spradley said.

He said there is also the desire among the region’s three large companies to foster and support local innovation and recruit investment dollars to help with funding. He said the region produces quality graduates but they need more financial support.

UNIVERSITY RESEARCH
Another key Council goal is to help the University of Arkansas double its research funding from $145.02 million to roughly $300 million in the next three years. While Abernathy said that’s a lofty goal, UA Chancellor Joseph Steinmetz was up to the challenge. When looking at where the UA ranks among its peer cities in research funding it’s a dismal last. Three universities funded more than $1 billion annually for research, and if the UA doubles its funds it will still be in last place. The University of Texas funded $625 million in research and is fourth among the seven peer cities.

Steinmetz, a former neuroscientist and also the recent Council chairman, said during the meeting he knew a thing or two about the importance of research funding. He said the public often does not understand research money typically is spent to boost the local economy and is not part of the university’s budget. He said a $155 million research funding boost would be a benefit to the region. 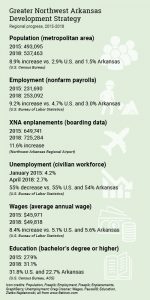 He said this year there were nine students awarded National Science Foundation grants up to $500,000. The most recipients the UA has had prior was two. Steinmetz said early projections for UA fall enrollment are slated at a record 28,000. He said it’s not just a bigger freshman class, but it’s also better retention of students which has been a goal of the institution.

Abernathy said if the UA is successful in growing research funding to $300 million over the next three years it would rank among the top 70 schools in the nation. He said reaching this commitment is going to take more than federal and state dollars, it’s also going to require more corporate and philanthropic participation.

SKILLS GAPS
Abernathy said there is also is a need for more robust middle skills training programs in the region which are typically the work of trade schools and junior colleges. He said a close examination of Northwest Technology Institute in Springdale found a need for expansion and overhaul if the region is going to ready the workforce needed going to need in the areas of ammonia refrigeration, diesel and truck mechanics, welding and other critical trade skills.

Mike Harvey, chief operating officer of the Council, told Talk Business & Politics there is much work to do in this area and the high schools are doing what they can train workers. He said NTI could benefit from more funding and that is going to mean corporate help and perhaps philanthropic aid to overhaul the facility into a modern-day trade school.

He said the NTIV staff do an amazing job, but the capacity is too small for growing employment gaps resulting from retirement and attrition.

“We are seeing what are now hundreds of unfilled jobs that will turn into thousands of unfilled jobs if we don’t get a workforce ready pretty soon. It’s going to be all hands on deck to fix this issue and the Council continues to look for solutions,” Harvey said.

OTHER GOALS
Abernathy said there are 54 goals in the new plan and some of those efforts are carried over from plans in 2011 and 2015. Nelson Peacock, Council CEO, said the need for a discount airline carrier at XNA is still a priority for the Council as fares are often higher than nearby cities like Tulsa or Fort Smith. The Council is also looking for ways to get additional funding for the Missouri portion of the Bella Vista bypass on Interstate 49. He said this is an ongoing effort because the latest federal funding round didn’t include money for the bypass completion.

There is also need for additional landfill space with Waste Management estimating about 5.5 years of capacity. The Council said it would work with businesses on recycling efforts as Waste Management seeks approval for expansion.

Abernathy also said infrastructure remains a top priority for the Council with more connected roadways and someday a better form of public transportation. He said the region is also beginning to see higher real estate prices and housing capacity constraints that most larger regions are already feeling. He said home affordability could become an issue as the region continues to grow.

Previous post
Medical Marijuana panel to hand out pot licenses again after high court ruling
Next post
Fort Smith sales tax collections up slightly in May, remain down for the year