EDITOR’S NOTE: The following story appeared in the April 2 issue of the Northwest Arkansas Business Journal. “Then & Now” is a profile of a past member of the Business Journal’s  Forty Under 40 class.

Meredith Brunen is in the midst of a career whirlwind.

Just two years ago, she was entrenched as the top development officer for NorthWest Arkansas Community College in Bentonville. For more than a decade, she helped raise millions of dollars and was a member of the Northwest Arkansas Business Journal’s Forty Under 40 class in 2012.

But in October 2016, the Fayetteville native left the school to take a job as associate vice president of university advancement at the University of West Florida, a four-year college in Pensacola. Having the opportunity to lead a college or university is one of Brunen’s career goals, and accepting the job at UWF — where she had no personal connection to the school or the area — seemed like a natural progression in that pursuit.

In less than a year, though, Brunen was packing her bags again, this time to take a job at the University of South Carolina Upstate as vice chancellor for university advancement. Her appointment was announced in July 2017, and she serves as the four-year school’s chief philanthropic officer and executive director of the USC Upstate Foundation.

The backstory of the quick pivot is this: Just a few months after arriving at UWF, Brendan Kelly — who led the school’s university advancement division and hired Brunen — was appointed chancellor at USC Upstate.

Kelly had a cabinet-level advancement position to fill at his new school, and jokingly gauged Brunen’s interest in the job.

Laughing it off, she instead was appointed by UWF to fill Kelly’s position on an interim basis, and embraced the challenge of being thrust into the role of leading an advancement team of about 60 employees.

After a couple of months, she received an unexpected phone call.

“It was a recruiter,” Brunen recalled, “who said we’ve got a pretty good referral on you. Would you consider applying for the vice chancellor’s position at USC Upstate?”

Brunen, 36, said the phone call left her with a lot of soul searching. On one hand, it was an opportunity to fast-track her career even more. The chance to work once more for Kelly was also a draw.

“He has a vision and is really somebody that has a lot of charisma and is a great leader,” Brunen said. “We have a great professional synergy, which goes a long way.”

On the other hand?

“We had just moved our family from Arkansas,” she said. “We bought a house, got the kids in school, [her husband] Kyle found a really good job. We had a lot of conversations.” 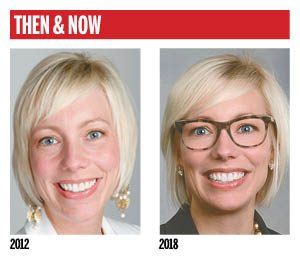 r interview skills,” she said — and go on a fact-finding mission of sorts, to see if USC Upstate would be a good fit. She was invited to campus for an interview over Easter weekend in 2017, and got a good feel for the campus and the region. When a job offer was extended, Brunen said being in Spartanburg felt like the right move to make.

“I talked to Kyle and said ‘This feels right,’” she said. “And he trustingly jumped right in, and we made yet another move.”

Brunen said she was apprehensive of being perceived a “job hopper” in the industry, which might be a liability in the future, but those concerns were put to rest by a group of mentors and by the recruiter, who gave her a simple explanation if the issue was ever brought up: You didn’t seek out anything, you were recruited.

“This is not something we want to make a trend,” Brunen joked. “We’ll be here quite some time.”

Brunen described Spartanburg — part of a metro with a population of about 335,000 — as being on the cusp of growth and development. As a major contributor to economic development in the upstate region, she said the college will play an integral role.

“We have ambitious goals surrounding growth, visibility and enhanced resources, and I’m excited to be part of the team that will help bring this all to fruition,” she said.

She and her husband have two sons, ages 4 and 3.