The Snellgrove family owned a more than 200-acre swath of land bordered by U.S. 49 and Old Greensboro Road (Arkansas 351) in northern Jonesboro. The wooded acreage had been in the family for years, but in 2013 the family decided to sell or develop the property.

Real estate developments were booming in that section of town at the time. The family approached Halsey Thrasher Harpole Real Estate Group, a real estate management firm in Jonesboro, to formulate a plan. From that, Greensborough Village was born, HTH Managing Partner Gary Harpole told Talk Business & Politics. The project could cost $500 million — a potentially conservative estimate once the Village is finished, he said.

“This will be the largest vertical investment in Northeast Arkansas history with the exception of Arkansas State University,” Harpole said. “There’s never been anything like this in NEA.”

Greensborough Village combines retail, commercial, office and other spaces with residential development. The Village is modeled after similar developments in Franklin, Tenn. When it’s completed, there will be at least 650,000 square feet of commercial/retail space, and more than 200 single-family homes. It’s estimated up to 2,500 people will live in the village once completed, Harpole said. The development team will select up to four “preferred builders” to build homes in the Village. There’s already a waiting list from interested buyers, he said.

“It’s a city within a city,” he said. “It’s a master-planned community. There’s a tremendous amount of thought and coordination put into this.”

High traffic sectors such as retail are planned for the periphery of the development, and office spaces and a downtown area are slated for the center of the project. There are two sections for residential home development, and a small lake — aka, water feature — divides the office/retail space from many of the residential spaces. The village will feature stores, restaurants, a movie theater and will have sidewalks and trails connecting every part of the area. Grocery stores, daycares, pharmacies and many other service sector businesses could be in the Village, he said. There will be space for multifamily units and two hotels. 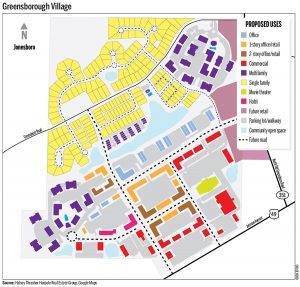 “The zoning didn’t exist in Jonesboro to allow this to happen,” he said. “It took nine months, but we were able to create two new mixed-use zoning ordinances for the city.”

Utility infrastructure including water, sewer and electricity will be installed this year. Utilities and infrastructure alone could cost up to $15 million to complete, he said. Parts of several roads within the area are under construction. The lake will serve as a retention pond, and there will be enough drainage pipes in the ground to sustain a 100-year flood event, Harpole said. Street paving and marketing will also be top priorities this year, he added. Developers have worked with Jonesboro City Water and Light.

“We’ve taxed their (CWL) engineers’ creativity,” he said. “They have been great to work with.”

Traffic has been a concern for some nearby residents and business owners. Harpole said a traffic plan has been developed with the help of the Arkansas Department of Transportation and city planners to develop a system minimizing traffic congestion in that part of the city. HTH has been hired to develop the project and Greensborough Investment owns it, Harpole said.

Negotiations with retailers are ongoing, and the hope is several will be signed this year. When the project began, organizers estimated it would take about 10 years to complete. It will probably take another seven years from this point, he said. Houses and other buildings could come out of the ground this year.

The Jonesboro Metropolitan Area Planning Commission in September approved site plans for The Landing at Greensboro, a 264-unit apartment development on 15 acres of the property. A development like this is crucial for a city like Jonesboro, Harpole said. Quality of life has been a growing issue, and the Village could be an ideal place for young professionals to live and work, he said.

“We are ready to get started,” he said.