EDITOR’S NOTE: The following story appeared in the Feb. 19 issue of the Northwest Arkansas Business Journal. “Then & Now” is a profile of a past member of the Business Journal’s  Forty Under 40 class.

As a faculty-turned-administration member at John Brown University in Siloam Springs, Ed Ericson enjoys the people and the culture of the institution as much as he did when he first joined in 1994.

Shortly after he was named a member of the Northwest Arkansas Business Journal’s Forty Under 40 class in 2002, Ericson was promoted from associate dean of undergraduate studies to vice president of academic affairs, and he has stayed in the role since then.

JBU, since its founding, has been “entrepreneurial,” he said, “always willing to try new and different things, and although the average age for chief academic officers is 59, Ericson took on the role at 37.

Ericson has a bachelor’s degree from Calvin College in Grand Rapids, Mich., and master’s and doctoral degrees from Indiana University in Bloomington. Following his father’s footsteps into Christian higher education, Ericson started his career as a history professor, and people often ask him why he quit teaching, to which he responds that he hasn’t. “I’m still teaching, just my audience is different. The context is different,” he said.

He spends 60% to 70% of his time working one-to-one with JBU personnel — meeting formally and informally — because development of faculty and staff is “the name of the game,” he said. “How do you bring in good people, develop them, help them feel a sense of direction and accomplishment?”

While at some other universities chief academic officers are tasked with heavy lifting in terms of academics, Ericson focuses his efforts more on budgets and personnel and leaves academic programs and policy to JBU’s deans.

His hands-on personnel approach means sitting on each search committee,  and tells prospective job candidates “You get the best of the both worlds” in Siloam Springs.

“You get a thriving, dynamic small town with a great Main Street and university, and you’re 30 minutes from a regional city of a half-million people, where you have the University of Arkansas and the attractions on Dickson Street in Fayetteville, up to the [Walmart] AMP in Rogers and a billion-dollar art museum in Bentonville, and so much more in between,” Ericson said. He also pointed to the mountain biking trails and the Razorback Regional Greenway, both of which he has used.

The growth at the school and the region have each been impressive since he’s been in the region, Ericson said. 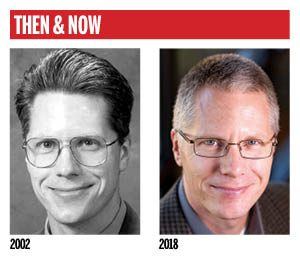 As a former member of the Northwest Arkansas Council, he said he’s enjoyed watching the growth of the region. “It’s just been fun to be on the ride.”

“That was part of what I loved when I first came, and that’s still the same. … It is accepting, caring and supportive,” he said. “I know lots of people talk about how an institution is like a family, but I truly feel that way about JBU.

The school’s mottos are “Christ over all” and “Head, heart and hand,” and Ericson said they represent a way of life. “Everyone knows those mottos, and everyone feels like it is why we’re here.”

In his free time, Ericson enjoys athletic activities. He is a “semiprofessional” racquetball player, he said, and Arkansas state champion for 2017.

He also is a championship board-gamer and has been to the Boardgaming Championships, where he got to the final table for the games Seven Wonders, Princes of Florence and Through the Ages.

He has been married since 2014 to wife Melinda. He has one 12-year-old daughter and is step-father to Melinda’s four children, ages 16 to 27.

Ericson, who grew up in Michigan, Iowa and California, said he is the “city mouse” and his wife the “country mouse.” The couple now lives on 50 acres with a dozen horses, 35 head of cattle and a donkey, and Ericson wears cowboy boots — representing a big change in lifestyle since he was featured in Forty Under 40, he said.

Ericson serves on the board for Main Street Siloam Springs and the advisory board at New Life Church.