EDITOR’S NOTE: The following story appeared in the Feb. 5 issue of the Northwest Arkansas Business Journal. “Then & Now” is a profile of a past member of the Business Journal’s Forty Under 40 class.

Johnnie Bryan Hunt, founder of Lowell-based carrier J.B. Hunt Transport Services, convinced Rick George to work for the company while he was a University of Arkansas student.

“Our families have been close friends since the early ’60s,” George said. “I had lunch with Mr. Hunt in June of 1988 during the Rodeo of the Ozarks. He convinced me that day in Shiloh Square to work at J.B. Hunt part time while I finished school, and I have never looked back.”

The Springdale native and son of poultry pioneers Luther and Helen George started at J.B. Hunt as an intern in 1988. J.B. Hunt has been the only company for which he’s worked.

After graduating from the UA with a marketing degree in 1989, he became personnel manager for J.B. Hunt. He was promoted multiple times, and in 2006, when he was director of human resources management systems, he was named to the Northwest Arkansas Business Journal’s Forty Under 40 class. He remained in the position until he became director of benefits in early 2007. In the position, he oversaw human resources technology, payroll systems and reporting. In 2011, he was promoted to senior director of benefits, and George, who is 50, has been in the position for the past seven years.

“I have had many highlights throughout my career,” he said. “I have been given great opportunities to participate in cutting-edge ideas and projects. I feel like I have contributed to the overall growth of J.B. Hunt while always maintaining the family values of taking care of our employees.”

George is responsible for the benefit plans for the company’s employees. In 2015, George spoke in favor of telemedicine as it was a benefit many employees used between 2012 and 2014. After the State Medical Board halted it in late 2014, employees had to stop using it. Telemedicine was allowed again in 2015, but patients were required to establish a doctor-patient relationship from the site of another medical provider. In 2017, the law was amended to allow for the relationship to be established wherever the patient is located using two-way audiovisual technology during the first visit.

“The availability of telemedicine, after a three-year break, has opened the door for a more convenient way to access healthcare professionals for certain medical conditions,” George said. “Telemedicine is a great alternative to in-person visits when an employee or family member is dealing with a non-emergency medical issue, such as a cold or mild infection. It can reduce both the cost of a typical doctor’s visit and the wait time to receive care.” 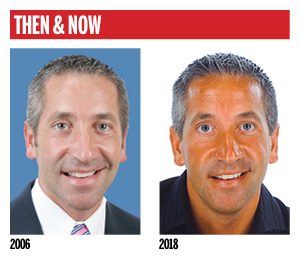 “While telemedicine is still a small percentage of overall healthcare visits, I anticipate that telemedicine usage among our employees and their families will increase as people become more familiar with the service and rely more on technology to meet their non-emergency healthcare needs.”

J.B. Hunt also offers programs to promote employee health and wellness. “While J.B. Hunt does not use the Better Health for Life branding any longer, we do continue to offer many of the benefits from that program within our medical plans,” George said. “This includes health coaching, disease management support and a free second-opinion service.”

For George, maintaining good health and fitness are important aspects in his life.

“I lost my dad when he was 56 because of heart disease,” he said. “I realized then that I wanted to take care of myself to be here for my wife, kids and even grandchildren one day.” As part of his healthy lifestyle, he teaches group fitness classes at Fayetteville Athletic Club and rides bicycles outdoors when he can.

At J.B. Hunt, George said he wants to make a difference for not only the company but also for the employees and their families and would look to an opportunity to advance within the company, should one arise.

He and his wife, Shelly, have two boys, Logan, who is 21, and Spencer, who’s 19. Their sons are members of Lambda Chi Alpha at the UA, and George volunteers as chapter adviser. George’s hobbies include biking, water skiing and snow skiing.