EDITOR’S NOTE: The following story appeared in the Dec. 11 issue of the Northwest Arkansas Business Journal. “Then & Now” is a profile of a past member of the Business Journal’s  Forty Under 40 class.

On the day he graduated Lincoln High School in May 1991, Patrick Swope went to work at The Bank of Fayetteville. He was 17, and eager to begin the only career path he wanted to pursue.

An engaging fellow, Patrick Swope not only followed in his father’s banking footsteps, he inherited his leadership skills and devotion to community.

Those are just a couple of traits that led to his recent promotion from president to CEO of Springdale-chartered Legacy National Bank. Swope assumed the title Nov. 1. It was previously held by Don L. Gibson, who had been CEO since the bank was founded in 2005. He is now CEO Emeritus.

Swope, 44, said besides moving to a different office, not much has changed in his role from an operations standpoint. He and Gibson left Bank of America in 2004 to help poultry magnate Gary George of George’s Inc. — Swope’s father-in-law — launch Legacy National. The bank opened its doors in 2005, the same year Swope was recognized by the Northwest Arkansas Business Journal as a Forty Under 40 honoree as the lender’s chief operating officer.

“That [below 60%] has always been a goal of ours and something we are proud of,” Swope said.

Swope said Legacy National’s initial growth plans were put on hold during the financial downturn a decade ago. Surviving those days, he said, is when Legacy National forged its identity as a lender with a sustainable future. 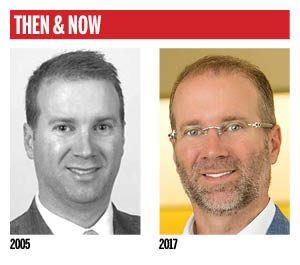 “Starting the bank was fun and bringing the capital and people together was great, but when the crisis hit, you find out about your organization,” he said. “And what we found out is that we had a bunch of people who were ready for that situation. Starting in 2008 for about the next five years, building a safe, sound bank was our goal. And we achieved that. Now we are continuing with the same type of culture to build and grow the bank.”

Legacy National built its first three locations in Springdale before branching out with a banking center on Joyce Boulevard in Fayetteville that opened in 2013, and a Rogers location that opened on Pauline Whitaker Parkway in 2014.

A sixth banking center is now under construction in Bentonville, at the southwest corner of Walton Boulevard and Southwest 28th Street. It’s expected to open in the fall of 2018.

Reflecting on his career, Swope said he is fortunate to have his business philosophy shaped by industry leaders like the late John Lewis at The Bank of Fayetteville, his father — who is also a founding board member of Legacy National — and Gibson, who recruited him to Bank of America in 2000.

“To be blessed with those types of mentors, when being a banker is what you want to do with your life, has been a great opportunity,” he said.

Swope, who earned a marketing degree from the University of Arkansas in 1996, is a past board member of The Jones Center in Springdale, and United Way of Northwest Arkansas.

He and his wife of 17 years, Julie, have two sons. They are aspiring tennis players and students at The New School in Fayetteville.