Hurricane Harvey’s reach included Arkansas’ tourism marketing budget, with the state shifting just under $300,000 in broadcast spending as a result of Houston and much of southeast Texas being slammed by the storm.

Joe David Rice, tourism director with the Arkansas Parks & Tourism Department, told Talk Business & Politics that $298,000 budgeted in the next few months to promote Arkansas’ tourism industry in the Houston market is being redirected to other markets. Rice said most in the Texas area hit by Harvey are trying to get their life back in order and likely not making vacation plans.

“We’ll move that ($298,000) maybe to Tulsa or Springfield and other similar regional markets,” Rice said.

The state is not shifting money to appeal to those who often vacation in the hurricane ravaged parts of Texas and Florida. Florida officials estimated 113 million visitors to the state in 2016, and in 2016 there were more than 45 million tourists in the Texas area hit by Harvey.

“We don’t try to take market share from the misfortune of our competitors,” Rice said.

Arkansas is replacing a planned advertisement from Texas Monthly magazine with a simple message to convey support. Rice said the new ad shows the two state flags with the message: The Lone Star state is far from alone. Arkansas stands with Texas. (See image in story of the full page ad.) 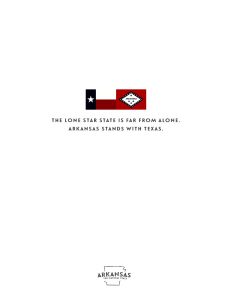 “What we’re trying to do is let our customers in Texas know we wish them the best. … We believe that’s just the right thing to do,” Rice explained.

No changes were made to the state’s $7.6 million marketing budget as a result of hurricane impacts in Florida. The primary reason is that a majority of the budget is spent in states surrounding Arkansas. Also, just 2.4% of 2016 tourists to Arkansas were from Florida, compared to 19.2% from Texas and 11.6% from Missouri. Texas and Missouri are the top two states for Arkansas visitors.

State officials estimated that just under 30 million people traveled to Arkansas in 2016, with total travel expenditures of $7.657 billion, and an estimated $503 million generated in state and local taxes. The travel and tourism industry is considered Arkansas’ second largest in terms of overall economic impact behind agriculture. The industry directly employed 121,300 in August, well ahead of the 115,900 in August 2015.